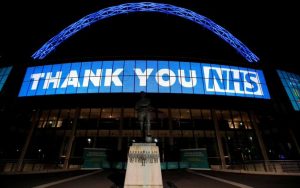 When Kunal Sapat envisioned his summer at the beginning of the year, he was looking forward to a jammed packed couple of months of football. There was no doubt that he would be draped in his St George’s flag reciting a ballad of how much he loves Gareth Southgate around Europe for the Euros.

Kunal is part of England Block 109, a supporters group that is situated in the “home end” at Wembley and they try to create an atmosphere that helps the Three Lions to thrive in. However, as the total coronavirus deaths crept over 30 000 people losing their lives, his life has revolved around serving on the frontlines of the NHS at Bedford Hospital.

At Bedford Hospital, he is a physician associate and responsible for delivering care in acute and elderly care medicine but he tells the Sports Gazette his shifts, in which he works sometimes up to seven days in a row, are strictly focussed on COVID-19.

“I don’t think we can truly put into words how appreciative we are.” 👏@OfficialTM_3 surprised England fans Kunal and Sarah, who are currently working on the frontline, to thank them for their incredible efforts.#ClapForOurCarers pic.twitter.com/U4PMNyL7Ny

“It’s been challenging because the hardest thing is seeing some patients suffer who can’t be seen by their families due to the nature of this current environment,” he says.

Kunal’s grandparents emigrated to England in the 70s after moving around Africa but, originally, they are from India. He is aware of the reported dangers NHS staff from black, Asian and minority ethnic backgrounds face by being on frontlines. A few weeks ago, Kunal also tested positive for the virus, unfortunately.

“There were a few days when I was feeling down but my symptoms were generally mild, in comparison to others, although I did need a lot of time off. Now I’m back to my full fitness and back to work,” he said

Block 109 started three years ago and has grown a lot since its formation. There are now fans who are regulars and travel to away games. This particular stand is behind the goal in the East goal. 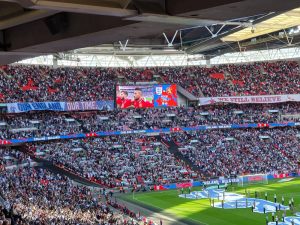 “It’s very important! If you were a player you would want to play in an atmosphere that brings the most support and brings the noise. No one wants to go to a game where the atmosphere is rubbish. Ideally, we would want the whole stadium to be rocking”

He has come to terms with the fact that the Euro 2020 has turned into Euro 2021 and all visual displays and banners have been put on hold but his group, Block 109, has come together to plan ways they can also help the community as football supporters.

“There’s this charity at the NHS called Charities Together and we thought it would be a good idea as supporters to start a funding page online, we trying to raise more or less £1500,” Kunal says.

I spoke to him further about the Euro’s postponement and he sees this as a positive for this young English side. He says this will give them more time to nurture and gain more experience in order to give Southgate more selection headaches.

Football is the last thing on his mind, I’m sure and the main focus, and like many of the staff in the NHS, is to fight against the invisible enemy. This is crucial for Kunal in order for everything to go back to normality.