Posted on 10 November 2020 by Mitchell Marshall 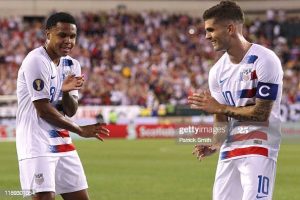 The United States men’s national team finally has the opportunity to gather their potential ‘golden generation’ for a friendly this Thursday against Wales in Swansea. All but two players on the roster are based at European clubs. After cancelling October fixtures because of Covid concerns this will be the team’s first match since an all North America-based squad played Costa Rica on 2nd February. To say a lot has changed in that time would be an understatement.

This time last year Christian Pulisic was trying to find his footing at Chelsea, Gio Reyna just a whisper of a name outside Germany, Weston Mckennie holding Schalke together with rubber bands, and Sergino Dest just a back-up for Ajax. Now the former two are rising stars with critical attacking roles while the latter have been bought and given minutes by Juventus and Barcelona respectively.

They are joined by six more footballers from Champions League sides; some like Tyler Adams are playing a crucial role, but you also have young players in-waiting such as Konrad de la Fuente at Barcelona and Chris Richards from Bayern Munich. 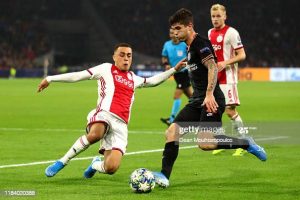 Americans playing football in Europe have tended to attract a degree of skepticism. The last few years Bundesliga teams have started taking more chances on them; they’ve discovered quality players and sold big on transfers. Before that just a handful players had broken through over the years, and mostly in England. Recent names include players like Landon Donavan, Clint Dempsey and Tim Howard, but none of them reached the level we are already seeing from a roster with an average age of 21 years and 300 days. Head Coach Gregg Berhalter must be chomping at the bit to start putting these pieces together.

“As you saw from the roster, it is a young group with a tremendous amount of talent. When you think about the opportunity to be optimistic and be excited, I think this group gives you that. It gives you a lot of optimism when you see some of these players, how they’ve been performing at such a young ag,” Berhalter told US Soccer after the official announcement.

Excited for this opportunity 🔥 https://t.co/54vqV1PHNI

While Americans have every right to be optimistic about a squad playing at higher club levels than ever before, they will need to be patient in their expectations for any huge results. This will be the first time the ideal ‘core’ of Mckennie, Adams, Pulisic, Reyna and Dest will play together.

The squad also includes ten first time call ups and two keepers who are in the Champions League, but not seeing the pitch too often in Zack Steffen (Manchester City) and Ethan Horvath (Club Brugge).

The true target is likely the 2026 World Cup where the US will host the majority of the matches. By then the core and pieces that emerge around it will be in their primes and should have played dozens of matches and big tournaments together.

Fans tend to get over excited, but the locker room should follow Berhalter’s lead with a degree of perspective.

“Our first objective is to qualify for the World Cup, and then the next objective is to play well at the World Cup and then we go from there. But we realize we do have some bit of time, qualifying doesn’t start until next September. There is a window that we have, but we have to start somewhere and we’re excited to get  this group together and start working with them,” Berhalter adds. 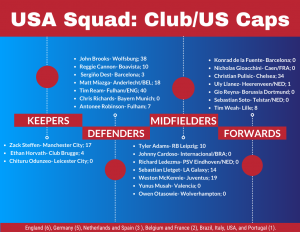 The golden generation may sound like an exaggeration when you look at European and South American countries that perennially have enough players in the big five leagues to fill multiple squads. But for a massive country like the U.S. that has always been an underdog when it comes to the men’s game, this could be the dawn of a new age where they can compete and consistently develop talent. Fourteen of these players spent time at U.S. based academies, which shows that the system is working.  The best U.S. side would still include a handful of MLS players, but this international break is key to evaluate the promising youth.

What remains to be seen is how much time Berhalter will use to see his first choice line up in this match to develop chemistry as opposed to giving the younger faces time on the pitch. The most likely scenario seems a fully fledged effort for 60 to 70 minutes against the Red Dragons and a bit more variance for the team’s second fixture against Panama on Monday in Austria.

However, he will surely take into consideration the packed schedule for players in the Champions League, especially Pulisic who has been out of the Chelsea line-up with more hamstring issues. For a time it looked like Pulisic might not be called in and to not see him on the pitch with all of these other pieces would be a great disappointment. Look for Berhalter to play his highly organized system which depends on possession built out of the back.

Steffen, John Brooks, and Tim Ream are not known as excellent passers, so it will be up to Tyler Adams to carry any possession forward to the attacking third. That has to work before Americans can look for Pulisic and Reyna to create the chances they are known for.

Berhalter is criticized at times for being too rigid in player responsibilities and drawn up attacks. For the US to see success he will need to let his attackers work creatively. Players may have larger roles than at their clubs but won’t be asked to play out of position.

Former US national team player and TV commentator Alexi Lalas summed it up quite well on social media.

A partial #USMNT. A generally young and internationally inexperienced group. But some great pedigrees/resumes. Might start to get an idea of who fits…and who doesn’t. Perception vs

y way. 🇺🇸⚽️ https://t.co/SxBVxpMfwK reality. We’ll also see if 2020 has forced Berhalter to adjust his vision/style in an

Just having players at good teams doesn’t promise success together, but this team’s biggest names are actually fairly complementary. Adams is a holding midfielder and covers tons of space defensively while Mckennie plays box-to-box and likes to get involved in the attack. Pulisic thrives coming in from the wings (preferable left) while Reyna maneuvers from the center.

The question marks include how Tim Weah is incorporated now that he is finally fit, and the need for a true striker. Werder Bremen did not release Josh Sargent because of Covid concerns. Sargent is projected to fill the striker role but has not excelled as much as hoped.

When the team takes to the field on Thursday, they will face a Wales side who have had some difficult preparations. Wales will be without manager Ryan Giggs after his arrest on allegations of assault, but superstar Gareth Bale is in the squad. The Welsh will be missing injured keepers Wayne Hennessey and Adam Davies as well as forward Ben Woodburn, who has tested positive for Covid, while Josh Sheehan, Tom King and Brennan Johnson have all earned their first call-ups.

On Saturday, @lionsofficial will play Japan at Murrayfield. @McDevitMyles speaks to @ScottHastings13 about Scottish representation in the Lions squad in 2021. https://sportsgazette.co.uk/scott-hastings-on-the-lions-what-its-given-scottish-rugby-is-a-huge-boost/

With @thehundred set to make its debut in a months time, @McDevitMyles explores how the competition can be successful within its first season. https://sportsgazette.co.uk/how-successful-will-the-hundred-be/

Sports Gazette Rugby Editor, @bidwell_alex, looks at how @CommunityGroup5 and @RichmondFC1861 are tackling rugby's class imbalance. He discussed their efforts with @DomPalacio, Richmond's Head of Community, and a Community Group employee. https://sportsgazette.co.uk/community-group-richmond-rfc-tackling-rugbys-class-issue/

Leading voices on three of the world's greatest football rivalries spoke to @CharlieWGordon about how theirs stacks up in global terms. https://sportsgazette.co.uk/football-rivalry-scotland-south-africa-spain/