Posted on 2 June 2021 by Colin Benjamin
The presence of 12 English players in the recent Europa League and Champions League finals certainly played a role in Gareth Southgate delaying naming his final 26-man UEFA EURO 2020 squad from May 25th until yesterday.

However, instead of the focus after these two finals being solely on how selected squad members performed, Marcus Rashford, Raheem Sterling and Kyle Walker suffered another infuriating round of racist online abuse.

This of course came just weeks after a social media boycott to protest such abhorrent behaviour. The irony is that many of those racist idiots will likely be cheering the very players they abused when they are on England duty.

But at the same time disgusting was racism rearing up once more, Rashford – because of his amazing efforts in the United Kingdom to help feed hungry children – was having an enlightening discussion with former United States president and one of history’s great black leaders Barack Obama. What a moment of black essence to witness that conversation.

.@MarcusRashford is way ahead of where I was at 23—and not just because he’s a better athlete. It was great talking with him about everything from our shared love of reading to how we can lift up the next generation of leaders. pic.twitter.com/mRF8H4JVbG

Now that the team has been announced, pundits will no doubt debate who is in and out until England’s opening EURO encounter versus Croatia on June 13th.

While the 11 black players in the 26 man squad have been selected on footballing merit only, one year after George Floyd’s death, when English football and many global sports have taken up the mantle to push the Black Lives Matter message via taking a knee coinciding at the point in England’s history where the largest group of talented black players are available for national football selection, deserves some acknowledgement.

This leads to consideration on what’s the greatest XI of black players to represent the Three Lions. 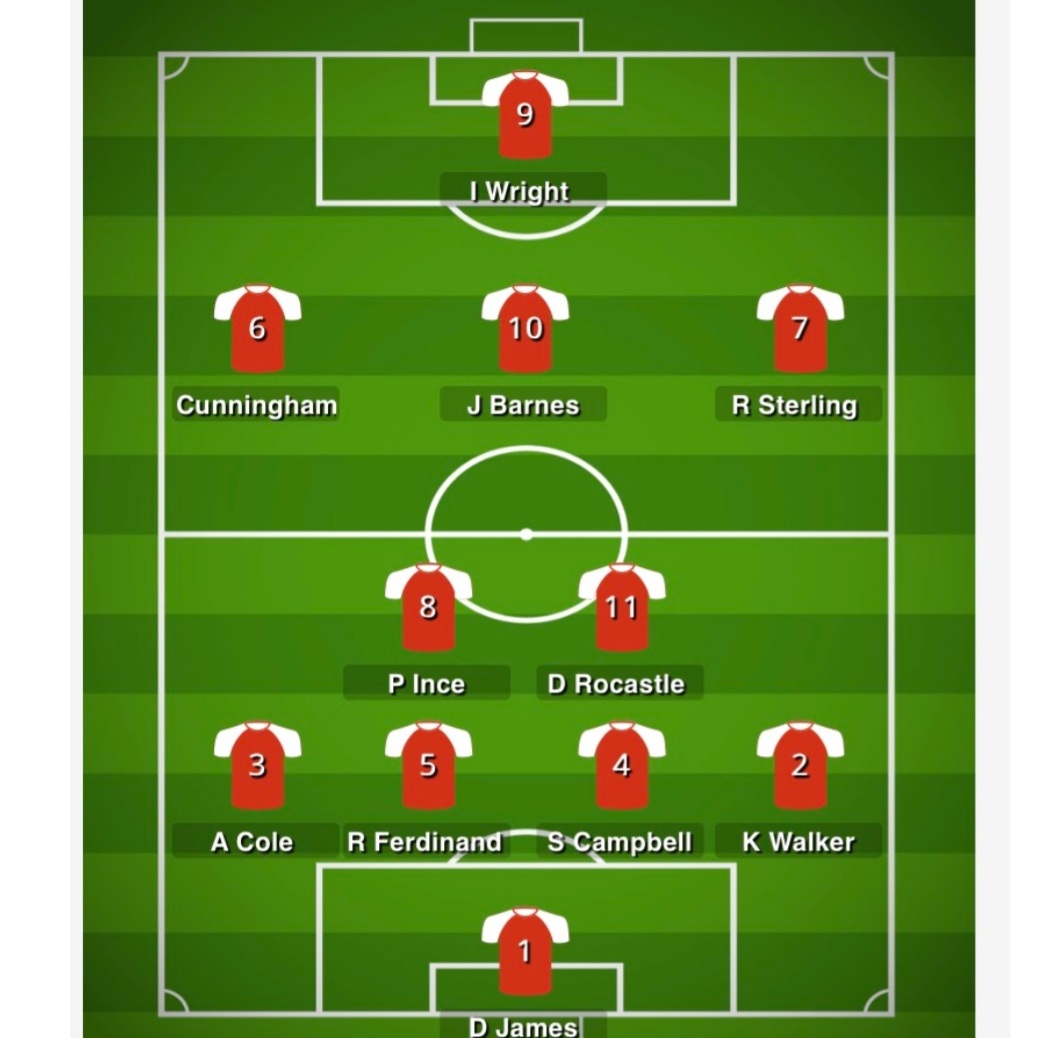 GOALKEEPER: The reasons why more black English and general goalkeepers aren’t around in European football is a different topic, but that brings into focus what a unique player David James was and arguably the easiest choice in this XI. Except for a very brief period where some bad form on England duty saddled him with the nickname “calamity James”, he was quality for the numerous English clubs he represented and for the Three Lions, where he played in the 2010 FIFA World Cup at age 39 and was later awarded an MBE for his accomplishments in football.

DEFENDERS: In front of James, in Rio Ferdinand you have arguably England’s best ever defender since 1966 World Cup winning captain Bobby Moore, unquestionably the best ever left-back in Ashley Cole and Sol Campbell, who if VAR and goal-line technology was around in his time, would have scored match winning goals to have beaten Argentina and France at World Cup 98 and Euro 2004.

As we look upon Joe Gomez today alongside the potential of players like Fikayo Timori, Ben Godfrey, Enzri Konsa, the standard set by Ferdinand, Campbell alongside Des Walker and Ledley King are certainly ones for them to follow.

Kyle Walker, who might be on the verge of becoming England’s most decorated full-back the longer he stays at Manchester City, gets the nod at right-back. One can draw a historical line from Viv Anderson, a right-back being England’s first capped black international in 1978 to the talented modern full-back quintet of Walker, Trent Alexander-Arnold, Reece James, Aaron Wan-Bissaka and Bukayo Saka.

MIDFIELDERS: In recent years the attacking midfield prowess of Dele Alli, Jesse Lingaard and Alex Oxlade-Chamberlain has given great moments for club and country. The defensive midfielder skill of Kalvin Phillips and youthful exuberance of Jude Bellingham in Germany at Borussia Dortmund has also captured the attention of many.

With Phillips and Bellingham in England’s squad now, they are following in the footsteps of black midfield trendsetters Paul Ince and David Rocastle.

Arsenal fans have never forgotten the late “Rocky” Rocastle – a quick look at his highlights on YouTube and one can see why.

FORWARDS: The four attacking positions this XI mixes the past and present. If there is any debate about whether John Barnes is England’s most iconic black player, few could question his goal versus Brazil in 1984 was the greatest ever scored by an English player.

Long before David Beckham, Michael Owen and Steve McMannam wore the legendary white colours of Real Madrid – the first English player to do so was the late Laurie Cunningham.

Cunningham was the first black player to represent England in a recognized international match at Under 21 level in 1977. The skillful and speedy winger that is a legend at West Bromwich Albion for his maverick presence on and off the field was a significant inspiration for subsequent generations of English black players to represent England.

Since Cunningham and Barnes, England have had many wingers with great pace who didn’t always live up to expectations. The best example is probably Theo Walcott, whose famous hat-trick in Croatia 2008 proved to be a false dawn. But after his early hiccups at Liverpool and England, after joining Manchester City and scoring twice in England’s famous Nations League win in Spain 2018, Raheem Sterling has established himself as a stalwart for club and country.

It’s possible EUROs selectees Rashford & Dominic Calvert-Lewin could have more dynamic careers and score more goals for club and country than Ian Wright – who was a consistent goal scoring presence for a team that won the Premier League, two FA Cups and a European title during his time at Arsenal. This should not be forgotten for a younger generation who may only be aware of him via excellent football punditry and engaging personality across various networks.