As the Arsenal players plodded around the Emirates pitch, the warm afternoon sun peeking through the clouds, emotions were mixed.

There was a buoyant atmosphere after the 5-1 victory against Everton, but also a sense of disappointment as they were pipped to a Champions League place by Tottenham.

At the start of the season, many Arsenal fans would have considered fifth a substantial jump in progression, given the eighth place finish in 2020/21.

But expectations change as the season unfolds, and a top four spot was undoubtedly there for the taking.

A difficult schedule starting with Brentford, Chelsea, and Manchester City combined with a covid wrecked squad sunk Arsenal to the bottom of the league after the third Gameweek.

They managed to scrap their way back to familiar settings as players recovered and settled into the team. Then, as Manchester United fell flat, it became a two-horse race with Tottenham. 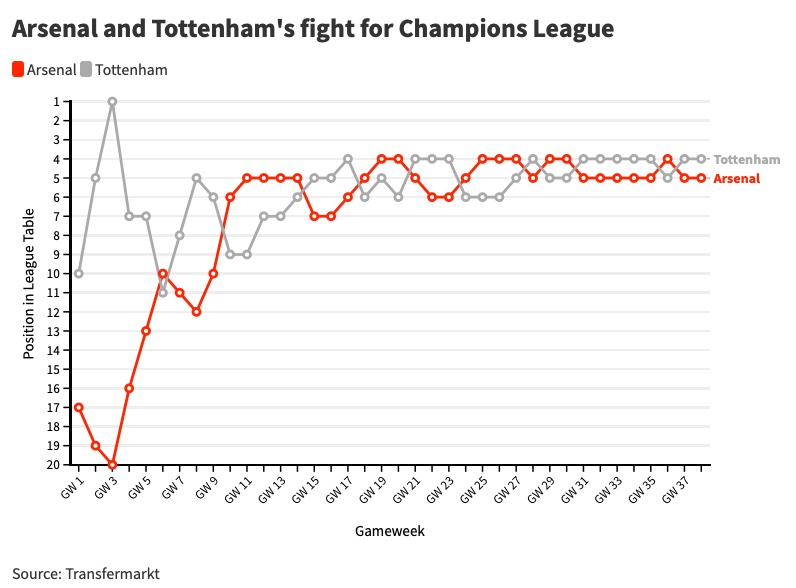 The following will use data to analyse what went wrong for Arsenal this season and see why the future is promising despite missing out on the Champions League.

They provided fortitude in defence, and stability in midfield, allowing the attack to flourish.

In their stead came Cedric Soares, Nuno Tavares and Mohamed Elneny, a significant drop-off in quality and a very different set of profiles.

But injuries should be expected, and that was the risk run by Mikel Arteta, who decided not to reinforce the squad in the January transfer window.

Compare it to Tottenham, who brought in Rodrigo Bentancur and Dejan Kulusevski, both figures vital in the turnaround from Antonio Conte.

Then there was the inexperience of the coach and team in crucial away games.

The most notable losses were against Everton, Crystal Palace and Newcastle under the bright lights of Monday Night Football.

When playing away, Arsenal lost nine games compared to four at home.

They also failed to score in 42% of their away games compared to just 16% at home. This pattern of failing to punish teams was ultimately the biggest difference between Europa and Champions League.

On the defensive side, Arsenal were fragile in away matches as they conceded 31 goals away compared to 17 at home.

This trend continued against the top six, where Arsenal conceded 17 goals away compared to just eight at home.

In tandem with Arsenal’s poor scoring form away from home was the decline of Alexandre Lacazette.

The Frenchman had a solid start to the season, adapting to become a facilitator for the team and ended the season with seven assists.

But he struggled with finishing, scoring only four goals in 30 matches, two of which were penalties.

He performed well below his expected goals tally of 7.9, which eventually saw him dropped for Eddie Nketiah.

Had the Gunners been able to rely on a more ruthless finisher, they may have snuck into the top four. 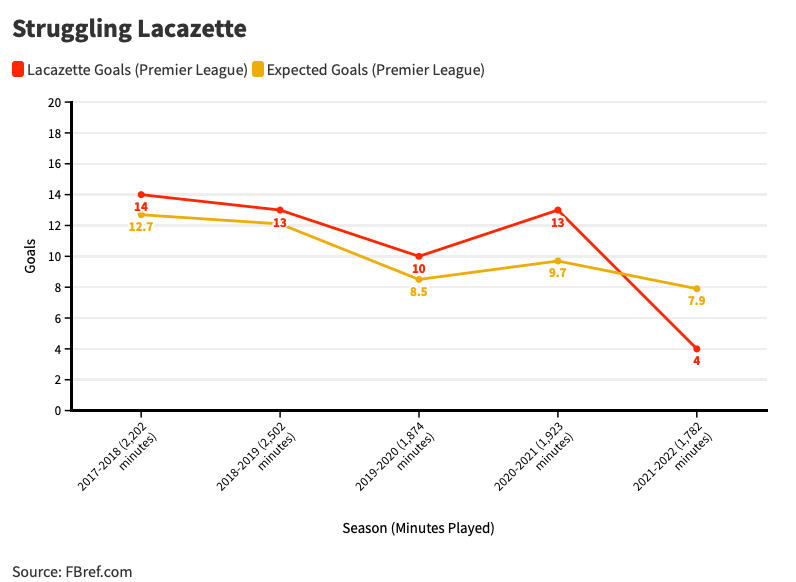 Still, despite the disappointing finish to the season, the future looks promising for this crop of players.

The table below shows that Arsenal had the youngest starting eleven in the Premier League, with an average age of 24.4. 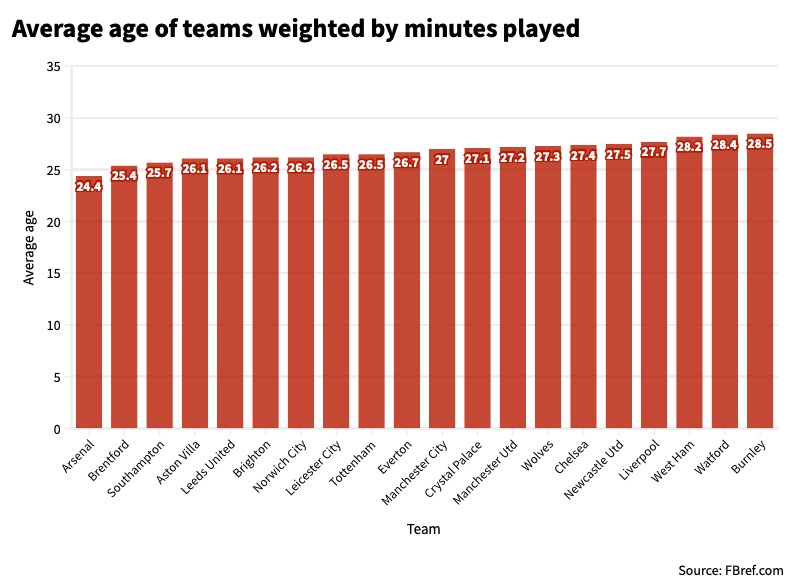 Standout players included Bukayo Saka, who had a stellar season bouncing back from his midsummer disappointment at the Euros by scoring 11 goals and assisting seven.

Alongside him, Emile Smith Rowe and Gabriel Martinelli hit double digits in goal contributions showing the signs of a capable attack.

At striker, Nketiah came on towards the end of the season and proved his worth to Arteta.

Not only was he clinical in front of goal, scoring five goals in eight starts, but he also surprised many with his attacking drive as he averaged 2.48 carries into the final third per 90 minutes.

All four developed considerably, taking on more responsibility and improving their goal contributions per 90 minutes from the previous season.

Saka was especially impressive as he doubled his contributions per 90 minutes from 0.28 to 0.58, mainly due to him cementing the right-wing position as his own. 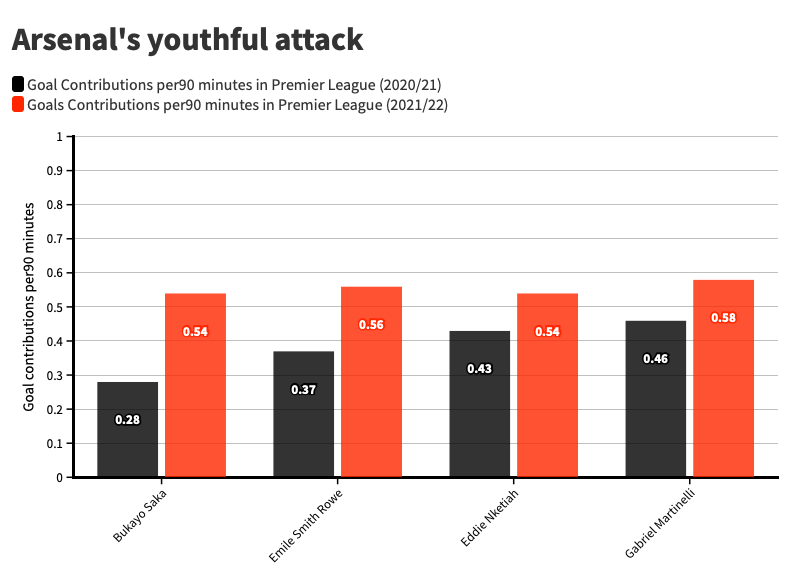 Ramsdale’s confidence on the ball and stellar saves saw him break into the starting line-up quickly.

He had a dip in performance towards the end but showed great potential with his command in the box, quick reflexes and accurate kicking.

Unlike Ramsdale, White had a tough start to the season in Arsenal’s 2-0 loss to Brentford, which saw him face heavy criticism from Jamie Carragher and Gary Neville.

Eventually, he settled and was fundamental to Arsenal playing out of the back. He aimed to push the ball forwards when possible, averaging 3.13 progressive carries per game and 3.78 passes into the final third per game.

Tomiyasu joined late in the transfer window but instantly improved the team with his sound technical ability, defensive capabilities, and physical dominance.

If this young core of players can continue their promising development with the experience they have gained this season, then the future is very exciting.

A busy summer ahead

Arteta’s managerial performance this season has earned him a contract extension, despite not quite reaching the goal of the Champions League.

There have been signs of improvement on the pitch in how Arsenal press, sustain possession, and transition.

But others will question the board’s decision to renew as he failed to finish in the top four even with a tame schedule and rivals struggling.

Either way, pressure will be at an all-time high next season as he prepares for his biggest challenge yet.

He has a long to-do list to complete this summer with a winter World Cup to account for, and Europa League matches to consider.

The current squad needs filling out, and it won’t be easy to attract the best profiles without Champions League football. However, this side is brimming with talent, and the summer signings have adapted well.

With some added experience and quality, this squad should be able to break into the top four and push for a trophy.

Stats courtesy of Transfermarkt and FBref.