Posted on 7 November 2017 by Tomas Meehan

Romell Glave burst onto the track and field scene earlier this year scooping both the 100m and 200m titles at the 2017 England Athletics Under 20 Championships .

Relatively unknown in the U20 category, 17-year-old Glave defeated many athletes two years his senior.

“I was expecting it because I trained hard for it. I talked to my coach – I told him that my aim is to run sub 10.3 [seconds for 100m] this season and he said I must go for it” says Glave.

The result came as no surprise to the youngster who ran 10.66 seconds for 100m in 2016. A year later he was preparing himself not only for victory, but also worldwide recognition. By lowering his personal best to 10.21 seconds, he became the second fastest 17-year-old in the world for 2017.

Unfazed by the credentials of his competitors at the national championships, many of whom had already represented Team GB at junior level, Glave remained focussed and fearless to take victory.

Both on the track and when I interview him, there is a calmness about Glave. In much the same way a shy teenage Usain Bolt entered the spotlight, Glave is similarly quietly confident with a true sense of humility.

“When you live in the moment, you have to feel confident because you have to trust in your ability to do great things, so when I’m on the track my shyness disappears” says Glave.

Another impressive part of Glave’s season was his consistency. He ran 33 races all year and won all but one of them. This earned him a lucrative sponsorship deal with Puma, just like his favourite sprinter Usain Bolt.

Glave, like Bolt is from Jamaica, hailing from the parish of Manchester. He started training in his homeland between 2014 and 2015 before his debut season in the UK in 2016, but it was not easy starting out in Jamaica as he was initially without a coach.

Having predicted how fast he would run in 2017 and having mastered his nerves on the track, Glave always visualised being a track and field star after an ex-400m Jamaican international athlete became his coach.

Glave recalls: “that’s where I said ‘oh I have another chance to achieve my dreams”.

It seems the 17-year-old was always talented but also has the determination and commitment necessary to succeed: “[in] my first race I ran 22.9. I had back pain, injury, but it doesn’t stop me from running because I enjoy it”.

Back in Jamaica Glave was not as focussed on athletics as he is now, having played both cricket and football.

“In Jamaica they might train almost every day and over here you don’t train everyday, so it gives you time to recover” says Glave.

But when Glave first came over to train with Croydon Harriers, his coach and full-time teacher, Paul Weston, who has also coached Britain’s second fastest 100m sprinter ever, James Dasaolu, recalls seeing Glave come down “on a cold January day” and admits that his initial reaction was that he didn’t think he’ll last very long:

“Fairly soon after that, after about a month, maybe two months of training, we could see that he had a lot of talent”.

Despite his quick progression, Glave still had a lot to work on after his first competition in the UK.

“You remember that first run you did at Wimbledon Park: 11.62”, says Weston, turning to look at Glave who is now smiling.

“Got walloped by a couple of people, didn’t you?”

Four months later, Glave would go onto run the fastest time for a British under 17 athlete in 2016 and was quickly turning into an exciting new prospect in athletics.

Though he won a superb national double the following year, Glave was unfortunately unable to represent Team GB at this year’s European Junior Championships in Italy. 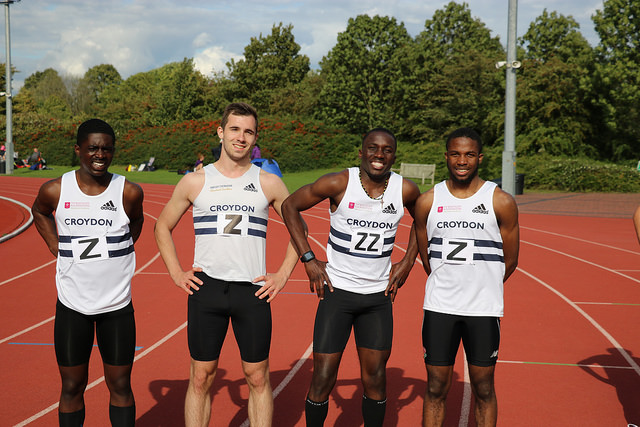 “It was because I don’t have my British passport yet, so I’ll do my best to sort it out before World Juniors, if God willing everything happens for a reason” says Glave.

Despite being the fastest U20 100m runner in the UK, Glave is always pushed by his training partners and admits that sometimes they beat him in training.

There are also some other talented sprinters, most notably Samir Williams, who have joined Weston’s group in the last couple of years and are adding to the growing success of Weston’s sprinters.

“It’s coaching experience” says Weston. “As you get older, you do get wiser, you learn from the numerous mistakes you make as a coach and I think the programme we’ve got now is a good one. It’s sort of loosely based on science but not rocket science”.

Glave adds: “They always want to challenge me in training because I said to them that if you want it, you need to train hard for it.”

“By pushing each other you can achieve great things in life”.

It is, therefore, no wonder why Glave’s favourite subject in school is maths.

As well as the determination to overcome challenges, Glave is always doing research to make himself a better athlete. “He’s a bit of a scholar of the sport” says Weston. “He keeps sending me Whatsapps with links to this, that and the other”.

Both Glave and Weston feel Glave has not had the right race to “run at full strength” in the 200m while fresh. While Weston believes that Glave’s strengths lie in the 100m, he says that Glave’s running style is similar to former British sprinter Christian Malcolm whose better event was the 200m.

“He’s got quite a phenomenal stride length for his size and that’s his real strength”.

Next year Glave will have the opportunity to be crowned World Junior Champion, either in the 100m or 200m.

“I like 200 – the bend” says Glave. While Weston agrees that he has a good transition off the bend he believes that Glave’s “energy system is better designed for running ideally about 120, 130 but as we can’t pick the distance, I think the 100 is fractionally [better] at the moment”.

If 2016 was the year he made a massive breakthrough, and 2017 was the year he stamped down his authority, could 2018 be the year Romell Glave starts to be recognised globally as a potential world champion?