Karim Benzema feasted on Chelsea’s defence at Stamford Bridge in the first leg quarter-final in the UEFA Champions league. The Real Madrid striker had broken his fast 15 minutes prior to kick off. Then proceeded to satisfy his hunger with a hattrick against the defending champions.

The quarter-final first leg of the tournament saw 10 goals scored across the four games. 60% of the goals were scored by Muslim footballers who are observing Ramadan.

Ramadan is one of the most important months in the Islamic calendar where Muslims fast from dawn until dusk. In Europe, a fast this year will last around 15 hours where Muslims abstain from food and drink.

In an interview with Esquire Middle East, Benzema was asked whether it has an impact on his regime.

“No impact, Ramadan is part of my life, and my religion makes Ramadan an obligation. For me, it’s very important and I feel good when I’m fasting.

Benzema amongst other high-profile footballers fast while playing for their club sides,

Naturally, it would beg the question: can they continue performing at the highest level of the sport? It would be near impossible to draw any conclusion on whether all Muslim footballers are affected.

So, a far smaller sample size of the players who starred in the Champions League quarter final would present an easier assessment. 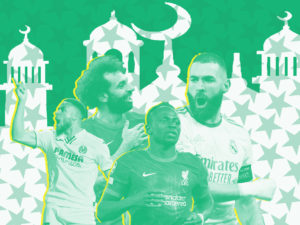 Firstly, choosing attackers makes their output far easier to quantify and judge. Comparing their stats from the 2020-2021 season during Ramadan and regular season will help draw some conclusion.

It must be noted that, some of these players may not have fasted on every match day but have all openly stated they fast during Ramadan. Therefore, it will still impact their weekly training and match preparation at the minimum.

In addition, Ramadan in recent years has occurred during the latter end of the season where big clubs are usually in the knockout stages of domestic and European cup competitions. This will also impact numbers as the level of competition is higher which may affect output.

Finally, comparing these numbers is not to conclude whether fasting improves or hinders their game, as nutrition is necessary for any high-level athlete performance. But rather can footballers maintain their numbers whilst in a fasted state for this period.

Statistic’s according to Fbref

Press (# of times applying the pressure to opposing player who is carrying, receiving, or releasing the ball).

SCA (shot creating action, which are the two offensive actions directly leading to a shot such as passes, dribbles, and drawing fouls.

Benzema contributed either a goal or assist every 95 minutes while shooting every 25 minutes during the regular season outside Ramadan.

He also averaged a press every 13 minutes and shot creating action every 33 minutes.

However, during Ramadan goal contribution fell to every 127 minutes. But he was shooting at a similar rate every 37 minutes.

Taking into consideration that many of these minutes come in the latter stages of a cup competition, or against compact relegation threatened teams. The quality of chance for Benzema is far lower which would impact his numbers.

However, he averaged a press every 6 minutes and shot creating action every 35 minutes. These are the numbers are which most likely hindered during Ramadan, but Benzema maintains his level while surpassing his regular pressing numbers. Granted, he played less minutes, Benzema’s overall play is not drastically different during Ramadan.

Salah contributed either a goal or assist every 109 minutes while shooting every 29 minutes during the regular season outside Ramadan.

He averaged a press every 6 minutes and shot creating action every 33 minutes.

During Ramadan Salah failed to score or assist in 110 minutes which is just over one game.

Arguably more importantly for this study, Salah pressed just over every 5 minutes and shot creating action every 14 minutes.

While it is a small sample size, pressing is a key component to Liverpool’s style of football so Salah’s numbers in this regard are more significant than his goal contribution as it shows he is still an active cog in his team rather than a hinderance.

Mane contributed either a goal or assist every 139 minutes while shooting every 35 minutes during the regular season outside Ramadan.

He averaged a press every 7 minutes and a shot creating chance every 31 minutes.

During Ramadan Mane scored every 115 minutes (2 goals) and had shot every 36 minutes.

As with Salah, the pressing numbers are more significant. Mane pressed on average every 4 minutes and shot creating action every 16 minutes. Mane and Salah have been pivotal to Liverpool’s success over the last few years. The have observed Ramadan across this time and there has not been a noticeable dip in form from the forwards during this period.

Danjuma played for AFC Bournemouth during the 2020-21 campaign while his press and SCA numbers are unavailable. Unlike the other three forwards, Danjuma’s goal contribution is relatively consist to his regular season numbers.

All four attackers were the main sources of goals for their team however Danjuma was arguably playing with teammates of less quality which is supported by his transfer to Villarreal the following season.

What do the numbers tell us?

Overall, the attackers’ goals and assist numbers fall during Ramadan average between 30 to 40% amongst the four.

However, maintaining the standards they have set are not solely based on the goal contribution. The pressing and shot creating action numbers displayed by Benzema, Salah, and Mane during Ramadan in the 2020-21 season are close to their usual level.

Can these footballers produce similar athletic numbers while fasting? In short, the answer is yes. Given the nature of this seasons UEFA CL, the form of Benzema, and Danjuma it would seem their goal contributions will be on the up too.