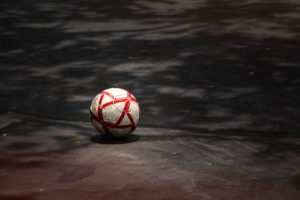 Her chest tightens uncomfortably as the towering bodies close in around her, cutting off everything. Her limbs no longer feel like her own and thousands of screams are muffled by the walls of flesh that engulf her.

Tears stream down her cheeks, though she’s unsure which are caused by distress and which by pepper spray. This morning’s tweet: “the trip of a lifetime”, now seems a lifetime ago.

A result that paled in significance

The Champions League final: European football’s greatest showpiece. Real Madrid beat Liverpool 1-0 on Saturday May 28th to win Europe’s most prestigious club trophy, but the performance on the pitch and the result seemed secondary to the chaos outside.

Whilst the teams lined up and the infamous Champions League music blared from the stadium – followed by a bizarre Superbowl-esque opening ceremony – tear gas hung in the air around thousands of Liverpool fans stuck outside.

Had to let some of these fans know the Champions League final is kicking off without them. A disgrace, frankly. pic.twitter.com/qJ3jVoLeVH

No one would blame people for thinking the pandemic had alerted big organisations to how important fans are to the game. We all remember watching matches behind closed doors and feeling the eerie silence reverberate around the grounds; the lack of atmosphere infecting the players on the pitch. But if recent European finals are anything to go by, it seems match-going fans are increasingly seen, at best, as no more than accessories to a televised event.

British journalist and author, Musa Okawonga, referred to Uefa’s organisational failures and treatment of fans as “the endless pursuit of profit beyond all else, to the point where they forget that taking care of ordinary supporters is the key to the health of the sport.”

Good grief. This grim mess is sadly consistent with UEFA's constant hijacking of the Champions League format – the endless pursuit of profit beyond all else, to the point where they forget that taking care of ordinary supporters is the key to the health of the sport.

Reports state that fans – including those visually impaired and with disabilities – were funnelled into narrow bottlenecks as they made their approach to the Stade de France, causing congestion and growing concern in the crowd. Footage from accredited journalists on the ground show fans wedged in like cattle, and others pinned against metal railings, without access to toilets or fresh drinking water.

Then came the chemicals. BBC 5 Live’s Steve Crossman reported that pepper spray was directed at fans indiscriminately, “like pesticide being sprayed over bugs to get them to go away.” A few words that paint a clear picture.

This came only 10 days after Rangers slammed the treatment of their fans at the Europa League final in Seville. Officials confiscated previously agreed items, like the notoriously dangerous product, sun cream. But even more alarming is the fact fans were in the stadium for over three hours with no access to food, water or shade in the scorching 34-degree heat.

Dear ⁦⁦@UEFAcom⁩ ⁦@SevillaFC_ENG⁩ “apologise for inconvenience?” You’re both a disgrace. Treating us like dogs outside the stadium and inside. pic.twitter.com/3MXH8kYajH

When fans begged officials for help, they were told to use the tap water from the toilets. A Rangers supporter tweeted in reply to journalist Derek Clark,

“I had to beg for two empty water bottles from a steward. My 11-year-old was feeling faint, I pleaded with another steward who said they didn’t care and it wasn’t their fault…”

As journalist Matt Pearson so aptly put it, “It’s like organisers have never been to a match as a fan. Perhaps they haven’t.”  Or perhaps only in the corporate suite – a world away from ordinary football fans faced with organisational failures and aggressive local police. Many of these supporters spend their life savings to attend European finals and yet are still seen as the bottom of society’s pile.

Wouldn’t be acceptable for tennis or rugby crowds, shouldn’t be tolerated because it’s football. These supporters will have been rinsed for cash many times over by travel companies, hotels, and for tickets – only for the organisers & police to treat them like this. https://t.co/Sr8SsnPsSA

It’s also little over a year since the fan reaction to the European Super League helped force the English clubs to pull out of their greedy scheme.  The Arsenal Supporters’ Trust branded it the “death of everything football should be about.”

After all, football fans just love going to watch their team play at the weekend – yes, even on a rainy day in Stoke – not ostentatious shows in random major world cities where the football is a mere afterthought.

It was thought then that perhaps fans were finally being acknowledged, there was even (perhaps naively) talk of English clubs going down the Bundesliga 50+1 ownership route. But truth is, ordinary fans only appear on these big organisations’ radars when they threaten to hit them in the pocket. Fans’ safety and enjoyment are not top priority, despite what they bring to the table.

I can’t help but feel this all has a similar air to our current government, looking down from their sacrosanct thrones upon the little people struggling to get by. Just like Boris Johnson and his cronies seem to be able to avoid taking any accountability whatsoever, Uefa offers no direct grievance procedures for supporters.

Meanwhile, rival fans give into tribalism and blame it all on the match-going fans, just as people from differing political allegiances point the finger at each other. Their focus is diverted from the real problem, which only benefits the people at the top. As Senior Reporter for Sky Sports, Melissa Reddy, tweeted, it only “allows and encourages the authorities to scapegoat supporters [and] abandon responsibility…”.

Incredibly dispiriting that fan safety being jeopardised continuously becomes overrun by tribalism. This allows and encourages the authorities to scapegoat supporters, abandon responsibility, not learn and massively improve planning moving forward. It's unhelpful for ALL fans.

As seasons go by and billionaires pump money into the beautiful game, the banner slogan “created by the poor; stolen by the rich” only becomes increasingly appropriate.

Featured image “Just a soccer ball” by bluesbby is licensed under CC BY 2.0.