There has been a predominant rhetoric in the reactions of the Formula 1  world since the recently revealed racist comments of 3-time Drivers Champion, Nelson Piquet (Snr.)

During a podcast last November, the Brazilian used the word ‘neguinho’ while referring to 7-time World Champion and most successful F1 driver ever, Sir Lewis Hamilton.

The word ‘neguinho’ is a racial slur that can be translated as ‘little blacky’. This Portuguese slur is commonly used in Brazil in reference to black people. Findings also show that friends also use it as a greeting amongst themselves.

Of course, in the last 48 hours, Piquet Snr. has apologized and given an excuse which thoroughly waters down the apology yet the body language of the 3-time World champion makes one wonder how many times he has gotten away with using the word.

The entire world cannot be wrong on the same count. Only close associates of the Brazilian argue that the word is not racist but away from the slur being used, it is quite alarming the prevalent tone of the response to this unfortunate incident.

The rhetoric from a sizable number of people reaching out to Sir Lewis Hamilton has taken on a particular theme in general.

A theme of “We stand with Lewis. He is a world champion that has done so much in increasing diversity in the sport”.

A few examples are:

This statement from F1 – “Discriminatory or racist language is unacceptable in any form and has no part in society. Lewis is an incredible ambassador for our sport and deserves respect. His tireless efforts to increase diversity and inclusion are a lesson to many and something we are committed to at F1”

Another from Mercedes AMG F1 – “We condemn in the strongest terms any use of racist or discriminatory language of any kind. Lewis has spearheaded our sports efforts to combat racism and he is a true champion of diversity on and off the track”

This from the FIA – “The FIA strongly condemns any racist or discriminatory language and behavior, which have no place in sport or wider society. We express our solidarity with @LewisHamilton and fully support his commitment to equality, diversity, and inclusion in motor sport.”

All these releases have one thing in common, the accomplishments of Sir Lewis Hamilton. No context of what is being reacted to, who the culprit is and no information about actions to be taken moving forward.

But this stance is problematic. And it is the reason racism will always thrive in Formula 1.

This rhetoric basically translates to “Lewis Hamilton has done so much for the sport to increase its strive towards diversity, therefore he does not deserve to be racially abused”

How about not tying the condemnation of a black man’s victimisation to his successes and contributions to diversity?

This should be the only narrative.

In all of this, it is alarming to watch that in 2022, A human being was racially abused and parties around him chose to defend him and offer their support by saying he does not deserve to be racially abused while listing his accomplishments as some sort of props.

It is quite interesting to note also that these parties chose not to mention Piquet Snr. while releasing their statements but did mention Sir Lewis Hamilton. Diplomacy definitely trumps justice for the racially abused in Motorsports and people of color within that community should be rightly alarmed.

Moving forward, the big question is if this will not be another water under the bridge. The British GP (due to take place this weekend) has suspended Piquet from the Paddock and say this could become an expulsion after its seven-day notice.

The question is what will follow the press statement F1 released over four days ago in reaction to the incident. 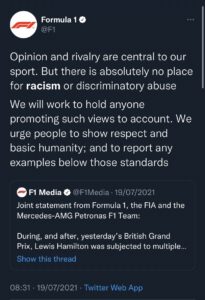 F1 promised to hold ‘anyone’ promoting racist views to account. It has been four days and it will not even name Nelson Piquet Snr.

New footage reveals that Piquet Snr. Referred to Sir Hamilton as ‘neguinho’ twice during that podcast including some terrible words to describe Keke Rosberg. He also used some homophobic slurs.

Will there be severe sanctions for Piquet, or will he be allowed to get away with it after the dust settles?

Will the dust ever settle?

Just as Sir Hamilton himself said while reacting to the racial abuse “There has been plenty of time to learn. Time has come for action”

This weekend’s British Grand Prix promises to be exciting but what would be more iconic about it would be Formula 1 taking concrete steps in addressing racial abuse. A set-in stone guideline of heavy sanctions that will follow an offender which will consist of immediate expulsion, suspension, or fines.

It is essential that more people realize that the person of color who works in Formula 1 whether as a cleaner, a fire marshal or a Driver does not deserve to be racially abused irrespective of their accomplishments /status or lack of it in the sport.