Posted on 23 August 2021 by Nathan Frazer-Carroll 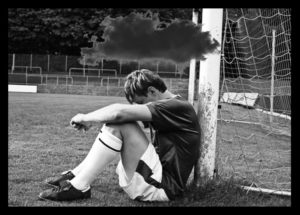 The after-care provided to young players who are released from football academies has traditionally been non-existent in the English development system.

Inside football academies, players are often made to feel at home and develop close relationships with clubs’ staff. The welcoming embrace they feel unfortunately tends to come crashing down before their very eyes.

Typically, as players are released from academies they are called in for a meeting with the coaches and their parents or they receive a phone-call making them aware of the clubs’ decision.

For a huge number of footballers trying to make it as professionals, this is where the concern for their welfare ended.

In 2018, James Aspinall, teenage goalkeeper for Bolton Wanderers was called up to join an England training camp. A call like this would seemingly indicate that his career was moving in the right direction and that key decision makers had noticed and backed his ability.

Less than two years on, and James had been released from Wigan Athletic and was forced to resort to social media posts in order to advertise his services and find a new club. 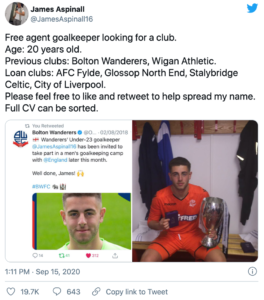 James claimed his desperation at this time was stoked by unrealistic expectations and even led him to have suicidal thoughts saying: “It’s all I’ve ever focused on, since being a small child, it was like, everybody’s dream growing up.

“It’s the feeling of rejection, you get cast to one side and you just feel, I can’t explain it, it’s like not a will to live.” He said.

Earlier this year, ITV News carried out a survey on over 100 players who had been axed from the English Football League’s top 92 clubs.

The survey found that 72% of players felt they were not given enough support by the club that released them.

On top of this, 90% of respondents reported depression or high levels of anxiety after being released from their clubs’.

The English Football League (ELF) did not want to respond to the findings but did say: “There are substantial provisions in place and a substantial amount of work undertake to try and prepare players for the time when they exit the elite football environment.”

The Professional Footballers’ Association (PFA) did accept that more could be done. A spokesperson claimed that the PFA had all the necessary tools at its disposal to help former players and that they continually urge clubs to send them details of released players.

However, they acknowledged that some clubs were much worse at providing this information than others.

These responses don’t seem to present any tangible means to address or tackle the issue at hand. It appears that clubs providing a released player with any form of after care is entirely optional.

Unfortunately, there are too many stories of players being unable to cope in situations where their future is dramatically changing shape.

In October 2020, Jeremy Wisten was tragically died by suicide after suffering with depression following his release from Manchester City’s academy at the age of 17. 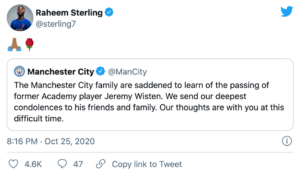 One of Jeremy’s friends has come forward since to ask that released academy players should be offered the same kind of support as Army veterans.

Specialist mental health practitioner Robert Broomhead agreed with the suggestion saying: “When they come out of an academy after such a long time it’s such a shock to the system. It feels like everything to their identity.

Michael Calvin, author of ‘No Hunger in Paradise’ – a book which provides an insight into the difficulties of competitive youth football says the events did prompt a change in Manchester City’s approach to the after care of released players.

Michael said: “They [Manchester City] do have a good reputation for the care that they offer but as a result of this they said, we’ll have monthly phone-calls with any player that we release for the first six months.”

Players being released from academies is sadly not the only circumstance where a hopeful professional has committed suicide.

Joel Darlington, 20, sadly took his own life in 2019 after suffering a series of long-term injuries which prevented him from continuing his footballing career.

Joel was considered a future star after trialling with Manchester United and representing Wales.

Instances such as this highlight even more seriously the need for player welfare management in football. Players are bred to believe they will get to the top and commit their entire youths to this endeavour.

But when the system pushes individuals to the point of suicide – something has gone horribly wrong.

Michael summed up the situation aptly saying: “Why should football wait for something horrendous to happen to put player welfare on the agenda?”

Michael is right in pointing this out. The sad reality is that football as an industry is reactive and not pro-active.

Until the ELF or the Football Association (FA) create a standard practice for released players, there will continue to be clubs who dismiss players with no thought for their welfare or next steps as a footballer or as a human being.

In the UK the Samaritans can be contacted on 116 123. Or they will respond within 24-hours on jo@samaritans.org.