Posted on 9 June 2021 by Lukas Flottmeyer

England and Germany both head into this summer’s UEFA European Championships full of hope and ambition. In the group stages, England must face Croatia, Scotland and Czech Republic to advance to the knockout rounds where they would face off against a side who escapes the group of death.

Germany are unlucky enough to be drawn in such a group. Joachim Löw’s side must prepare to face France and Portugal in their first two matches, arguably the two strongest squads in the tournament, before a much easier tie against Hungary.

The Germans could even be considered outsiders in their high-class group, but their resounding 7-1 thrashing of Latvia on Monday will restore confidence in a nation famed for their big game prowess.

If the stars align, a meeting between old foes England and Germany could be set for the round of 16. Indeed, if both sides win their group and carry on winning deep into the knockout rounds, an England vs Germany final would grace the Wembley stage. The same fixture ended in a dramatic 4-1 German triumph at the 2010 World Cup, but England are better-fancied this time round.

To settle the scores, Sports Gazette’s resident German and badge-kissing Englishman use a selection of data from FBRef.com, based on their best estimates of respective starting line-ups stemming from recent warm-up games and current injuries to decide who has the better side heading into the tournament. 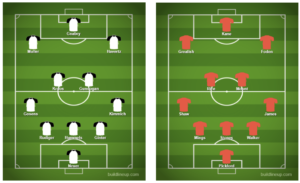 Oliver Kahn, Jens Lehmann, Manuel Neuer – three of the most recent legends to take their position in the German net. 35-year-old Neuer has no plans to call it a day on the international stage, while the former World Cup winner and Bayern Munich silverware merchant clearly outmatches Jordan Pickford in terms of pedigree and statistics.

Pickford will forever be etched into English folklore after his penalty heroics at the 2018 World Cup, but the Everton stopper falls some way short of matching his German counterpart in terms of goals conceded, save percentage or clean sheets over the course of this season.

At left-wing-back, England and Germany have two players who have truly had statement seasons. The flying Robin Gosens helped fire his Atalanta side to a sensational third place finish in Serie A, notching 11 league goals in the process which puts him comfortably in the top 1% of full-backs in Europe.

Luke Shaw, meanwhile, has had his best season to date. Although he does not bring the direct goal threat of Gosens, as shown by the statistics, he is much more willing to carry the ball forward himself and take players on. Progressive carries, passes and completed dribbles all put him in the top 20% of European full-backs so both England and Germany have a left-side to be excited about this summer.

Foden might still wake up bathed in sweat, thinking about Rüdiger’s sliding tackle in the 27th minute of the Champions League final. A tackle that perfectly sumps up the German’s season. Often not taken seriously in his home country, Rüdiger became an elite defender this season, as proven by the numbers.

Rüdiger and Mings have one thing in common: too many errors. Overall, Mings can be seen as the weakest English centre-back. If Stones and Walker take care of building up the offense, Mings‘ bad passing stats shouldn’t be England’s biggest concern. Though, Germany’s best centre-back outclasses the Villain.

Kicked out of the national team in March 2019, Hummels is back for the upcoming Euros. Rehabilitated from Löw for his last tournament, Germany hopes to see some magic outside of the boot passes again. England, on the other hand, come around with Pep’s beloved passing machine and one of the world’s finest centre-backs: John Stones.

If Hummels doesn’t fall into the fountain of youth, England easily wins this matchup. Stones‘ stats this season are galactic. Since he joined City in 2016, he has collected trophy after trophy and the numbers tell the whole story. Spoiler alert: Stones isn’t even England’s best centre-back.

Walker’s and Ginter’s numbers are not perfectly comparable because Walker is measured as a full-back. Though, looking at Walker’s green stat line is pure satisfaction. His passing is ridiculously good, he makes no errors and his old full-back days make him an elite dribbler compared with other centre-backs. Together with Stones, Walker will be the pulsating heart of England’s back three.

It’s quite obvious that Ginter can’t compete with Walker. Though, the charming German is quite good at short passing and avoiding errors. In a crazy season with ups and downs, Borussia Mönchengladbach missed the spot for next year’s European competitions. A well played tournament would increase Ginter’s value for other teams.

Comparing Reece James to Joshua Kimmich is like comparing a fantastic young right-back to one of the most talented, versatile players in the world. Thanks to Kimmich, it is Germany who have the upper hand at right-wing-back as illustrated by his statistics which appear a sea of lime green.

One thing James does have in his locker is being an out-and-out right-sided full-back whereas Kimmich spent most of this season playing in midfield. James is quick, adept at crossing and strong as an ox, certainly enough attributes to pose a threat down the England right, but Kimmich is quite simply a class apart. 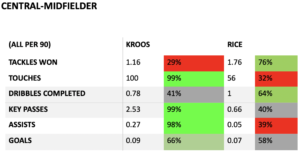 Rice clearly is the better defender and, quite surprisingly, the better dribbler as well. 31-year-old Toni Kroos is like a mature wine. Not known for running and tackling, the German still has one of the highest football-IQ and passing skills in the world today. A leading team will need Rice, a trailing team will need Kroos. 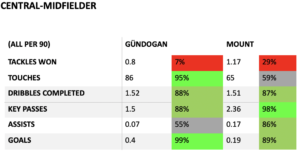 Ilkay Gündogan has had by far and away the best goalscoring season of his career. The 30-year-old has endured his fair share of injuries at Borussia Dortmund and Manchester City, but finally the silky technician has put together a consistent season, meanwhile mastering the art of popping up in the right place, at the right time to notch a top-1%-worthy 17 goals in all competitions.

Mason Mount has been a longstanding favourite for England manager Gareth Southgate thanks to his tireless work-rate and attacking threat. With 2.36 key passes per game, Mount is more influential in that department than 98% of midfielders on the continent. What Mount lacks in red hot goalscoring form compared to Gündogan, he makes up for with tackles, assists and key passes to level the playing-field. 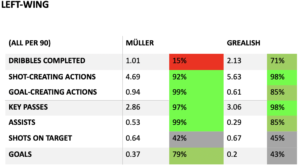 Coming back from his forced retirement in March 2019, Müller is possessed to show everyone that he was the missing puzzle piece during the last two years. In the Bundesliga, Müller does Müller things. For years, the Bavarian has been one of the most skilled and efficient attackers in Europe. His goal-creating, key passes, and assists are elite.

With Grealish, England has one of the greatest offensive players of this year’s Premier League season. His shot-creating and key passing is even better than Müller’s. While the German’s stats are supported by world footballer Robert Lewandowski, Grealish will flourish even brighter with Kane in the middle. 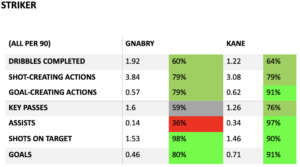 Where Germany have opted to shoehorn a potent winger up front, England have gone with a seasoned striker who is the jewel of their football scene. Harry Kane is in the top 10% of European strikers for both goals and assists, a rare accolade which saw him take home both the Premier League golden boot and playmaker award.

Gnabry is by no means a striker by trade, but he is certainly no stranger to a goal and the winger has established himself as one of the most lethal finishers in Europe. Although the Bayern Munich star does not have the physical presence of Kane to match up with defenders, he does have the pace to threaten in behind and punish teams when he gets there. As shown by the statistics, though, England certainly have the upper hand in this department. 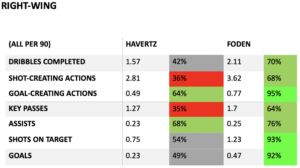 Kai Havertz and Phil Foden are two of the brightest young sparks in European football, but their season’s make for an interesting contrast.

Havertz put together a disappointing campaign overall, capped off by a brief spell of good form and a UEFA Champions League final winner against Foden’s Manchester City. Foden, meanwhile, dazzled on a weekly basis for Pep Guardiola’s side but suffered at the hands of Havertz in that all-important final.

Still, the statistics demonstrate Havertz’ largely underwhelming debut campaign alongside Phil Foden’s sparkling season, landing him in the top 10% of European wingers in terms of goal-creating actions, shots on target and goals per 90.

A Match-up to Look Forward to

Upon closer inspection, both squads seem relatively evenly matched statistically, although the Germans benefit from greater experience in defence, and the English boast a superb attacking force.

Compared to their European peers, the likes of Harry Kane, Phil Foden, Kyle Walker and John Stones unsurprisingly stand out for England, while Thomas Muller, Toni Kroos and Joshua Kimmich are similarly outstanding for Germany.

Statistics would point to Kai Havertz as a potential weak point for Germany, although the 21-year-old began threatening to hit top gear in recent weeks. For England, Tyrone Mings will be the biggest worry, not least due to his exposed frailties in the most recent warm-up game against Romania.

While both sides can only look up to the likes of France and Portugal in terms of sheer squad depth and quality, a match-up with each other would be a fascinating affair and may just be on the cards over the next few weeks.