Posted on 12 August 2021 by Nathan Frazer-Carroll 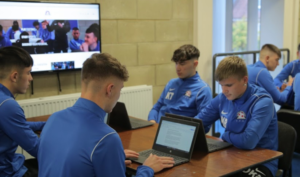 Whilst British football academies have produced many elite footballers, one fundamental problem persists with development football as an industry.

Young players are routinely disregarded by clubs and are often released with very few qualifications and with very little guidance on what life holds for them in the future.

Given that this issue was so widespread, and the chances of making it as a professional footballer is so low, Jack Cassidy, former Head Coach of Swedish Division 2 side KSF Prespa Birlik decided to combat this problem in his own way. In 2018, Jack founded The Football Education Academy (TFEA).

TFEA offer an alternative pathway for footballers after they complete compulsory education at the age of 16.

The organisation aims to incorporate football and education whilst developing young players’ life skills, preparing them for the next transition in their journey, whether that be into higher education, the workplace or into football.

Ben Seymore-Shove is Head of Education and Football at TFEA and believes that their approach maximises the potential and aspirations of players whilst continuing their involvement in a sport they have become so connected to.

As a football-based programme TFEA place a strong significance on imparting genuine life skills and they do so through a range of practices.

This is one simple way the football academy system could change for the better. The presence of people from a variety of walks of life can open a young persons’ mind. Simply knowing there are other options available to them can be enough to steer them towards what they love, or at the very least not give up if and when football is no longer an option.

TFEA use the integration of football to change the players’ perception of their own capabilities, offering sport related qualification as well as supporting a range of other subjects.

For graduates of TFEA, this often means that they are able to unlock enhanced and more diverse opportunities within education and with respect to the workplace as well.

Players enrolling here have the opportunity to gain a Level 3 BTEC national diploma in sport which is equivalent to two A levels. Whilst TFEA caters to students with higher academic ability levels, Ben says his biggest successes are the real transformation stories.

Ben said: “There are a lot of players here who have spent so much time committing to football and school just wasn’t right for them growing up, so they come to us a lot of the time not knowing what their next step in life will be.”

Ben highlighted that many other similar organisations may place their priorities elsewhere or have different metrics for success.

“For us here at TFEA, we get a buzz from taking a young lad who has come here with only three GCSE’s and moving him on to a place where he’s now discussing which university he’ll be attending.

“Before they came here they might have been written off because on paper they won’t ever achieve much in an academic sense. We really get our buzz from taking kids in that sort of situation and allowing them to apply their skills and learn in an environment that’s right for them.” Said Ben.

This kind of approach appears to be what has been lacking in the club academy system. Players who are deemed less likely to make it aren’t handled in a manner which makes their transitionary period run smoothly. They are often blindsided by the clubs’ decision to release them – something that is true in Ben’s case.

Ben played for Peterborough United F.C. from the age of 13 to 18. He was convinced that he was going to make it as a professional, a belief that all footballers striving for the top need.

The coaches around him at Peterborough however, had given Ben no indication that he would be getting released.

“I was left mulling over where my life was going next, I had trials here and there, but the transition was around a year long for me. I found myself working in supermarkets thinking, how has this happened?

“There just wasn’t a culture of sharing possibilities with young players because everything was so football-centric.” Said Ben.

Ben finally decided to go to university which was fortunately an option for him. When many hopeful professionals are released, they are let go after a point in their lives where they would usually be studying in higher or further education.

This means they are left stranded in an academic sense and are forced to transition away from football with little to no support.

Ben takes pride in the knowledge that TFEA are preparing these young players for life after football from the very first day.

The transition of young players from football into higher education or the workplace cannot be taken for granted. With so few going on to make it as a professional, football as an industry cannot continue to neglect those who don’t make the cut.

The provision of education and player welfare in football academies has improved, but stories like Ben’s are unfortunately extremely widespread.

Thankfully, organisations like TFEA exist to battle the academy systems’ shortcomings, but this is just a drop in the ocean – an ocean awash with mistreated and undervalued footballers.