Posted on 16 November 2020 by Sam Stephenson 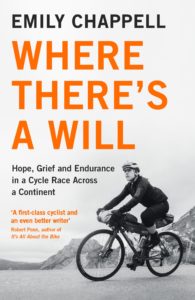 The isolation that came with the lockdown in March was something many had never before experienced. But for veteran endurance cyclist and author Emily Chappell this experience was hardly out of the ordinary.

“One of the things I love about long distance cycling is the solitude, and being a very personal thing, with just me and my little bubble of darkness and the road.”

But despite this, for Chappell it is the community – “this random group of nutters who like to do something all together” – that makes the races so special and why, despite lockdown they have still managed to stay connected.

“I have a lot in common with people I’ve never met who’ve done a race I’ve never done, because we have the same experiences and have met similar people and have similar friends in common,

they’ve heard of me I’ve heard of them and that’s still there, that’s always going to happen.”

Chappell, from Bristol, began her continuing love affair with cycling as a bike courier in London before transitioning into competitive, extreme distance riding.

Her latest book, Where There’s a Will centres on that later stage of her life, specifically the Transcontinental race, a gruelling 400km ride across mainland Europe.

Chappell takes the reader with her on this journey, from which, on her second attempt, she came away victorious in the women’s category in 2016. Yet despite such mammoth feats of endurance, she claims the scale of her and her colleagues’ achievements still amazes her.

“You never completely lose sight of this and one of things I love is doing an organised ride, coming together at the café stops and having a bit of a chat, and it is a bit normal because it’s what you’re all doing, and you all know this is a thing people can do, no one is there like ‘Omg this is my biggest ride ever!’” 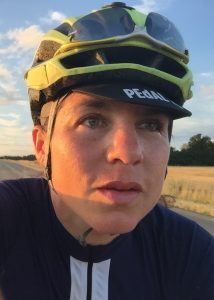 Emily Chappell on the road and in the zone!

Dealing with the mansplaining MAMILs

Being a female cyclist does bring with it its own challenges, specifically in the form of MAMILs (middle aged men in Lycra), with whom Chappell has had a number of run-ins.

“I often have the experience, where somebody has met me on a ride and they are nine times out of ten a man in his 50s. And he will start to advise me on cycling, or ask how I’m getting on or explain something to me, or tell me I’m doing so well keeping up, so many things.

“I was once on a ride with some guys, and one of them had a puncture, so I helped him to fix it as I was faster than he was, and while he was just putting his wheel back on his bike I was leaning against a wall watching.

“We were in a village and an old man walked past and said to me, ‘It’s nice having an onboard mechanic isn’t it?’, assuming that this guy had just fixed my bike for me.”

It is clear that such incidents, despite seeming small, have stuck with Chappell, and are part of a bigger battle of being, in her words, “continually underestimated”. And yet despite this, such irritations, she says, form little of her own personal motivations for riding.

“Proving people wrong is enjoyable sometimes, but that’s not why I do it. I do it because I just really love it and it gives me so much, even on the bad days.”

The love that Chappell has for the freedom of cycling on the open road is something that runs constantly through her book, and goes some way to explain why she, and others in her world, continue to do what they do. Indeed, as it has with so many things, Covid-19 forced endurance cycling to adapt, and become, if possible, more solitary for the riders without support crews.

For Chappell, these changes in the current climate are something she welcomes, citing GBDURO, a 200km self-sufficient ride from Land’s End to John O’Groats, as an example of where a competition has gone ahead, albeit under stricter rules for riders.

Indeed, to give one a sense of just how self-sufficient a racer is, getting water from a public tap is the only contact with the wider world permitted to them. Yet that does little to dissuade fanatics like Chappell: “I think this new race will be the toughest thing anyone has ever done. But it sounds incredible.”

So what about the future of cycling, post lockdown? For Chappell, she very much sees Britain as going into a second wave (the good kind) of cycling enthusiasm, but with one crucial difference.

“This time all the second wave people have got all the first wave people here to welcome them, so hopefully we’re all ready and saying ‘yes I can give all the advice that you want I can take you out on your bike, I will tell you where all the good bike shops are, and any problems you have I wanna keep you on the road so I’ll help.’. So they’re going to be bombarded with our enthusiasm!”

Only time will tell if this new burst of cycling fervour will endure like it did back in the hazy days of London 2012, but one thing is for sure, Emily Chappell’s love of the bike is certainly not going anywhere.