Posted on 4 December 2020 by Nathan Frazer-Carroll 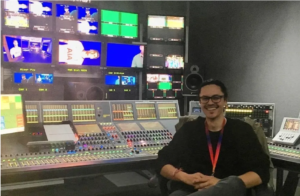 Adam Peri is a sound engineer from New Zealand currently working for Sky Sports in augmented audio, or in other words, fake crowd noise. He’s provided a window into what goes on behind the scenes and what it means to be the virtual twelfth man.

When Sky first debuted augmented audio, it was far more basic than their present set-up. This was largely due to the fact that they were embarking on a completely novel journey. The ease with which one could become overwhelmed meant that only a handful of sounds were made available for use.

This resulted in a somewhat uncomfortable viewing experience, prompting many questions about the practicality and usefulness of augmented audio. As with any new initiative, mistakes are ironed out and efficiency is improved over time.

There is no doubt that the quality of augmented audio has improved since the project’s inception. Peri explains that Sky actually use an array of microphones scattered on the edge of the pitch and even in the stands.

Every game broadcast by the network is recorded in this way. Behind the scenes, engineers at Sky’s Osterley studios will then transfer that audio onto one precious hard drive.

The audio is sent to Electronic Arts (EA) and meticulously edited with unwanted sound removed as pitch-side mics pick up chants, individual voices, the referee’s whistle and even coaching staff conversations. That final product is what you hear on EA’s flagship FIFA series.

“I don’t know how they did it, some of those chants are just so clean,” said Peri. “I checked the audio Sky recorded from a Derby County match recently and all you can hear is whistles, kicks and coaches swearing.

“EA must have some wizards in their studios clipping all this stuff somehow – [it’s] honestly mind-blowing.”

Sky and EA have thus created a reciprocal relationship, with EA happily agreeing to send their cleaned-up recordings back to Sky for augmented audio use.

This is how Sky manage to deploy such precise chants, bespoke to any given match. This evolution from using generic crowd noise to the most up to date chants was a game-changer.

Come match day, Sky face an equally difficult prospect, simulating the atmosphere and essence of a full house. With a task so tricky, it’s easy for errors to creep in. 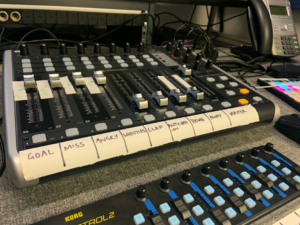 In the event that a mistake does happen, there is surprisingly no fail-safe to ensure the fans at home hear the correct sounds. Peri recounts stories of accidentally triggered audio equipment, resulting in cries of misplaced booing: “Luckily we’re not in direct correspondence with fans at home because I’m sure we’d be getting slated some of the time.”

Peri remarks that mistakes creep in at hit the two game mark, and describes the responsibility of covering consecutive matches as mentally draining. This is understandable when one considers the number of crowd reactions occurring in a single match.

In Peri’s work he uses ‘side-chain compression’, meaning the volume level of one noise is affected by the volume level of another. This means that as teams approach the final third, the sound engineer will begin to turn up the crowd anticipation noise, at which point the fan chanting sound phases itself out.

Following this comes the most challenging part of the job – gauging whether the ball will hit the back of the net, which Peri must do himself. Cheering and despondent sighs are not similar sounds, so accuracy is key. 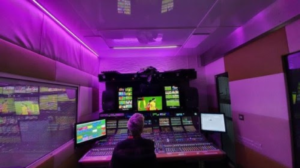 However, a mentally draining day trumps not working at all. Peri was one of the many people working in the world of sports media who were significantly affected by the postponement of the 2019/20 football season.

Despite having little to no opportunities to work during the UK’s lockdown which began in March, he was surprised to receive a letter in the post notifying him that he would now be classed as an essential worker.

The Premier League’s Project Restart meant he could begin travelling into the studio while much of the UK had been furloughed or laid-off: “It’s weird being considered essential, personally I don’t think the role is.”

Although Peri is pleased he is able to provide a semblance of normality for fans watching at home, he knows he’s merely filling the hole left by their absence and will return back to regular sound engineer duty when the time comes.

Peri concludes: “My friends and I joke about the fact that the Premier League should pay the fans to attend matches because of just how much they add. Fans are so valuable.”