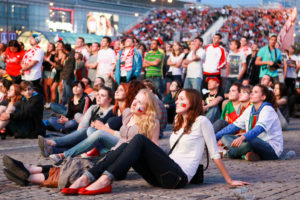 Women’s football is on the rise and female journalists and pundits are getting to showcase their knowledge, regularly covering the biggest matches in the sport.

It appears that women may finally be edging towards the chance of a seat at the metaphorical table.

However, despite this progress, a 2021 Football Supporter’s Association (FSA) survey showed that 44% of female football fans are still being told they “know a lot – for a woman”.

This begs the question, are women really being accepted into the football world?

The Sports Gazette’s Football Editor, Ruby Malone, spoke to a lifelong Stoke City fan and co-founder of the #HerGameToo campaign to find out more.

Featured image “Euro 2012, kibice / Euro 2012 football fans” by Ministry of Foreign Affairs of the Republic of Pol is licensed under CC BY-ND 2.0.