Six Races to determine who wins the 2021 Drivers Championship title. Who’s got an edge? Where? When?

In a season where tides have turned and fortunes seem to be changing, six points separate Mercedes’ Lewis Hamilton and Red Bull’s Max Verstappen as we approach the expectedly dramatic end of the 2021 Formula 1 season.

The 72nd F1 World Championship season has indeed lived up to the expectations especially for fans and stakeholders of the sport who have long desired a new Championship winner and more importantly to some others, an end to the Mercedes/Hamilton dominance.

Moving into the closing stages of this season with a six-point gap to fill for Hamilton and a Driver’s Championship lead for Verstappen, what are the most likely expectations from the final six races to come?

First is the United States Grand Prix which holds at the Circuit of the Americas (COTA) in Austin this weekend. This circuit is traditionally known of late as a strong point for Hamilton who has won there a record six times. It will be quite interesting to see how things shape up at this track after a year of absence due to Covid-19.

The last winner at this circuit was Mercedes’ Valtteri Bottas and interestingly he goes into the weekend as the winner of the race before this one (Turkish Grand Prix). At this race, Bottas will fancy his chances at a win while also helping amass points to give Mercedes the edge in the Constructor’s Championship.

The aftermath of the Turkish Grand Prix and the many questions being raised by Red Bull about the Mercedes engine set up should also shape up for intensive drama as fans wait to see what both constructors have up their sleeves in terms of strategy.

From Austin, to Mexico City for the Mexican Grand Prix on the 7th of November at the Autódromo Hermanos Rodríguez.

This is a circuit where previous statistics show an alternation of wins between the present title challengers in the last 4 years, giving both the opportunity to take maximum points.

This sure looks like one to enjoy, importantly with the fanfare that Mexico brings to the sports. It’s also a home race for Red Bull’s Sergio Pérez who would be contributing his quota to ensure wins for the team and Max at the end of the season. Although, it is safe to say that a whole lot here will depend on results from the previous race in terms of race approach and strategy.

On Sunday the 14th of November Interlagos hosts the Brazilian Grand Prix. Interlagos is an unforgiving circuit popularly known as tough and demanding with many challenging corners, elevation changes, a rough surface, and little room for error.

Despite these challenges we can’t take away its novelty as one track with a great room for overtakes especially with indications that a sprint race could be involved.

This circuit also holds its fair share of historic F1 moments like Fernando Alonso becoming the youngest ever Formula One World Champion at the 2005, Michael Schumacher bidding the sport goodbye for the first time in 2006 and famously, Ayrton Senna winning his home Grand Prix for the first time in 1991.

The drivers have got so much to do here. Verstappen and Red Bull hold the bragging rights from the last outing but two-time Interlagos winner Hamilton would rate himself up for the challenge at the home of his F1 role model, Ayrton Senna.

Points from the sprint race will be vital in the fight for the championship.

From a staple track, we go to a debutant on the 21st of November. The Qatar Grand Prix is to be hosted at the Losail International Circuit.

This circuit is one whose advent generated lots of criticism, especially in the face of alleged human rights violations in the host country and the fast-growing notion that in F1 cash is truly king, as pointed out by Hamilton a while ago.

Having hosted MotoGP races since 2004, F1 fans will be keen to see what makes this circuit unique.

Points are up for grabs and a driver and a constructor will also get to put their names in the annals of this track’s history.

One might want to tag it a level playing field for both Verstappen and Hamilton. The experience of a new track is a welcome dose for thrill and unpredictability.

For the penultimate race of the season, we move to yet another new track in the Middle East and another nation widely condemned for human rights violations. The streets of Jeddah come alive for the Saudi Arabia Grand Prix on the 5th of December.

The sequence and the momentum within these times as far as the Driver’s and Constructor’s Championship battles are concerned, is predicted to be quite intense. Human rights discussions will definitely take center stage at both the Saudi Arabian and the Abu Dhabi Grand Prix but if it’s a weekend that shapes up to be the decider, lightning and fireworks will abound.

And finally, we enter the season’s grand finale, The Abu Dhabi Grand Prix at the Yas Marina Circuit on the 12th of December.

However, it ends on this circuit, whether we go into it as a championship decider or not, there is a constant spectacle the world awaits – doughnuts.

Bar any unforeseen change this race should be quite historic. With the move of George Russell to Mercedes, Bottas to Alfa Romeo, Alex Albon coming back to join Williams, and the final goodbye to Kimi Raikkonen after 21 years of racing. Teams will give their all to end the season on a high as the final spots in the Drivers and Constructors Championship will be decided.

For Verstappen it’s the best opportunity of his career to date to become World Champion. A good car, great strategists and a healthy lead would do the job nicely.

For Hamilton, this is quite unfamiliar territory but the W12 has what it takes to pull a surprise overtake. Essentially, both men must avoid DNF from now until season’s end. 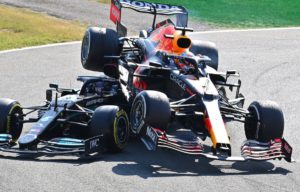 2021 sees an end to an era in Formula 1 and one can hope that events from the remaining races do give us more memories of one of the best F1 seasons of this outgoing period.