Posted on 5 November 2020 by Myles McDevitt 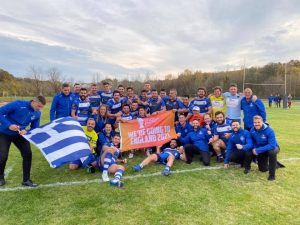 When the Rugby League World Cup kicks off in England this time next year, Greece will play in the competition for the first time.

The story though of how Greece made next years World Cup is a tale of trial and tribulation, with the team facing many obstacles on their way to the sport’s biggest stage.

Greece’s rugby league roots can be traced back to Australia. In 2003, efforts were made by Australians living with Greek heritage to play the sport, however rugby league itself didn’t take off in Greece until nine years later.

President of the Greek Rugby League association George Stilianos detailed how the sport started out in Greece, saying: “When we started in 2012, it was very hard.  Unlike many other countries, we did not have any expats to help out with their experience, nor did we go down the common path of just trying to convert local rugby union players. So starting from absolute scratch is a slow and tough process, but one that I believe gets the best results.”

However, a few years into that domestic competition, disaster struck when the HFRL was suspended from the Rugby League European Federation due to financial problems and what the RLEF deemed “wilfully acting in a manner prejudicial to the interests of the RLEF and international rugby league.”

Stilianos uses the mantra “what doesn’t kill you makes you stronger” when describing the events of that time, but does believe that it slowed their progress: “There is no doubt that our momentum was severely halted as a result and it took us a few years to regain it and get things back on track.”

Barred from playing matches in their own country

One of the many barriers that the sport has had to face, is not being able to play in their own country; the Greek authorities do not recognise rugby league as a sport, meaning they were outlawed from playing matches, or even training.

And when training or matches did happen, it was done in the middle of the night in remote locations, with the police turning up and imposing hefty fines. This has meant on occasion they must travel to the UK in order to see themselves improve.

There have been developments since Greece’s qualification to next year’s World Cup, Stilianos gave an update on how things are progressing with the authorities.

“We have had some productive meetings with the ministry of sport this year and so far they have been very co-operative.  Our ultimate goal is to gain government recognition and an independent rugby league federation set up, so that we will never have these sorts of problems again.”

Getting to Rugby League World Cup 2021

In 2017, the RLEF recognised the Greek Rugby League Association as the main governing body in Greece. As such, they gained observer status before moving up to affiliate status in 2018. They were thus allowed to enter into qualifying for the World Cup after major revamps to their governing body, the domestic competition structure with the support of the Greek Australian community.

Greece won the match 56-26, and for the final round of World Cup qualifiers they were drawn into Pool B alongside Scotland and Serbia, the top two qualifying for the tournament. They lost to Scotland but eight days later beat Serbia in Belgrade by 76 points to qualify for the Rugby League World Cup, where they were then drawn in the same group as hosts England. Stilianos describes the experience of playing the host nation at Bramall Lane in Sheffield next November as  “a great thrill” and “a once in a lifetime for all the players and staff.”

After their success in qualifying, Greece were scheduled to participate in European Championship B alongside Serbia and Russia. Winning those two matches would guarantee promotion to the European Championship, and a chance to play sides like Scotland, Wales and France.

But like so many sporting events across the globe, Covid-19 has meant the postponement of the tournament to 2021 but Stilianos still sees this as a great opportunity to get promotion: “I am quietly confident we can do it.

“In the B division, we are allowed a maximum of 7 heritage players in our matchday 17. It will be a competitive group and I know Serbia and Russia will be keen to win it as well. Moving up to the A division would be a great boost for us and a great opportunity to play against the best teams in Europe more regularly.”

Greece are currently ranked 11th in the world but according to Stilianos “rankings do not really mean much at all.”

Looking towards the future for the sport, Stilianos is hopeful that the sport will grow even more after next year.

“As for the future of rugby league in Greece, my hope is that it will start to become a more mainstream sport in the future”.

“We just need to ensure that we keep growing as we have been.  That the number of players and teams continues to increase each year, and that once someone is finished as a player, we find ways to keep him or her involved in the sport.  There is always a need for coaches, referees, administrators and volunteers in general.”

Irrespective of what happens next year, the story of how the Greek national team, outlawed by its own government, made it to a World Cup will go down in rugby league folklore.

On Saturday, @lionsofficial will play Japan at Murrayfield. @McDevitMyles speaks to @ScottHastings13 about Scottish representation in the Lions squad in 2021. https://sportsgazette.co.uk/scott-hastings-on-the-lions-what-its-given-scottish-rugby-is-a-huge-boost/

With @thehundred set to make its debut in a months time, @McDevitMyles explores how the competition can be successful within its first season. https://sportsgazette.co.uk/how-successful-will-the-hundred-be/

Sports Gazette Rugby Editor, @bidwell_alex, looks at how @CommunityGroup5 and @RichmondFC1861 are tackling rugby's class imbalance. He discussed their efforts with @DomPalacio, Richmond's Head of Community, and a Community Group employee. https://sportsgazette.co.uk/community-group-richmond-rfc-tackling-rugbys-class-issue/

Leading voices on three of the world's greatest football rivalries spoke to @CharlieWGordon about how theirs stacks up in global terms. https://sportsgazette.co.uk/football-rivalry-scotland-south-africa-spain/