Knees up, side steps, quick sprints.

As they carry out their warm-up drills, a logo catches the eye. Black and yellow on white.

Leeds United vs Manchester United at Elland Road, a massive fixture in the Premier League. Countless eyes are on this game and the message is clear.

It’s time to kick sexism and misogyny out of football.

The catalyst for the cause

On January 30th 2021, Caz May posted a harmless Tweet poking fun at an opposing team, Wycombe Wanderers. She had friends who supported the club, and it was nothing you wouldn’t see every day from a football fan on your Twitter feed.

It started off with replies disagreeing with her opinion, a standard Twitter debate. But she’s a woman, so it was never going to end at that.

An onslaught of abuse ensued.

Caz opened up about the experience on her blog, saying she felt cornered and overwhelmed to the point of deactivating her Twitter account:

“The whole ‘tweets that precede unfortunate events’ is really funny and that’s my humour, so I don’t mind that either. Make me a meme, that’s also fine. I’ve always wanted to be meme’d. Sadly though, here they came. The body-shaming personal attacks.

“I also had a couple of direct messages from Wycombe fans – one who said I was ‘finished just like my football club’. Bit aggressive, but sure.

“The worst I saw was from a Bristol City fan who was insulting my body and more specifically my breasts whilst quoting the Rovers score. Sexism in its true form and it’s nasty.”

Like many women are forced to do, Caz brushed herself off and resumed normal life. All the time knowing that this would be happening to thousands of other women online.

The power of social media

Lucy Ford, friend of Caz and co-founder of the #HerGameToo campaign, recalled how Caz came to her a few months later and sparked an idea.

“Caz said: ‘Do you feel like there’s a campaign out there for sexism in football?’. I thought about it for a minute. And I said: ‘No, I’m not aware of one, you know’.”

“I obviously know about Rainbow Laces and Kick It Out for racism and discrimination – which is equally as important – but for sexism, I was like: ‘I don’t really think there is anything.’ Nothing that I was aware of.”

So, the women set to work, reaching out to other female football fans they knew through social media and discussing how they could raise awareness.

On FA Cup final day in May 2021, the 12 women released a video in which each of them held up a piece of paper with different sexist comments they had received. It was posted on a new Twitter profile with the name #HerGameToo.

Within 24 hours, the video had over one million views. It also received support from big names such as football journalist Alison Bender and British professional boxer Anthony Fowler.

“Even now, it’s still something that will just baffle my brain forever. Just because we didn’t know when we did it. We kind of went in with: ‘Well, this is our experience and it’ll be interesting to see the reaction.’

“We thought maybe we might get 50,000 views if we were lucky. So, to reach what we reached was just incredible. And even from that very first day we had so many people messaging us saying that this is my experience, thank you for doing this.

A small group of women had transformed the most negative aspects of social media into a positive for women in football everywhere.

One of the first things the women did after the video had circulated was set up a survey to get the experiences of others.

They received almost 400 responses. A staggering 90% of the women surveyed had seen sexist abuse towards a woman in football online and over 60% had experienced it themselves.

“We gave people an opportunity to elaborate on things that have happened to them, if they chose to. And that was really, quite harrowing. To sit there and read through some of the experiences some girls have had.

“Some of these girls have had rape threats, been pushed up against the wall – things that would make me never want to step foot back into a football ground again. It was really, really hard to read some of them. I completely understand why they wouldn’t feel football is a safe space.”

😢 398 female football fans anonymously shared their experiences with us in a survey.

Imagine if this was your mother, daughter or sister? This type of behaviour needs to end. #HerGameToo 👇🏼 pic.twitter.com/CFCEM3kvnx

So, they began approaching clubs about partnerships, advocating for reporting systems and ensuring the campaign has a presence in football stadiums.

The campaign now has a reporting system on their website where incidents of sexism at football can be raised: https://www.hergametoo.co.uk/report

What else do they do?

HerGameToo have also created their own range of merchandise, the profits of which go to charity and to the development of girls’ grassroots football.

Another important task for the campaign is ensuring that their branding is advertised in stadiums, to show young girls and women that they are welcome. Multiple clubs across the country now display the logo on their electronic boards and on their team training kits. 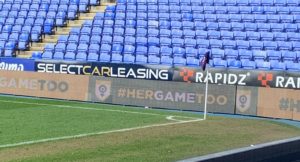 Clubs have hosted ‘double header’ HerGameToo days, where their men’s and women’s teams play back-to-back matches on the same pitch.

This weekend, Everton will celebrate becoming the first Premier League team to support the campaign at both their men’s and women’s fixtures.

Even for women who do feel safe going to matches, it seems that the struggle to be taken seriously when talking about football is a shared experience. This taboo is something HerGameToo want to stamp out across the sport.

“We want to highlight that there’s sexism in all areas of football, not just for fans. It’s for players. It’s for backroom staff. It’s for referees. It’s for pundits, for journalists, for anybody who’s involved in football, whether you’re at grassroots level or the Premier League. It’s a problem at all levels”, said Lucy.

HerGameToo have now partnered up with over 50 professional men’s teams across the UK, with more being announced daily. They also gained support from their first non-UK team, Prague Rapotors, in February 2022.

The fact they secured support from their first Premier League club in December 2021 – only seven months after the campaign was founded – is remarkable. And other top-level clubs have followed suit, including Brentford and Leeds United.

We have become the first @premierleague club to formally support #HerGameToo, which aims to raise awareness of sexist abuse within and around football.#EFC 🔵

HerGameToo want to continue establishing partnerships with clubs and ensure that the campaign holds a presence at football games of all levels.

But one of the key next steps they want to take is to get education on sexism in football into schools. Lucy believes this way, they can target attitudes towards women in children and young adults, while opinions are still being formed.

“We recognise that education is really important because you need to talk to children at a younger age and educate them that football – and other sports – is a game for girls as well as boys.

For a group of women who transformed the vicious side of social media into a virtuous movement, the possibilities are endless.