Posted on 7 December 2020 by Mitchell Marshall

Walking into a football stadium for the first time in over eight months felt like reaching out for a handshake in 2020. It’s natural in our bones, but we’ve already been reprogrammed to feel uneasy at the instinct. This week the ice had to be broken and fans proved the size of the crowd doesn’t determine the power of the experience.

Community-owned Lewes F.C. plays at The Dripping Pan, a nearly 200-year-old ground that was named number one in the book ‘British Football’s Greatest Grounds’. The pan is adorned with quirky stands named for ‘Fries and Pies’, supporters say there is nothing that compares to watching Lewes F.C. in the cozy confines of an English football paradise.

“I’ve really been feeling withdrawals from not being able to see them live,” said fan and co-owner Andy Winter. 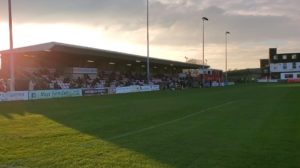 Over 300 fans were ushered in one group at a time, ready to see their affectionately nicknamed ‘Rooks’ take on Charlton Athletic in a Women’s Championship bout. They all stood distanced and obedient, so happy to be there, they were prepared to follow any instruction in the name of safety. Every ticket purchased had a request attached to not yell or sing.

That didn’t make a difference to another co-owner/supporter Ange Harris. “It’s amazing just to be allowed back inside the grounds to watch live football. I think people will be really excited and we’ll try to make as much noise as possible without taking our masks off,” she said.

The first few moments were like a scene from John Krasinski’s horror film ‘A Quiet Place’. Bubbling crowd energy suppressed from becoming a vocal expression. Every boot landing on grass echoing across the grounds. Then, like a light switch, the familiarity surmounted the circumstances and the thrill of communal emotions rising and falling with the movement of a ball felt like home. The decibels followed.

Season ticket holder Cody came to the match to celebrate his eighth birthday. When asked why he loves coming to The Dripping Pan he summed it up well: “There is a lot of noise.” 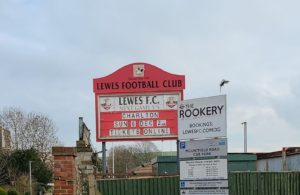 He was likely satisfied by the end of the match. In a characteristically eccentric move, Lewes asked for more noise courtesy of banging on pots and pans. After the uneasy start those clinks and clanks dominated the stands until a near miss from The Rooks attack caused a groan that couldn’t be held in.

Not long after that a goal caused a cheer that a football lover’s ears know as well as the sound of their own name. By the final 30 minutes a song had broken out and the referee was told to “Get a F****** Grip!”.

Lewes F.C. did all you could ask in the name of Covid safety. Sanitizing everything from railings to goal posts. 100% of attendees donned masks and no alcohol was sold.

Facing a tough high press the home team won 2-1 after barely holding off a furious comeback. The result was fitting for the first game back, but the outcome was secondary to the reunion with an experience fans have been craving for the better part of a year.

No denying it was different, but the smell of the grass, the sight of the sun setting behind a grandstand, and the thrill of the beautiful game couldn’t be dampened by empty seats.