Race walking is an interesting sport. Much-maligned and often cast aside as a pariah in amongst the hulking razzmatazz of track and field sport, the discipline was culled from the schedule altogether at the 2014 Commonwealth Games in Glasgow.

An official reason for race walking’s absence from the Glaswegian streets was never given. The decision appeared to have been stumbled upon – at best – murkily. Three years out from the championships, when questions were raised of the discarding, it was said that there was simply not enough time to piece together a tournament-standard course.

Four years on however, this unfashionable and idiosyncratic sport is back as 71 Commonwealth countries descend on the Gold Coast. And as Team England look to make an impression in an event regularly dominated by their Australian hosts, they do – at least – have history on their side. England’s Jo Jackson won gold at the 2010 Delhi Games – the last time that this multi-event competition featured the race walk.

All of this, though, is irrelevant to Gold Coast medal hopeful Gemma Bridge. A PhD student at Leeds Beckett University, Bridge only took up the sport last year.

“I wanted to try something different,” she explains, chuckling at how quickly her athletics career has shifted from long-distance running to representing her country in an entirely different race.

“It was definitely a dream goal to compete for Great Britain but it wasn’t necessarily a realistic goal. But then last year, when I switched to race walking, I was like: ‘Wait, I could actually be quite good at this’. It’s a bit weird!”

She readily admits that having spent a year in the United States at McNeese University as a runner, she held the same misconceptions of the race walk as many other outsiders.

“It’s viewed and regarded as a slightly older person sport,” she confesses. “It’s a bit of an odd sport, I think. But having come into it as an outsider and now having got involved, I definitely have a new view of it and it would be good to encourage other runners to give it a go. It could be a sport for many people, but they just don’t want to try it.

“For me, it’s just a different event. It’s still part of athletics but just a different discipline – like the long jump and triple jump. My mindset has definitely changed since getting involved.”

The lazy view of the event is to suggest that those who walk only do so because it is easier than running. Yet, Bridge’s route into the sport defies this flawed theory. A runner first and foremost, the stringency of the sport’s laws has forced her to work harder than ever before.

Judges are placed along the route of the race. Their role is to disqualify anyone who, at any stage, has neither foot touching the ground or whose leg is bent before passing under one’s body. The system places extra pressure on Bridge – still a relative novice in the event. 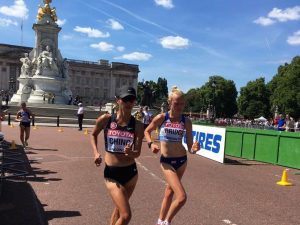 “It’s very difficult,” she says. “I think it forces you to concentrate the whole time, which is very tiring.

“Coming from not having a race walking background, it’s not second nature whereas, for a lot of other athletes who have been in the sport for their whole lives, it’s just what they do.

“For me, I’m reminding myself that it’s race walking with every step.”

The subjectivity of the judges’ eyes means that there is an element of fortune in the outcome of every race. Indeed, only five of the top 50 finishers in the women’s 20km race at the Rio Olympics were eligible for the Commonwealth Games.

In a hugely open field on the Gold Coast, Bridge knows that this gives her a chance, especially on the back of an eye-opening experience at last year’s World Athletics Championships.

“There are a lot of very good athletes at the Commonwealths but obviously it is a smaller pool than in the World Championships,” she tells me, reflecting on a 40th placed finish in London. “It’s a nicer opportunity to compete with the best but also to be properly in the mix, as opposed to at the World Championships where it was probably one competition too soon.

“As a real beginner, it was quite overwhelming. I think, given that, the Commonwealths will be a good step for me between a world stage and a national or international competition. It will definitely be a good opportunity to challenge myself.”

The challenge facing Bridge is twofold, she explains. Not only is the discipline still fairly new to her, but the mental shift from fun-runner to Commonwealth athlete remains a test.

“I didn’t come into race walking wanting to win or even to be in any championships or anything like that,” she admits.

“Competing for GB, going to the Commonwealths, going to the World Championships – you have to be very single-minded and almost selfish and obviously, doing sport for fun, I was never like that and it’s never been a natural way of being for me. Trying to be a bit selfish has been a challenge.”

With a doctorate to work towards on top of her athletics, the challenge is even greater. Bridge is following her degree in biology with research into the national sugar tax levy.

“I initially wanted to be a dietitian,” she explains. “But I felt that just being a dietitian wouldn’t have as much as an impact. So, I decided to do this research to try and help public health in general as opposed to just focusing on a small population.”

It is a noble decision and one that must place her into a tiny minority within Team GB – an elite athlete with a PhD. Yet, for the next month, it will take a backseat as she focuses her energy on an entirely different goal.