There are many unusual sports throughout the world and gurning is certainly right up there with the best of them. We spoke to Callum Scott, the chairman of the World Gurning Championships held annually in Egremont in Cumbria to find out more about it.

The etymology of the word “gurn” is a little cloudy. Some trace it back to a Scottish word which means “grin” while others think the word has a very different meaning in Northern Ireland, “to grin.” Either way, both would involve a distortion of the face.

It is also unclear when this sport began. The first Egremont Crab Fair, at which the one and only gurning championship is held once a year, occurred in 1267. Gurning may not have been going on for that long but the sport was described as an ancient tradition by one newspaper in 1852.

Gurners vying for the title of world champion converge on Cumbria from countries all over the world such as France and Australia.

The basic aim of gurning, as Callum tells me is to demonstrate facial dexterity. “It is not simply about making the most grotesque face possible,” he says, though it may appear to be that simple by glancing at some photographs of gurners in action. “It is about making the biggest transformation in your face. You could win the competition even if you were good looking to start with, it’s all about the transformation.”

When I asked him how the sport was scored and judged, Mr Scott said, “The judges look at the person’s face before and then after the gurn and judge how great the transformation is. You aren’t allowed to use any artificial aids such as plastic teeth turned upside down or any sort of accessories.”

England’s most famous gurner is Peter Jackman who, in 2000, went to the extremes of having his teeth removed in his desperation to transform his face and secure his fifth world championship. Jackman would tragically die three years later in a golfing accident.

Jackman is proof enough that gurning is no mere casual past time despite the fact that there is only one competition. Callum tells me that competing at the highest level can be very lucrative indeed and the gurners train for months beforehand.

The current champion is Ady Zivelonghi from Coventry who finally defeated multiple time winner Tommy Mattinson at the 13th attempt. He names his winning gurning face after the ‘Predator’, the creature from Arnold Schwarzenegger’s film. 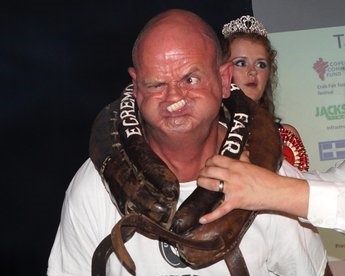 As the competition approaches its 751st anniversary this Autumn, Callum is constantly trying to spread awareness of this most unusual sport. If the Olympic Committee can consider video gaming as an Olympic sport, maybe they should visit Cumbria this September.