Posted on 8 November 2018 by Matt Davies

The movement towards gender equality in sport — consisting of equal opportunity, pay and the evaporation of existing stigma — is an ongoing process. It’s easy to state intention, but what are those in influential positions actually doing to promote this progression?

December’s PDC World Championship will, for the first time, guarantee two women a place in the tournament. A tangible milestone that marks significant progression in gender equality in sport — or so you’d think.

Linda Duffy, who reigned as the world number one female darts player from 1982-87, now lectures in Sport Psychology at Middlesex University, combining sporting experience and psychological knowledge to help players currently at the top of the game. There are few more qualified to discuss the World Championship and its implications on the progression of gender equality. Her view, however, may surprise some.

“To me, I think it’s a publicity stunt. I don’t think it’s fair to ask women to play against men,” the former world number one stated.

Duffy believes there are innate physiological differences between men and women that ultimately place a limit on the level that female players can compete with the men.

“There’s not really any skill involved that you would think a man would have over a woman. But if you look at gender differences in throwing ability, looking at all different types of throwing across all different age groups, men always out-perform women. Always. On every task.”

Duffy reaches this conclusion not based on opinion, but the empirical evidence she has gathered after researching gender differences in throwing for over 20 years. It was, in fact, this distinct difference in ability between the genders that initially raised her interest in psychology.

“I used to play mixed pairs with Eric Bristow, with all the top players of the day in the 1980s and 90s. I was the best woman for about five years, but I wasn’t anywhere near as good as them.

“I could beat them, but they were much better players than me. I used to think all the women were more or less the same standard. They were really good players, but the men were still better. I was really interested in this while I was playing. Why, when you look at someone throwing a bit of metal at a wall, can’t women be as good as men?” 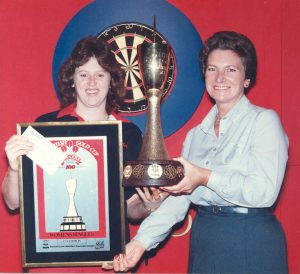 There are numerous areas within psychology that offer conflicting results from different psychologists, generally due to conflicting beliefs or the introduction of new information. Duffy describes her findings as some of the most robust you can have in sport psychology.

“Differences between the genders tend to level themselves out as people age. For example, girls may be better at recognising colours than boys. But when they get through to age seven, eight, nine, that difference evaporates. With throwing, the difference has never gone away.”

Studies on gender differences in throwing are nothing new. Psychologists Jerry Thomas and Karen French, in the 1980s, found biological differences between the genders impacted throwing abilities. Duffy stated that replicating their studies 30 years on would show more or less the same.

“We change and evolve, so we can’t say this difference will never change. But we certainly can’t say it’s changed since we’ve been researching psychology.

“The magnitude of the differences has not reduced either. We can’t even say there are trends to say women are getting closer to men. There are lots of things that women out-perform men and men out-perform women. They haven’t really shown any signs of changing.”

The distinct difference in ability between the genders stated by Duffy becomes problematic when only two female players are guaranteed a place in December’s World Championship. Even more so when the places will be determined through qualifiers.

Two qualifiers will be held to determine which woman will be granted a place in the tournament. These will be held in Milton Keynes and Dusseldorf — on November 17th and 25th respectively — and they’re open to any darts player over the age of 16.

Duffy believes qualifications, rather than a ranking system, will hinder women’s chances to compete even further.

“That’s why I’ve said it’s a bit of a publicity stunt, to do something different. For Barry Hearn to be able to say this is what I’ve done for women’s darts. That’s my opinion anyway.”

A structural change is what Duffy believes is needed to provide female players with equal opportunity and pay, rather than simply guaranteeing two women a place in the World Championship.

“There are hundreds of thousands of women that play worldwide. What women are lacking is a decent structure. In cricket, women have their own teams within the ECB. Women broke away in Tennis — that’s what darts needs. A structure for women.”

For the biggest tournament of this year, £12,000 is nothing substantial, especially given the lack of match opportunity throughout the year. The prizes are so low, Duffy believes it is now not viable for a lot of women to play the game professionally.

Increasing the opportunity for women, both financially and in terms of game time, should therefore be the goal. Duffy recognises the financial requirements needed to do so but believes it’s very achievable.

“If someone could provide £500,000 and structure a ladies pro tour the way the PDC have a men’s pro tour, I think you would see a lot of improvement in the women’s game.”

Crucially, Duffy believes the game has regressed in terms of financial equality. The progression of the game as a whole is astronomical, but the disparity in pay has arguably increased.

“When I played there were at least a dozen women who earned their living playing darts. I don’t think there are now. There aren’t enough events for them to go to. When I won the British open in 1980, the first prize was £1000. When you look at all these opens around the world that the BDO run for women, I think the prize is much less than that.

“The men’s game has really gone ahead leaps and bounds under the PDC, to something unrecognisable to the sport 20 years ago. It hasn’t dragged the women’s game with it though, let’s put it that way.”

December’s World Championship will certainty provide an opportunity to raise the profile of the women’s game. Whether or not it will benefit from the exposure remains to be seen. One certainty, though, is that there is a long way to go before there is total equality in darts.

Ahead of the London Football Awards next month, reporters @CallumRSport and @halfish95 took a look at the nominees and those they thought deserved to win the awards. @TheLFAOfficial