Posted on 10 December 2020 by Jonathan Smith

For the past eleven years, Danish football coach Johnni Nielsen has made it his mission to share his passion for football some 5,000 miles away from home on the island of Taiwan. 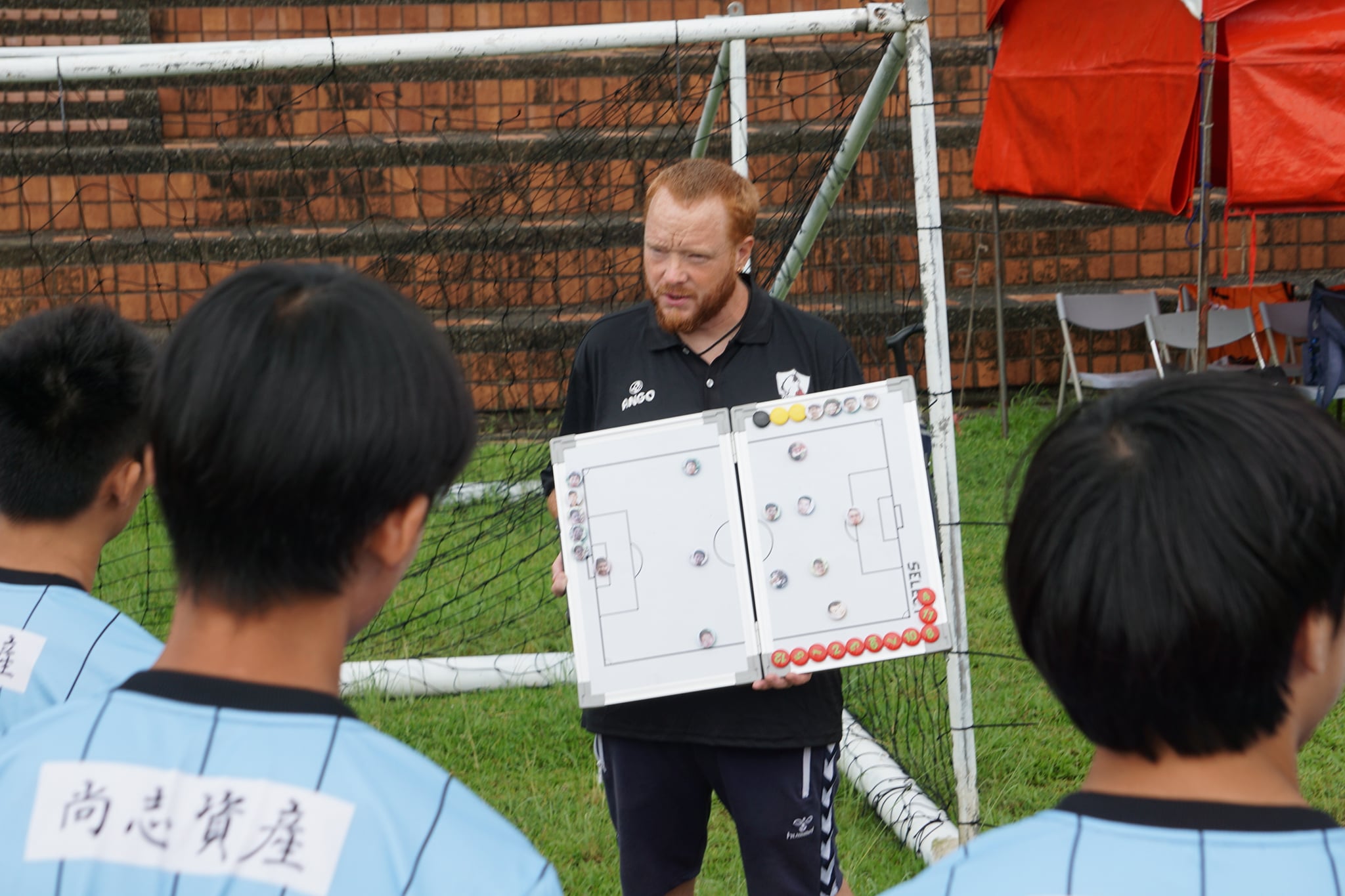 Nielsen discusses tactics with his older playersNielsen is the founder and head coach of FC Vikings, a non-profit youth football team based in Taiwan’s capital, Taipei. He is an experienced coach; the Dane holds a UEFA B Licence and was the under-18s and under-21s coach at Danish second division side Slagelse Boldklub & Idrætsforening before moving to Taiwan with his family in 2009 for his daughter’s healthcare.

F.C. Vikings was born out of Nielsen’s frustrations at not being able to find a club for his then six-year-old son, Sebastian. One of the issues for him was that he perceived youth football clubs and school teams in Taiwan to be too old-fashioned, with too much focus on intense fitness training.

“Coaches here are not that creative,” he explains. “What they will [sometimes] do is they will get the kids to run [up] mountains which I don’t think is very useful for small kids.”

However, the bigger issue was the focus on winning above all else: “School tournaments decide the budget for the school so the more the school is winning, the [greater] the budget. So number one in Taiwan will get the highest budget, that’s all the way down, under-8s, under-10s, under 12s.”

Nielsen believes that this creates a scenario where school coaches, fearing for their job security, prioritise size over technique: “They push their kids extremely hard [to] go to the gym to be bigger and stronger, because the bigger and stronger the kids are, the bigger the chance they have of winning when they are only 10 years old.”

Taiwan’s Ministry of Education has not yet responded to a request for clarification of this claim.

Feeling that this would be detrimental to Sebastian’s footballing education, Nielsen decided to take matters into his own hands: “I would just bring him to the local park and play with him myself and show him some small tricks.

“More and more kids came and joined us. Either they couldn’t afford to play football or they just had a passion for football and then in the end we had enough [to start] a football team.”

And that’s just what they did. After one year in Taiwan, Nielsen founded FC Vikings, with the intention of fostering a love for the game amongst his young players.

“We try very hard to just make it fun, make them want to continue playing football when they get older [and] hopefully feed their passion for football,” Nielsen says.

Nielsen’s more holistic approach has been successful. FC Vikings are now the official academy for Taiwan Premier League side Tatung FC, winners of the league for the last three years consecutively, and last year five of their players signed with Tatung’s first team.

Nielsen attributes this success in part to the passion of his players and in part to a switch in focus once his players have matured and found their love for the game.

“Once they get to junior high school, we train to win,” he says. “The ones who show more eagerness, more aggression, more hunger, they are the ones Tatung is interested in.”

Accessible football has been one of Nielsen’s primary motivations. In Taiwan, where the national minimum wage is NT$150 (£4.03) per hour, many youth football teams are marketed towards Taiwan’s growing middle class, with some coaching sessions costing as much as NT$780 [£20.96] per hour.

F.C. Vikings relies on sponsorships and contributions from the families of his more affluent players in order to provide opportunities for players from less-privileged backgrounds.

“Myself and mainly Hope [Nielsen’s wife] have been lucky to find a couple of good sponsorships [such as duty-free retailer] Everrich and now we are trying to get Volkswagen. So we can hopefully make it free for everybody, that’s the goal we had from the beginning, that football is for everybody.”

Working on not just their footballing skills but on their education too has always been at the centre of how F.C. Vikings operates. Training sessions are conducted in English.

This focus on English will also prepare them for their careers outside of football, especially given the short careers of even those who do make it.

Nielsen moved to Taiwan with Hope in 2009 in order to seek treatment for his daughter Semine, who has Down syndrome.

Semine is now 14 years old, and Nielsen has been able to combine his own experience of coaching football and raising a child with Down syndrome to showcase how sports can improve the quality of life for children with disabilities. Nielsen has been coaching Semine’s class, too, for the last two years.

There are 12 children in Semine’s class, all of whom have disabilities, with two besides Semine having Down syndrome. Nielsen has taken the positive experiences of this team to showcase how sports can have a positive impact on children with disabilities.

“We try to show different organisations, different groups what football can do for kids, get them together, kick a ball around and have some fun,” he says.

When asked how he has the time and energy for all this work, Nielsen smiles.

“The time is hard but the energy is easy, because I see kids smiling, I see them happy and I see they start liking football more and more and that’s enough for me. But the time is the hard thing – I need to make a copy of myself!”

Although Nielsen is eager to eventually return to his native country, and Sebastian, now 17, had attracted interest from Danish clubs before the coronavirus put paid to international travel, he is reluctant to leave before he sees widespread changes in the way youth football is managed.

“I think, right now we still need as much support as possible [and until] the government is willing to change the way that they do things, then I will probably stay here.”

All pictures used with the kind permission of FC Vikings.