If you’re a golfer, you could not wish for a better birthday present than playing 36 holes on the Old Course at St. Andrews.

Jonathan Yates celebrated his 25th year doing exactly that, but it was no present, it was hard earned, and he finished tied 11th at the St. Andrews Links Trophy.

Considering Aer Lingus only located his clubs 12 hours before his first round tee off on Friday, it was a good week.

“To be honest with all that went on before the tournament my expectations were quite low, but it was good, a very enjoyable week.”

One of the top amateurs in Ireland, Yates’ story is not quite as straightforward as many of the young talents flooding the top echelons of the game.

Jonny Yates only picked up a club for the first time at age 12. At a similar age, players like Jordan Spieth, Justin Thomas and Rory McIlroy were winning relatively big tournaments.

Yates didn’t really see golf as a career option until he was 19, with rugby getting in the way until he left school.

“I got into college in Maynooth for a year and kind of got bitten by it, I saw who was doing well around me and knew I could be as good as them,” he explained.

Since then a breakthrough year in 2016 was capped by winning the West of Ireland Championship and this year his consistent play earned him his first Irish cap. 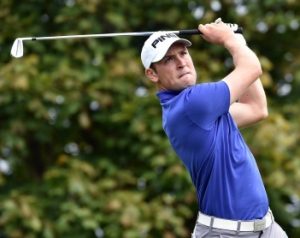 He puts a lot down to his coach in Naas Gavin Lunny:

“It kind of just clicked when I was 21 going on 22  in late 2015, early 2016 it just kind of clicked with my coach that I needed better structure and we put something down and we have gotten stronger from there.”

Of those guys around his age, Paul Dunne has made the big leap to European Tour winner, while Gavin Moynihan has earned his main tour card, while clubmate Connor O’Rourke is getting starts on the challenge tour.

He looks to work off the experience of some of those players, saying: “No offence to Paul (Dunne) he’s very solid absolutely but like Gavin (Moynihan) and Cormac (Sharvin) they were coming off huge years in the final year of amateur golf, and they have a huge amount of game.

“Paul has shown just how mentally strong he is, I really think if you can get yourself mentally in the right place you can break down a lot of obstacles people struggle with.”

Golf is an incredibly mental game, and something Yates has looked to address.

He said: “I would go to a tournament expecting to do well because I’ve done well before and things might be going well, but suddenly I’m getting ahead of myself and putting pressure on myself and I’ve fallen away.

At the suggestion of his girlfriend, he paid a visit to Enda McNulty at the start of this year, who is credited with helping the mental approach of numerous Irish athletes and teams.

Brian O’Driscoll and Paul O’Connell just two who have sung his praises in the past.

Yates explained: “I just really learnt one of the biggest walls that sports people face is their own expectation.

“If you can just focus on what you can control, like its all clichés, I know each week when I finish I’m going look at where I stand and where the winner is and what cost me those shots.

“Say in Denmark I finished 7 shots behind the leader and in the first round and the last round my short game was absolutely awful.

“Straight away I knew I just didn’t chip the ball close enough to the hole and put too much pressure on my putting so you can just go back and work on that.

“A couple of years I would have been looking at such a big picture.”

It is those supposed clichés you hear more and more from sports people. It’s not about the result, it’s about the process, most of the time you feel people are just dodging the question.

You get the feeling from Yates he really believes it, and is making a big difference to his game.

That trip to Denmark was his first professional event on the ECCO tour, a top 25 finish and a second round 65 show his ability to compete at that level and beyond.

His voice rings with pride when he talks about representing Ireland and he is still unclear on his own professional plans, but you can tell the amateur formats can sometimes frustrate him.

“This year in the west I actually won the stroke play qualifying and then got knocked out in the first round of the match play,” he starts.

“I got beaten by an Irish U18 kid I didn’t know who he was, a very good player as it turns out, but there is just so much uncertainty.

“You can play like God for two rounds and then go out and play decent, play fine, and get whooped.”

Amateur golf in the UK and Ireland bears almost no resemblance to the professional one. You go from links course and match play on an almost weekly basis to rarely, if ever, seeing either.

It’s obvious the professional game excites Yates, a great ball striker, he admits he prefers the “fairer” set up of a parkland course.

For now, he is not getting too far ahead, and the Amateur Championship in Aberdeen is his big focus, starting on Monday.

He says: “If I can just make the cut anything can happen, anyone who makes the cut for the matchplay has a chance, that’s the quality of the field.”

Interestingly one of his playing partners for the first two rounds is Tianlang Guan. The Chinese golfer made history in 2013 when he qualified for The Masters as a 14-year-old.

But it won’t concern Yates who, in his words, is playing great golf and is full of confidence.

A good week in Aberdeen could propel him to the top deck of the amateur game, but that is certainly not the limit of his ambition.