It has not been the start to the new Formula One season that either Lewis Hamilton or Mercedes were hoping for.

The seven-time world champion has been struggling, finishing outside of the points at the Emilia Romagna Grand Prix and failing to get out of Q1 for the first time since 2009 in Jeddah.

For a man used to finishing on the podium, he has found it a rarity this season. His sole podium finish was also fortunate, with both Max Verstappen and Sergio Perez retiring in Bahrain due to engine troubles.

Unsurprisingly, Hamilton is unhappy with this season’s car. After qualifying in Melbourne, he compared it to a “rattlesnake.” And after finishing outside of the points at the Emilia Romagna Grand Prix he simply said, “It just shows how wrong we got it.”

But just how wrong have Mercedes got it? Is there a wider issue with their power unit? And with George Russell performing more consistently in the same car, how much blame can we attribute to the car and how much blame resides with the driver?

The two standout drivers so far this season have been Red Bull’s Max Verstappen and Ferrari’s Charles Leclerc. The duo have treated us to thrilling races, particularly in Jeddah where the battle for first place went to the final lap.

They look set to fight each other for the title this year. And Hamilton will find it impossible to challenge them based on his current times.

To show just how slow his race pace is compared to last year when he was challenging for the title, we need to look at the fastest lap times set in Grand Prixs in 2021 and 2022.

This includes the races in Bahrain, Jeddah, and at the Emilia Romagna circuit. No data is available for Melbourne or Miami in 2021. 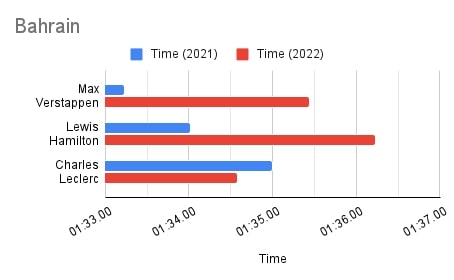 It was a similar story in Jeddah and at the Emilia Romagna Grand Prix where he was much slower than both Verstappen and Leclerc again, as well as the fastest lap times he set in 2021. 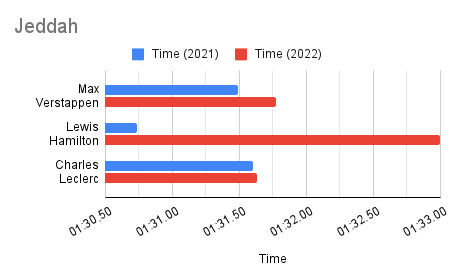 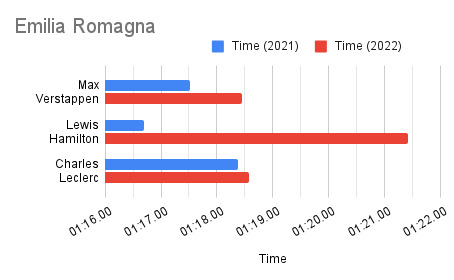 It’s interesting to see that for the most part, all three drivers are slower this year compared to the lap times they set in 2021. But apart from Verstappen’s loss of time in Bahrain, Hamilton is losing much more time than the other two.

This means on average, Hamilton has been 3.064 seconds slower this year compared to last.

The route of these problems is mainly Mercedes’ issues with porpoising, the aerodynamic effect which is causing F1 cars to bounce up and down at high speeds.

Russell described to ESPN what effect the porpoising is having on him during a race:

“I don’t have the confidence to attack with the bouncing – it’s such a unique feeling from within the car, and when the car’s going up and down, and up and down, you cannot throw it into these high-speed corners. So it’s tricky to find the right compromise.”

So by solving the porpoising effect, Mercedes will be able to mount a title challenge?

Potentially not. Because although porpoising is limiting both Hamilton’s and Russell’s ability to drive at the highest speeds, it is concerning to see that all cars using Mercedes power units seem to have experienced a drop in performance this year.

Unfortunately we cannot look at all drivers that use Mercedes power units. Sebastian Vettel missed the first two races this season, so there is no data available for him at Bahrain and Jeddah in 2022.

And although Williams also use a Mercedes power unit, Alex Albon is new to the team so there is no data available for him in 2021, while Nicholas Latifi failed to complete a lap at the Emilia Romagna Grand Prix in 2021.

Measuring the average speed at tracks each year gives an indication of overall engine performance. And for the most part, there have been significant drops. In Bahrain, the average speed lost of all four drivers was 5.005 KPH. 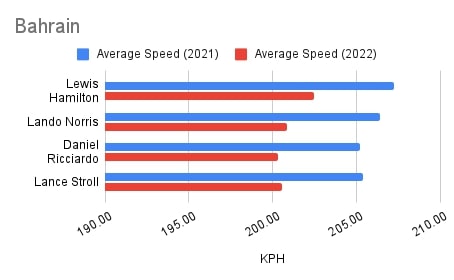 A similar pattern can be seen in Jeddah… 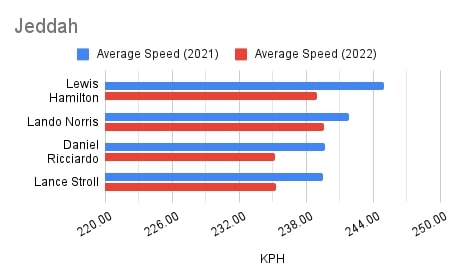 And also at the Emilia Romagna race, where Hamilton was over 13 KPH slower on average. 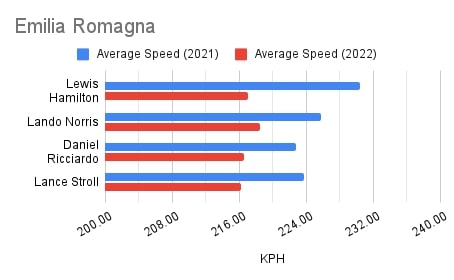 Bar Norris’ performance in Jeddah, all cars have been significantly slower than they were last year.

Compare this to Verstappen and Leclerc. Verstappen lost a significant chunk of speed at Bahrain, but only a small amount at the two other races. 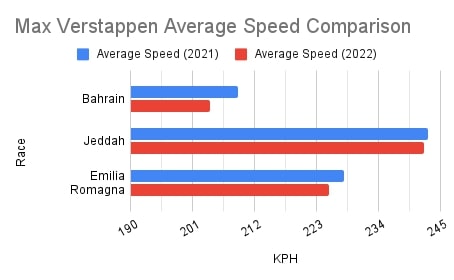 Meanwhile Leclerc gained speed in Bahrain, and lost less than one mile per hour at the other two. 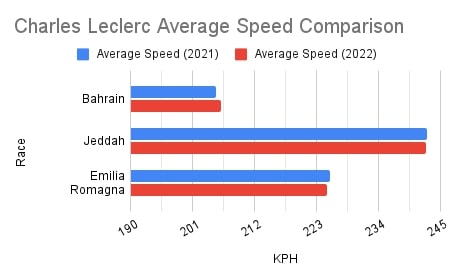 Russell has attributed this to porpoising, which is stopping Mercedes from hitting top speeds. “If we solve the porpoising,” he says, “that would cure I would say 99% of our issues.”

Just how big a gap there is between Ferrari, Red Bull and Mercedes power units will only be known once Mercedes have addressed the porpoising. But the universal and significant drop in pace for Mercedes powered cars is not a good sign.

The most damning comparison to make for Hamilton this year though is his performance alongside Russell’s.

Despite driving the same car, Russell has managed to perform more consistently. He has not yet finished outside the top five this year.

But despite the huge variance in results, there is not a huge difference in lap times between the two. 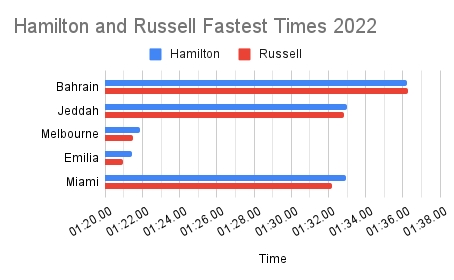 The times do not show a huge gap in performance between the two cars. Yet Russell has managed to get better results on a more consistent basis.

This reflects just how talented a driver Russell is. But it also shows that Hamilton may not be performing as well as he could be. He should be competing with Russell further up the grid more regularly.

Mercedes may not currently have the same race pace as Red Bull or Ferrari. But with Russell finding a way to get results in the same car, Hamilton’s performance is also partly to blame for disappointing results this season.

Signs Of Improvement In Miami

Last weekend’s result in Miami was promising for Mercedes, with Russell finishing fifth and Hamilton sixth.

What was even more encouraging was the lack of porpoising over the weekend. The only time it looked bad was in the third practice session when the ride height of the car was lowered to try and find more speed.

But despite being the third best car that day, neither Hamilton nor Russell were particularly happy.

Both drivers know Mercedes should be competing for race wins. And for that to happen, significant changes have to be made.

“I think it is mixed feelings to be honest because based on where we were yesterday it is a good result,” Russell said while speaking to Sky Sports.

“But if you had told me after Friday we would finish P5 and P6 that far behind P1 I would have been disappointed so we have a fast race car in there we just don’t have the key to unlock the performance.”

Hamilton was blunter about the result:

“I’m excited at some stage to take a step forward, which we haven’t yet.”

Both drivers can see the car has potential. But everyone in the Mercedes garage recognises that a lot of work needs to be done this season to find it.

All data was taken from the F1 Official Website.

To read about the new changes to F1 this season, click here.

To read more work by the author click here.