An early kickoff game at Watford back in August 2017 was the first time that Mohamed Salah, Sadio Mane and Roberto Firmino played together in the Premier League. It was also the first of eight games in that season where the three of them scored at least one goal each.

It is undeniable that Liverpool’s success in recent years has been partially thanks to the speed, chemistry and goal scoring ability of their front three.

Salah’s 32 goals made him the Premier League’s top striker in the 2017/18 campaign despite Liverpool finishing fourth; last season, Mane and Salah were two of the top three Premier League strikers in a triple tie with Aubameyang at 22 goals each.

This season, Mohamed Salah is Liverpool’s top striker with 14 goals, and is tied as the fifth EPL top striker with Marcus Rashford. With 16 different goal scorers in the Premier League so far, Liverpool is the team with the highest amount of different players that have scored at least one goal (Leicester City is second with 14 and Chelsea third with 13). 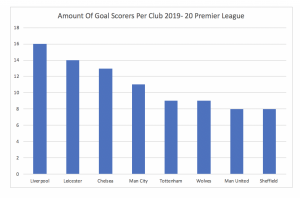 There has been a slow but gradual reduction of Liverpool’s goal scoring dependence on their top three and to better illustrate this pattern we have to go back to the first season Mane, Salah and Firmino played together.

57 out of the 84 goals Liverpool scored in the 2017- 2018 Premier League campaign were sent to the net by Mane, Salah or Firmino. That same season the front trio scored 32 out of the 47 goals in the Champions League campaign- including both playoff qualifier games against Hoffenheim for a group stage ticket- which ended with a loss in the final against Real Madrid. The front three accrued for 67,9% (89 out of 131) of Liverpool’s total goal scoring in the two major tournaments (Champions League and Premier League) of the 2017/18 season. 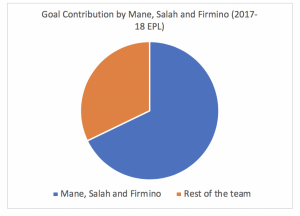 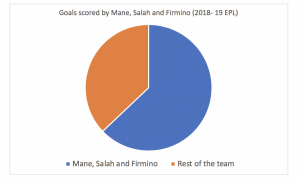 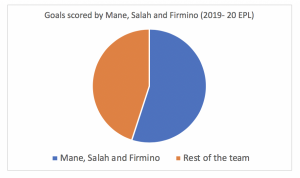 Liverpool’s tale in their Champions League winning season is a symbolic demonstration on how Klopp has managed to reduce the goal scoring dependence in on his starting front three. Before the semi final against Barcelona, 12 out of Liverpool’s 18 UCL goals (66,7%) had been scored by Mane, Salah or Firmino. Out of Liverpool’s six goals in the semi finals and final, only one of them was scored by a starting front three as Salah’s penalty found the back of the net against Tottenham at the final in Madrid. Three of the five remaining goals were scored by Divock Origi (two against Barcelona and one against Tottenham) and two by Georgino Wijnaldum (both against Barcelona).

Klopp broadened his goal scoring reliance amongst the squad. Up to 16 different Liverpool players have scored in the Premier League this season. No other EPL team has so many different goal scorers in their squad.

The tactics implemented by Klopp involve opening up the play in the wings with his right and left backs; Trent Alexander-Arnold and Andy Robertson respectively. Alexander-Arnold’s crosses from the right especially have turned out vital as he leads Liverpool’s assists tally with 10 Premier League assists so far; he is also the second top assist man in the league only behind Kevin De Bruyne (15). Robertson has sent six passes for goal in the Premier League so far this season. 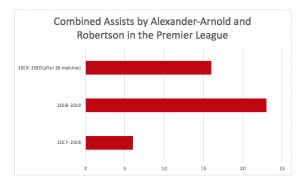 Liverpool’s reliance on Alexander-Arnold and Robertson has been a work in the process that has give it’s fruits in the last two seasons. Robertson provided five EPL assists in 2017/18 and TAA one. Six in total, they both summed up the assists Robertson has provided this season so far. Last year was their breakthrough year as they were the first and second top assisters for Liverpool in the Premier League; TAA with 12 assists and Robertson with 11.

Liverpool’s direct play, their fast transitions, explosion on the wings, as well as their defensive strength are key for their success. A record of 76 out of 78 possible points. The club from Merseyside will finally break a 30-year drought without becoming English champions.

The @FHC_WNT was on the doorstep of qualifying for Tokyo 2020. A penalty shootout with Ireland later, the lights on that dream were suddenly turned off.
>>>Follow the thread.

Curious to know which is the most hashtagged stadium in the UK?
🔺🔺 Cue: It’s not Old Trafford.
Sports Gazette reporter @KiranTom crunches the numbers.

Our reporter @Laoishee looks ahead to the races this afternoon and picks out her favourites! 🐎🐎🐎

Our very own @BChap12 gives his take on why the Premier League needs their very own All Star Weekend. Heung Min Son, Sergio Aguero, and Mohamed Salah all in the same front three? We can dream. Premier League lets make it happen!