Posted on 30 November 2020 by Nathan Frazer-Carroll 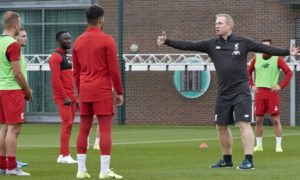 Thomas Grønnemark certainly raised eyebrows when he was appointed as Liverpool’s throw-in coach in 2018. He has since worked with a host of European clubs, three of which feature in this years’ Champions League Group D – Midtjylland, Ajax and Liverpool. The former Guinness World Record holder insists he can change the football world.

“For so many years it’s been just a throw-in, deemed inconsequential,” he says. But Grønnemark’s Long, Fast and Clever throw-in philosophy is about more than just marginal gains.

“There are between 40 and 60 throw-ins in any game of football and teams usually only retain possession on 50% of occasions. If you had the same percentages with your feet you’d be playing Sunday league football.”

Despite how alien the concept may sound to some, coaching throw-ins seems completely logical when you read those statistics. The thing that seems strange now is that this innovation hasn’t happened sooner.

While his work in Denmark earned him attention domestically, Grønnemark remained relatively unknown to the world.

It wasn’t until the German publication Sport Bild circulated a piece about his work with Borussia Mönchengladbach left-back Andreas Poulsen that he was noticed and subsequently contacted by Liverpool manager Jurgen Klopp – a moment the Dane describes as “totally crazy.” 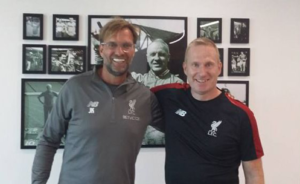 Grønnemark began working with Liverpool in 2017-18. There were specific improvements that Klopp had in mind for the team and the Dane was keen to contribute.

“Before I came to Liverpool, they were 18th in the Premier League for ball retention from throw-in situations with 45.4%. In my first season we improved to 68.4% and now we’re number one,” said Grønnemark.

Grønnemark has not only aided the team’s ball retention, but has contributed to chance creation too. 14 of Liverpool’s 85 goals came from throw-in situations, which is less startling than it sounds given how many of Liverpool’s chances come from wide areas.

The coach has the unique pleasure of watching three teams he has worked with – Liverpool, Ajax and Midtjylland – face off in the same Champions League group. He has already had a tangible impact on the group  –Liverpool’s winning goal in their 1-0 home win against Ajax came from a throw-in.

Gronnemark hails the Liverpool full-back pair Andrew Robertson and Trent Alexander-Arnold as the best throwers of the ball in world football, though he is self-aware enough to note his own subjectivity in the matter.

“Robbo and Trent are really good at throwing to feet for example. There are loads of throws in the 10-15 meter range where fullbacks are throwing to the head or the chest; that’s one of the main causes of possession loss.”

Grønnemark stresses that for a great thrower, patience is sometimes as important as speed: “Sometimes it’s really good to throw the ball fast because the opponents are not organised, and sometimes it’s the worst thing you can do.

“If you throw the ball fast into a pressure zone, you have a really high risk of losing it.”

In his role as FIFA’s Chief of Global Football Development, Arsène Wenger thrust throw-ins into the spotlight in October 2020, stating that they should be replaced with kick-ins.

Grønnemark, unsurprisingly, disagrees, highlighting the unique tactical requirements of defending and attacking throw-ins: “If you have a kick in, you won’t have so many pressured situations. It would be something like having 60 short-corners all over the pitch in a match – you will end up having a lot of no pressure situations.

“In many ways you are in a similar situation when you take a throw-in. By replacing throw-ins with kick-ins you’ll be missing out on that type of opportunity.”

While Grønnemark continues to impact the top level, he can often be found working with second and third division clubs in a host of countries. This approach speaks to Grønnemark’s vision: “[I want to change] football so we have much better throw-ins, not only in pro football, but in youth and amateur football as well.”

Looking to the future, the Dane has his sights set on a book release outlining the Long, Fast, Clever methodology: “The only way I can change the football world is by travelling to conferences, speaking to big crowds and publishing my book – although I worked with eight clubs last season, there are something like 500,000 or a million out there who all want to be better.”

Grønnemark’s work with teams like Liverpool and Ajax has finally legitimised the notion of coaching throw-ins. We can only expect to see more of his influence taking hold in years to come.

If you insist on not being Frank Lampard, you really only have yourself to blame I guess.

What’s it like to be a sports commentator without the energy of the fans? Sports Gazette’s @Boodhernandez6 speaks to @BeinSports Middle East commentator @khellouadel on commentary, life and football in the Covid-era.
https://sportsgazette.co.uk/bein-sports-commentator-adel-khellou-on-football-and-commentary-in-the-covid-era/