Posted on 19 October 2018 by Rachael Mathewson

Paige McPherson, the Miami-based Olympian, was a tap, ballet and jazz dancer from the age of five to 18, and is now using the fluidity she learned on the dance floor to great effect in the Taekwondo ring – or dojang.

Her moves will next be put to the test this weekend when she competes against familiar opposition at the Manchester Grand Prix.

She is looking forward to competing in the United Kingdom again after winning gold in Taoyuan, Chinese Taipei in September, and silver at the President’s Cup in Las Vegas, Nevada last Sunday. With those competitions behind her, McPherson is looking for another victory at the Manchester Grand Prix this weekend.

Over the course of her training, she had competed against opponents multiple times, which makes the small mistakes in the ring even more significant. 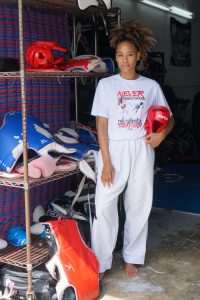 For McPherson, it’s all about mindset when entering the ring. Even though you may be familiar with someone’s fighting style, every fight is different.

Like personalities, everyone’s fighting style is slightly different, with her personal method centred around her height. McPherson stands at five foot eight inches and the natural assumption is that she’s at a disadvantage because of it. To assume that height reigns supreme, however, is a common mistake to make.

Other factors must be considered and Taekwondo isn’t necessarily about height. Rather, your ability to react to your opponent. This comes from everyone’s unique fighting style. McPherson describes her own style as “explosive” due to her ability to read her opponent and attack.

Even though she is the smallest in her weight division, her height has taught her to never underestimate anyone.

“I know that on any given day I can lose to anyone so I always treat each player that I’m up against with respect. I’m aware that I’m going to have to fight for this regardless of who they are and their ranking or their name.”

But her “explosive” nature isn’t her only advantage.

McPherson’s dance background in ballet, tap and jazz gave her a stronger awareness of her body when she first started Taekwondo. According to her, dance and Taekwondo is similar because you are always learning new moves which developed her ability to adjust to each situation in a competition.

The combination of her athleticism and unique characteristics is what she thinks makes her a well-rounded competitor.

Knowing that Tokyo 2020 is around the corner, this weekend she will focus on how to force each opponent to make mistakes instead of making them herself.