Men’s health is something we don’t speak about enough, for the last few years one company has been trying to change that by growing hair above their lip.

The Movember foundation started back in 2003 and has a very simple goal, to stop men dying to young.

From the 30 moustaches in their opening year, now over 5 million people grow out their tache in the month of November to raise money and awareness.

Cambridge Rugby club have got behind the movement in the last couple of years, this year they have 16 players involved and are on course to raise over £1600 for charity.

Second-row Rob Conquest got involved because he has seen a worrying trend of professional rugby players leaving the game and suffer with mental health problems.

He said: “They are starting breakdown with their mental health, starting to struggle.

“With this charity I thinks it’s great they are supporting them in that.”

Hooker Cameron Richardson got involved for similar reasons and sees big issues in the game he plays and loves.

“I think there is a stigma in rugby union,” he explained.

“That you don’t talk about your feelings or you hide your pain sort of thing, like when you are younger and coaches tell you to man up.”

The movember movement is now very much worldwide with sports clubs only one of the many areas of society embracing the message.

The club themselves have been using twitter to get the message out there, updating people on social media with their progress. 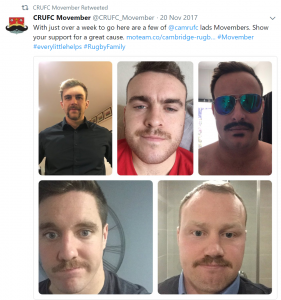 The foundation focus on five main points, make more time to talk to your male friends, get out and exercise more, when you turn 50 check your prostate, “know thy nuts” and have more open conversations about how you are feeling.

They are simple steps to improving or maintaining both physical and mental health, and clubs like Cambridge are a great example of how the message can be spread.