Posted on 15 May 2018 by Shane Murphy
With the 2018 Commonwealth Games in the rear-view mirror, it’s remarkable look back at some of the achievements made throughout the games.
The ecstasy of the games broadcasted on national television highlighted a lot of highs and even some lows for athletes whilst out in Australia’s Gold Coast.
Sam Dawkins represented Jersey at the games and competed in the Men’s 200m and 400m.
In the 200m heat, he managed to achieve a new personal best (21.91secs) which was initially thought to be a new national record for Jersey.
But with the ecstasy of achievement comes sacrifice and heartache for most athletes.
But Dawkins insists the immediate feeling you get after you’ve qualified is something very special.
“As soon as I crossed the finish line, the first thing I did was look at the clock,” he said. “I knew I had run a good race but when I saw the time I thought the clock might have been broken or stopped too early (it can happen).
“I looked over to my coach in shock, and couldn’t believe I had actually done it, as it was my last big race of the season.
“I had ran personal bests quite a few times that season but nothing quite felt as amazing as that did – I was buzzing!”
Dawkins didn’t celebrate too much however as the joy of success was quickly overshadowed by the daunting prospect of preparing for the biggest event in his career and he insisted preparing for a different climate proved to be somewhat difficult.
He said: “With the games being held in Australia, it meant the competition took place in April rather than July/ August if it was in Britain.
“The outdoor season in the UK tends to begin in May so to try and be as race fit as possible I had to have a big indoor season.
“400m indoors is very different to 400m outdoors and with it being winter in the UK, speed training was hard to do, especially in Jersey as we have no Indoor running facilities.
“Because of this I actually travelled out earlier than the rest of Team Jersey to acclimatise, take advantage of speed training in warm weather and compete in practise races before the big event!”
With so much work going into preparing for an event, it’s almost certain athletes will stick to a routine that suits them. Others may even take this a step further with pre-race rituals, as many athletes have admitted to being superstitious.
“My training partner and I used to be pretty superstitious before races,” he said. “We would race in vests we had run well in previously because they would be our ‘lucky vests’, but we have worked hard to get out of that!
“This was important because in big events you can’t always choose your vest. I can’t really speak for other athletes but I’m sure there are quite a few with some lucky pairs of underwear or something.

“I won’t race without compression calf sleeves! The day before and on the day, leading up to my race, I tend to eat the same meals and in between races. Finally I always have to follow the same warm up routine before I race.”

After qualifying and a great training camp, things managed to get even better for the 24 year old, even if it was only for a short time.

Dawkins managed to run what was initially thought to be a new 200m record for Jersey, and although he did manage to run another personal best in that race, it soon became apparent there was some confusion on whether it was in fact a record.
He said: “Unfortunately it did not end up being an Islands best.
“There was a lot of confusion because I was the first athlete to compete in the 200m for Jersey at the Commonwealth games. But that record is in fact held by ex-Olympian, Colin Campbell.
“However, running a personal best is always great, but to do it on the world stage was an extremely proud moment for me.”
As great as an experience as this was, one of the specific moments that stood out for Dawkins was the atmosphere on the track just before he raced and insisted it was something he had never experienced before.
Dawkins said: “I’ve never quite experienced an atmosphere on the track quite like the one at the Commonwealth Games.
“It gave me an absolute buzz, the crowd was so loud when the athletes were being introduced, and especially if there was an Australian athlete in the race they would go mental.
“But then as soon as the starter says on your marks its dead silent. From that point I don’t really notice because my head is too engaged in the race.” 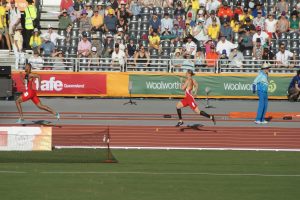 For athletes all over the world, particularly those just starting out in their careers, it can be very hard to find the strength and determination to continue and the only way to progress to a higher level of athletics is with funding.
Many athletes find it difficult to secure sponsorship or gain funding and Dawkins says his career so far has largely been down to the support of the Jersey Sport Foundation.
“The Jersey Sport Foundation have been extremely important,” he said. “They have been great for improving my general strength, but mainly assisting to get me back on track from injury and to peak performance.
“I fractured my ankle eight months before I ran the qualifying standard and the team really helped me train around it. Peter (Irving), notably spent a lot of time with me and helped me to focus on strengthening my weaknesses whilst I couldn’t run and I came out stronger than before I broke my ankle.
“The key thing at a young age is to just enjoy the sport. Even if you are not the best but you enjoy it keep going and don’t give up.
“The reason is, if you aren’t the best athlete as a youngster, it doesn’t mean you won’t be the best as an adult.
“When I was a youngster in athletics, the best athletes would compete at English schools and a lot of Jersey young athletes have taken part in the competition.
“But I never qualified for it. I have been in and out of athletics, mainly due to injuries but I have always come back because I enjoy it.
“And for a kid who never competed at English schools, I was the first Jersey track athlete in 24 years to compete at the Commonwealth games.”
Having now gained some invaluable experience at the commonwealth games, Dawkins now hopes to further his career by solely focusing on athletics.
He said: “My key focus for the last few years has been the Commonwealth Games and I worked in finance to fund my process of getting there.
“I will maintain competing in athletics, trying to build my way up the British rankings. But I would like to focus solely on my career now, which is not yet set in stone, but I will be leaving the finance industry.”
Share on Facebook Share
Share on TwitterTweet
Share on Google Plus Share
Share on Pinterest Share
Share on LinkedIn Share
Share on Digg Share
Football
Rugby Union
Cricket
Tennis
@sportsgazette