Posted on 22 October 2018 by Jack Cunningham

The Amputee World Cup starts this Saturday 27th October in San Juan de Los Lagos, Mexico and the England team travel there with a very good chance of winning and earning national fame.

The road to the World Cup has not been an easy ride, as the team have had to fund the trip themselves through sponsorship deals. The Premier League have also chipped in, helping the side reach the £70,000 needed to go to the World Cup.

The reason for this is that the FA don’t provide the England Amputee Football Association (EAFA) with any funding at elite level.

With this in mind, Owen Coyle Jr — head coach of the England team — told the Sports Gazette that the team back themselves to win the tournament. He certainly has a solid foundation to build on, having guided the team to the final of the European Championships in 2017 at the age of 21.

“We always back ourselves, we have a very talented group of players and staff as well,” Coyle said, confident about his side’s chances at this World Cup.

“So yeah, we back ourselves to go try win it. It’s like any tournament. We need the luck of the draw and things to go our way but no matter who we play our aim is to go and win any game of football. Last year we finished second at the European Championships and in my opinion, Europe is the strongest continent. So, there is no reason why we can’t go all the way.” 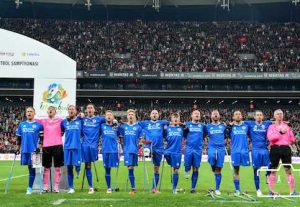 He was very honest about what is likely to be a very low public reaction from people in England, even if they do win.

“It sounds sad but even if we win the World Cup I don’t think that many people would be aware of it,” he confessed. “I am sure the media outlets like Sky Sports News and the BBC would try and raise awareness, but it would be nowhere near the level that the England team received after Russia.

“This is a real shame because any amputee in any sport who becomes a world champion should be recognised heavily for it. All we are focused on is the job at hand and if we do win the World Cup, we will cross that bridge when we come to it.”

What has not helped is the lack of funding from the FA at the elite level, meaning the sport has not had the chance to grow like some of the other disability groups in football.

“In terms of the FA or any other associations we don’t get any funding at elite level. The FA do support us at grassroots level — like all disability and impairment groups. In terms of elite level, we are one of very few groups who receive no funding from the FA. The FA do however, support the Deaf, Cerebral Palsy, Blind and Powerchair teams both at grassroots and elite level.”

Coyle continued: “Our funding comes from Simply Business, an insurance company based in London who have sponsored us for two years. They have been nothing short of sensational and have given us £30,000 to support the team, leaving us with £40,000 shortfall, which the players and staff have had to fill at £1500 per player.” 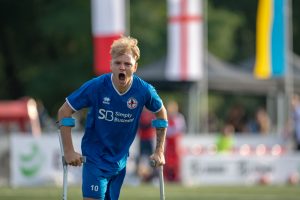 This left the team £10,000 short and, as a recent article in The Guardian stated, the Premier League stepped up to pay the rest. The FA responded by promising to improve their work with this disability group at the elite end, matching their efforts at grassroots level.

This will hopefully happen, but the fact that each player had to raise £1500 to represent their country at a World Cup is something that cannot be ignored. Despite this, Coyle maintains that the EAFA and the FA have a good working relationship:

“There is a very good relationship on many fronts and we will do our best to continue with that and keep making them aware of what we are doing. We don’t feel sorry for ourselves, we don’t complain about it, we get on with what we are doing. If we got the FA’s support however, I believe that it would take the team to the next level.

“If we became world champions this year then that would only help. Hopefully more publicity will kick the FA into action. We are in regular contact and hopefully one day we will represent the Three Lions.”

“Last year when we played Turkey in the European Championships. The game was on every channel in Turkey because it was the national team. Then we flew back to Manchester and no one knew who we were. That is the challenge we face because elite sport dominates our country.

“I don’t see that changing in the short term but if we can get as much publicity out there from as many channels as possible, then that would be great. Whether it’s through word of mouth, social media or interviews.”

England’s first game is against Uruguay on October 28th, kicking off at 11:00 GMT.