Posted on 6 March 2020 by Alexandra Ibaceta 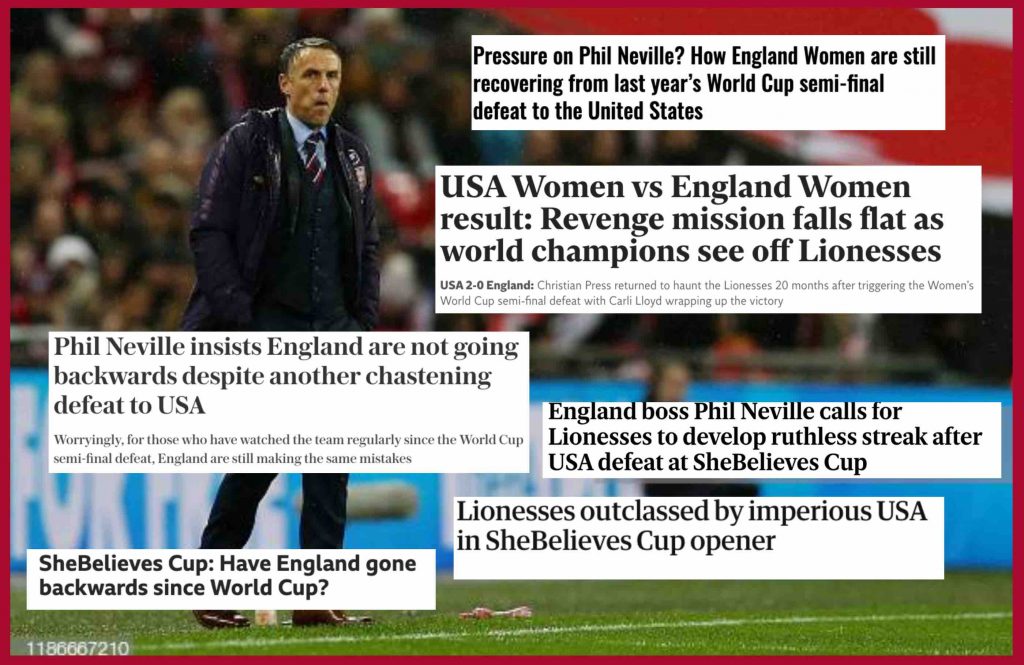 Yet another defeat for the Lionesses.

Phil Neville’s ability to manage this squad is put under more scrutiny than ever before.

Should he be in the position that he is in? Is he still there just because he is Phil Neville?

A comeback from this consistent decline seems more elusive with each painful defeat.

England’s latest 2-0 fall to the World Champions in Orlando in the SheBelievesCup was not surprising, but still disappointing.

We all expected England to have a go at revenge against the USA after the World Cup semi-final; having fallen to a typical American penalty advantage, a failed Steph Houghton penalty and an Ellen White disallowed goal.

The Lionesses are well capable of competing with an American team filled with players on their off-season.

Lianne Sanderson, ex-Lionesses, summed up this reality post-match on the BBC: “At this moment and time, he just doesn’t seem to be getting the best out of the team.

“I feel we have taken massive steps forward before but I think we have gone backwards. It looked like it could have been four or five.

“We have good enough players that are good footballers. I don’t think Phil Neville is getting the best out of them. We look scrappy and there are players on that team who I know can do better than they are.

“I don’t want to sound too negative but that just wasn’t good enough and we are good enough to compete with America.”

No messing around from Lianne Sanderson in her post-match analysis.

Sat beside her was Alex Scott, 140 appearances for England, who struggled to find positives to take out of the Lionesses’ latest defeat: “We are not in the same bracket as the USA, we are below.

“If we’re seriously talking about wanting to win gold medals, we need to up our levels in all areas.

“People judge you on results. As the months go on you need to win, you need to be showing up given all the investment going into them. You need to find a way.”

But is Phil Neville the right person to find a way?

His choice of players has been nothing but questionable since England was dumped out of the World Cup, finishing on two losses.

Bethany England has been in the form of her life this season; 21 goals in 23 matches in all competitions with Chelsea.

Phil Neville to BBC Sport: "Beth England will get opportunities in this tournament but ultimately the bar has been set really high by Ellen White over the last 12 months. There is a good blend of youth and experience in that team."

Yet, Neville choose to leave her on the bench against the best in the world, claiming White has had the better year. The Manchester City striker has just 8 goals in 16 appearances in all competitions this season.

Wouldn’t you pick a high-flying striker to lead the attack against the best in the world?

His explanation to leave England on the bench was simply unsatisfactory and inaccurate if he’s basing last night’s selection on the strikers’ forms.

And it seems to be a consistent problem on his team selections. He simply does not know how to form the best squad possible with the players he has.

It has been two years since his appointment and by now, you would expect a strong core squad with a clear style of play, but that is lacking.

Instead, England have dropped three places in FIFA’s ranking and Neville has a record of 1 win 4 draws and 5 losses against FIFA’s current top eight teams.

Look it's the first game of the year against the world champs on home soil, but I still don't know what our style is.

Another Lionesses game where I just couldn’t identify what the plan was. USA are in pre-season, but made pretty short work of England in truth.

It was another night of the women’s football world struggling to figure out what Neville is trying to do, figure out the thought process of the inconsistent lineups and figure out just what the players have been instructed to do.

A frustrating late night full because you stayed up until midnight just to watch world class players unable to find any fluidity and being incapable of playing basic football.

So how much longer can this go on for?

Neville is going under the exhausting process of picking the Team GB squad for this summer’s Olympics, but should he trusted to pick the best possible combination of 18 players after being unable to find a consistent quality combination for England?

Many journalist and fans went under the daunting task of picking 18 players from the endless selection of players, certainly harder than beating the USA.

But forget the Olympics, next year England has the Euros on home-soil, the ultimate disappointment would be putting on a poor performance in front of a home crowd simply because of inadequate management.

The chances of England going anywhere near the European trophy is at a minimum if the squad goes on as they are.

There needs to be a change. If Neville fails to get results against Spain and Japan, the FA need to bring in someone who is capable of getting the best of a squad.