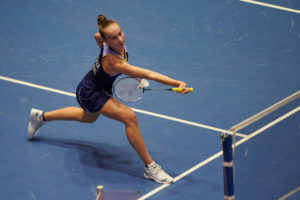 Eight months ago, Polina Buhrova had nothing to focus on but badminton.

At just 17-years-old the Ukrainian stormed to the women’s single title at the Latvia International.

A stellar career lay ahead of her. She was the poster girl for a new generation of Ukrainian women’s badminton players.

More importantly she still had the untempered innocence and enthusiasm of youth.

Now 18, and the national women’s singles champion of Ukraine, Buhrova has been forced to grow up in ways she could never have imagined when she won her first senior title last August.

Buhrova was living in Kharkiv when her country was invaded. Just 30km from the Russian border.

The city was shelled heavily on the first day of war. Devastatingly.

Buhrova and her teammates from the Kharkiv Badminton Sports Club were travelling in Dnipro. Such was the danger; they never had a chance to return.

Along with nearly six million other refugees from Ukraine, Buhrova fled the crisis attempting to find safety.

She has now settled in the Czech Republic where she is able to train and prepare for upcoming tournaments. 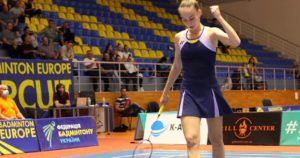 Where recently was freedom, exuberance and clearness of mind is now the burden of the destruction she sees of her country ever day. The only way to channel it is to use it as motivation to win under the flag of Ukraine.

On the day before she faced Danish number two seed Mia Bliechfedlt, Buhrova answered these questions:

How was your first day of war? How did you become aware of the Russian Invasion?

“That day, we were in Dnipro city. I mean our team that took part in the National Cup of Ukraine. I took some rest before the next day. I was sleeping when our coach entered the room in the early morning and told us: “Girls, wake up! Go to the shelter! The war has started!

“That’s a terrible feeling… I can’t even describe what you feel when you hear such words.”

Your native city, Kharkiv, has been heavily bombed since the first day of the war. What have you heard from your parents and loved ones?

“Thank God my parents and friends are safe now if there is a safe place in Ukraine. Some have moved from the city, and some stay in Kharkiv. I try to keep in touch with everyone about how far it is possible because of alarms and curfews. I pray for everyone who stays now in Ukraine and hope to see them very soon.”

Today, you have a chance to train. How was it taking the decision to leave Ukraine?

“The most difficult decision was to leave Dnipro city. We were hosted there so warmly. But, after the Russian invasion started, we had received no positive news at all. It was “hotter” every day. So, we dared to make a decision and leave the city.

“It took us a few days to get to the border. We stopped in some small towns, and with every new city, I understood that there was no certainty when we could see our loved ones. It was the most difficult part of the road to the border. It is difficult to put the pain and sadness we all felt into words.

“Now, I am in Czech Republic. People here treat us so well! We have everything we need to live and train.

“It took me some time to get back to my training. Now, I am focused and keep going toward my goals. I have even more motivation to bring gold medals to my country. That’s because our Ukrainian people, who are so amazing, I feel their support; they backup and give strength to go further!”

What is your next tournament? Can you talk more about your plans for the future?

“It is not an easy thing to create long term plans now. So, I try to focus on the upcoming 3-4 months. I’ll take part in a few tournaments in Asia.

“I would also love to win the U-19 Championship this year and bring a gold medal to Ukraine. That’s my goal.

“Also, I’ll participate in EU Championships in Madrid. The tournament will start on April 26th.” 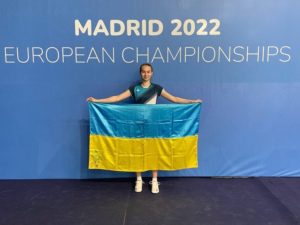 What do you think about your chances at the EU Championships? Do you think you can become the Champion?

“It would be great. At least, I hope so and I will work hard and not give up on achieving it someday.”

With such measure and calmness in her answers it is easy to forget Buhrova has gone through so much and had to adapt so dramatically at such a tender age. To maintain such focus when so much is crumbling around her is testament to her personality and character.

It is difficult to argue this is not the mentality of a champion, on and off the court, for years to come.