Football and basketball provide some of the highest prize funds in sport for men, but individual sports prove more lucrative for women.

BBC Sport recently published the updated figures for their global study into prize money in sport.

However, due to the coronavirus pandemic in 2020/21 and some competitions being men only, some data was incomplete.

The chart below compares prize money across the 10 highest paid sports.

But it only includes data from competitions available for men and women and complete data for 2019 and the latest figures.

The data in the chart is the average prize money for a major competition in that particular sport. 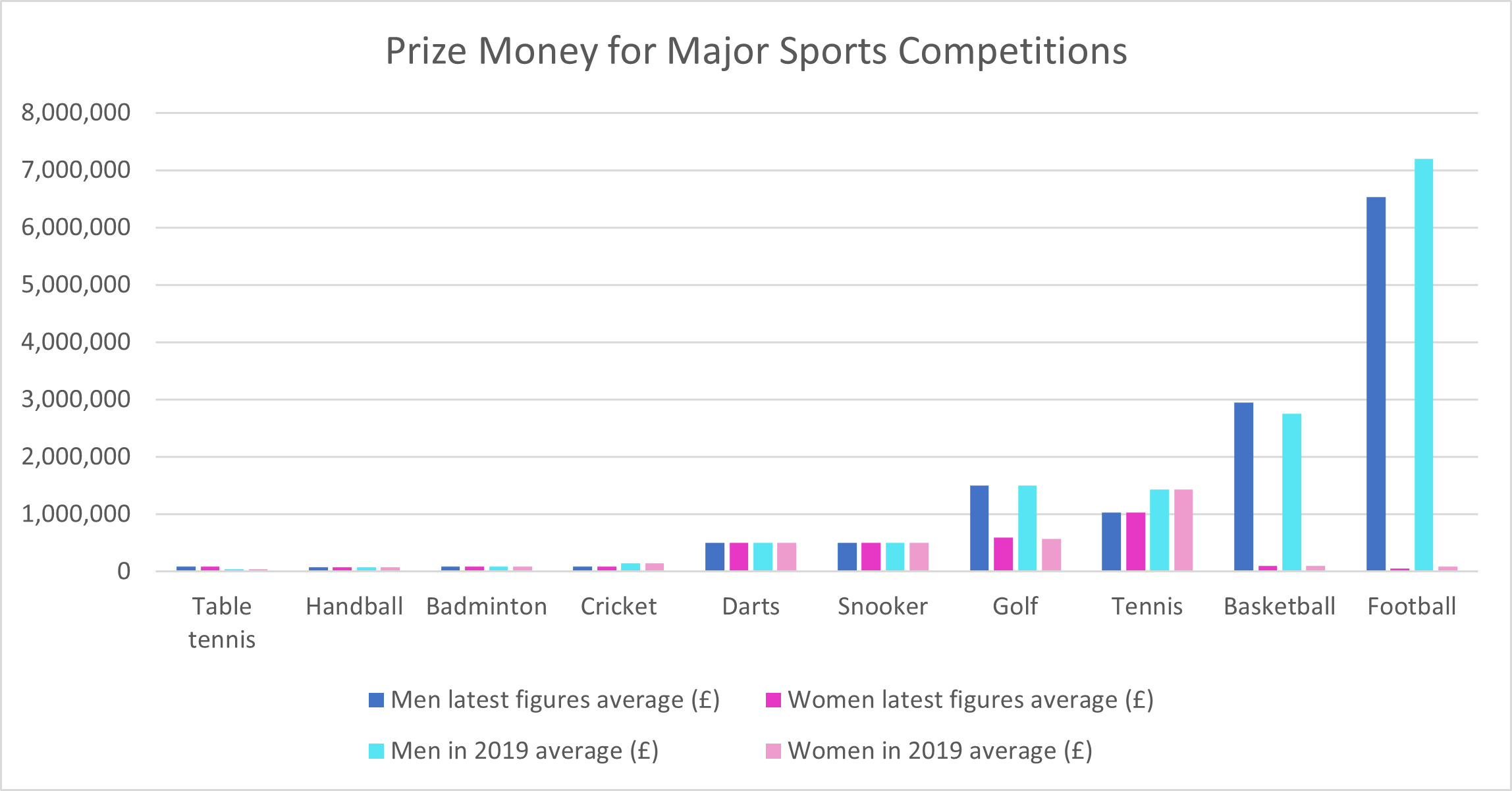 While football and basketball offer average prize money of up to £7.5 million for men, the gender pay gaps are two of the biggest.

Yet, all three sports offer women higher average prize money than football, according to the most recent figures.

Tennis has offered equal prize money in all four majors since 2007 and provides the highest average prize money for women in major competitions than any other sport.

While it appears prize money for darts and snooker are equal for men and women, the World Championships are male-dominated.

However, women have the same opportunity to qualify as men, and if successful, they compete equally for the £500,000 prize.

Football has by far the biggest gap in prize money for men and women.

Golf, football, and basketball were the only three sports in the study that did not offer equal prize money for at least one major competition.

Mehmet said: “If it’s our jobs, we’re going to put in the same number of hours and effort and make the same sacrifices, if not more, because of our kind of scarce opportunities in comparison. And yet I believe as professional sportspeople we are significantly underpaid unless you are really in that top 5-10%.”

While a £716,605 prize fund might seem like a lot, the week-to-week prize funds on Tour, particularly on the Ladies European Tour, are much lower.

The men also had 23 more events to play in, which equated to €72,006,038 more available in prize money than the women last year.

While golf provides the fourth biggest average paycheque in sport, it is also expensive due to the cost of travelling and staying in hotels for large portions of the year.

Things are improving on the Ladies European Tour, with eight more events this year than in 2019 and higher prize funds, but the gender pay gap is still prevalent.

The men’s and women’s European Tours recently joined forces for The Scandinavian Mixed, a competition with equal numbers of men and women competing for a €1,000,000 prize fund.

Support from the men’s tours and greater media attention will help reduce the gap in prize money.

Cricket has made a concerted effort to provide equal prize money for men and women.

However, equal prize money is specific to these two tournaments, and the ICC is yet to commit to providing this for other events.

Women’s cricket journalist and historian Raf Nicholson said she believes these two tournaments are the exception as they are relatively new and introduced as women’s cricket is becoming more popular.

Nicholson added: “The fact that no country has anything remotely approaching pay parity suggests that getting excited about equal prize money is perhaps premature. If a board like CA or the ECB wanted to make a real statement, they would introduce equal pay for their women cricketers, rather than equal prize money.”

So, if cricket isn’t providing equal pay, then how close are they to doing so?

“I can’t see cricket achieving equal pay for female cricketers any time soon, if I’m honest, and there is a good reason for that: it would probably require boards to reduce the amount they pay the men,” said Nicholson.