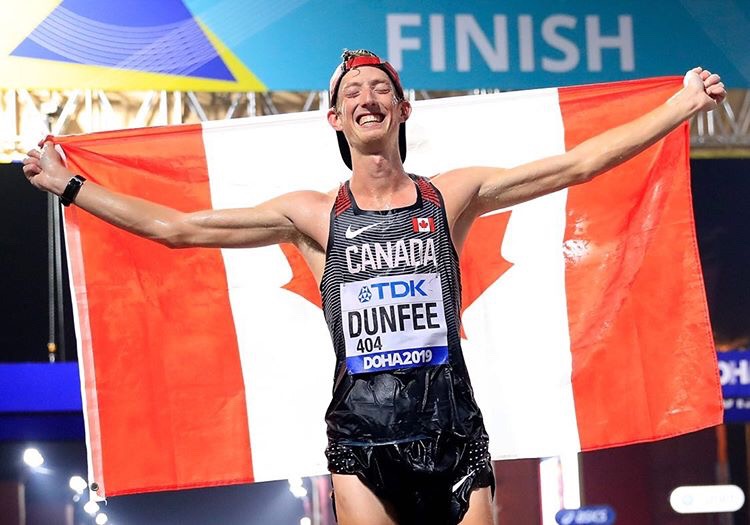 In Rio, Canadian race walker Evan Dunfee thought he had finished on the podium.

The original bronze medal winner, Hirooki Arai of Japan, had been disqualified for bumping the Canadian, and Dunfee was upgraded to an Olympic medal.

However, an appeal by Japan proved to be successful and Dunfee once again settled for fourth place.

In the three years since, he has been training for the 2020 Olympics and using his platform to promote race walking.

The 50km race walk is one of the most gruelling athletic events and it requires significant mental fortitude.

On the 28th of September, at the World Athletics Championships in Doha, Dunfee stepped out onto the start line at 11:30 at night—a race time set to try to combat the high temperatures.

Despite conditions that were unfavourable to athletes and spectators alike, he battled the heat, and his opponents, and surged towards the podium with an outstanding effort in the last few kilometres of the race. In doing so, the 29-year-old became the first Canadian to medal in the event by taking home the bronze.

“I was very confident that I was in a good position, that I can race well in the conditions and that other athletes were going to really suffer because they weren’t going to respect the heat,” said Dunfee on his race.

In the past, Dunfee has set his sights on the podium but hasn’t always been able to achieve those goals. For Doha, he decided to try something different by aiming for the top eight instead of the top three.

“Whereas this time around, I was just let’s just go out there and try to finish top eight. It’s hard to tell what could have happened, and hindsight is a funny thing, but I definitely wish I had done one or two tiny things differently in the race and it could have played out very differently. But I think I made the most of how I set that race up and what I went out to achieve. I’m really happy with the execution of the race plan, but the race plan could have used a little more confidence I think.”

To get to Doha, Dunfee battled injuries and consistency in his training. He opted to take time off in 2018, before restarting with a new goal.

He would walk 25km a day for 25 straight days, with the goal of raising $25,000 for KidSport, a Canadian not-for-profit that provides financial assistance and equipment for kids 18 and under to play sport.

For Dunfee, this presented a new challenge: “It definitely complimented my training, it was 675km of work, but I think the best thing it did was it gave me a different avenue to chase my competitive spirit.”

“I was getting burnt out with racing. It was kind of just ‘ah this is the same thing over and over again,’ going to a race, racing really hard and not meeting expectations. KidSport was a completely different outlet for that fire to be reignited. I think that’s the best thing it did, just reinvigorated me heading into the rest of 2019.”

While Dunfee would like to take on projects like this again, for now it is all about the 2020 Olympics.

“The next 10 months will be solely focused on Tokyo and setting myself up to try to win a medal there,” said Dunfee.

“After coming so close in Rio, it’s hard not to push that goal just that little bit further,” Dunfee continued. “What paid off so well in this race [Doha] was just staying within myself and racing my own race and then when people stumble or falter, pouncing on that.”

“I think that Tokyo will probably be much the same, it’s just going in there knowing what I can do and then being ready to take advantage of any opportunities that present itself.”

The Canadian will start off his training by heading to Australia in December, to train with a group of 20 plus race walkers and take advantage of the warm climate.

From there he will spend very little time at home, while training for the World Team Championships in Belarus in May before peaking at Tokyo in August 2020.

Unfortunately for the race walker, the 50km event will no longer feature from 2022 onwards. The International Association of Athletics Federation (IAAF) has opted to go with shorter events, like the 30km, instead of Dunfee’s main event.

Many people in the community, including the Canadian medallist, are disappointed by this decision.

Dunfee says that the 50km is a prime event for the Olympics to promote athletics: “in Rio there were millions of people in that city who couldn’t even begin to imagine affording a ticket to the stadium to watch track and field. The race walks are one of those few events where you can come and bring your family, and you can be a part of the Olympics and it doesn’t cost you a penny.”

The 50km race walk takes place on a small scale, with just 1km of road needed for the loop.

“That needs to be capitalized on. Track and field could use that as an opportunity to bring in new fans,” said Dunfee. “You could have a stage set up with live music, you could have interviews with athletes, you could have meet and greets, you could have ‘little athletics’ type events going on to introduce kids to the sport. There is just so much that you could do with that idea of a festival.”

Looking at the future of his sport, Dunfee would like the opportunity to organise the race walk event properly: “If you’re going to take the event away from us, can we at least do one of them right?”

In Japan, race walking is a more popular sport and, with a potential medallist in Doha world champion Yusuke Suzuki, this is a massive opportunity for the Olympics to build the 50km race walk into a marquee event. http://gty.im/1172144068 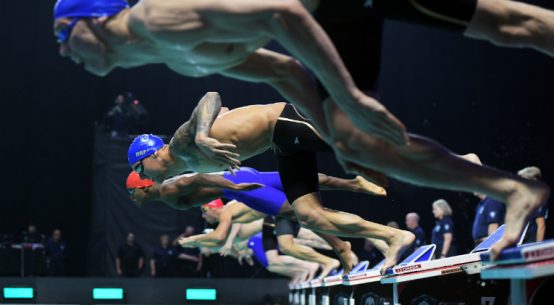 Is the International Swimming League what the sport needs? 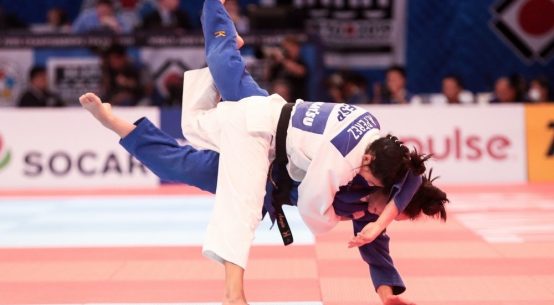