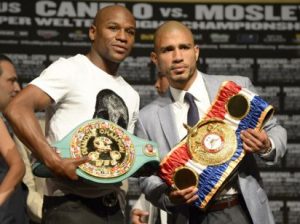 “You a hell of a champion, you the toughest guy I’ve ever fought”

This was Floyd Mayweather’s message to Miguel Cotto after their 12-round battle billed as ‘Ring Kings’, which took place on the 5th of May, 2012.

Mayweather had beaten Cotto in one of the toughest fights of his career. Immediately after the final bell rang, we saw a bloody and bruised Mayweather stand on the ropes to thank the crowd.

With 42 wins at the time, 26 of those coming by KO/TKO, it was rare that we saw the undefeated Mayweather take some damage in a fight.

He is impossible to hit, and this makes him the epitome of the “sweet science” of boxing, the art of hitting and not being hit.

At the time, Mayweather was the challenger, as the ‘B side’’ meant he came out to the arena first. Which is weird to think about, considering how he was one of the most decorated fighters in the history of the sport.

During his time in the sport, he claimed a total of 15 world titles in four different weight classes. He conquered every division he fought in and finished his career with an impressive record of 50-0.

On the night of the bout, Mayweather was dazzling. Cotto came out in the first round with the intention of roughening him up. The Puerto Rican star charged forward and took the center of the ring and tried to be the aggressor, which didn’t flatter Mayweather. This allowed him to pick his shots and ultimately out-box Cotto for that round.

What made Mayweather phenomenal was his ring awareness and choosing his moments to fight in the pocket: 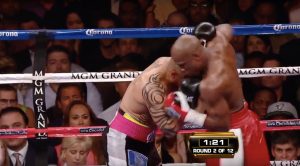 Or fight on the outside: 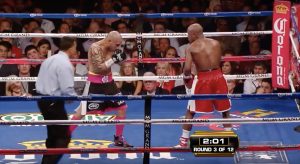 His transition from fighting in the pocket, landing some scoring shots and moving out of danger in a matter of split seconds makes it so difficult to contain him, 50 men have tried and none of them could outsmart the best defensive boxer of all time.

In the picture above, is when Mayweather is at his best. His left hand is kept low and his chin is tucked behind the shoulder. This allows him to do two things:

Against Cotto, this allowed him to be successful in landing the left jab to the body in the earlier rounds. Mayweather used the left hand to the body to set a trap to enable him to unleash overhand right, which landed successfully on Cotto on many occasions. This also allowed him to use the left hand as a stabbing hook to the side of Cotto’s head as he would lean in with his hands up.

Cotto was having trouble; he knew the only way he could land on Mayweather was to turn it into some sort of brawl, closing the distance and fighting on the inside – but once again Mayweather’s boxing nous proved supreme. Whenever Cotto leaned in, Mayweather’s left hooks would clatter on the side of his head. In the fourth round, Mayweather would unleash the most punishment with his hooks on Cotto. He landed eight combinations of the left jab followed by the right hook in a row.

Like a matador with a cape, Mayweather lured Cotto towards the ropes. Which many people did not understand.

“You don’t have to do this with a power guy, you can tease a guy with no power and try to suck him into something but he (Mayweather) wants to. He wants to show how good he is of a fighter” said the commentator.

The fifth round would be very frustrating for Cotto because he believed with his power he could hurt Mayweather on the ropes. Yet, this was not the case. Mayweather implemented the “shoulder roll” tactic also known as the “philly shell”. One of the trickiest defense tactics in boxing, which he mastered. Chin tucked behind the shoulder, right arm protecting the lower abdominal section from body shots and left arm used to parry off shots. 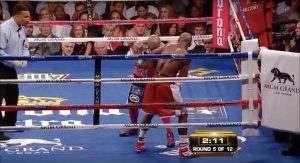 In the picture above, Mayweather is on the ropes, Cotto is leaning in once again and is throwing shots, but this was to no avail.

Mayweather was rolling with the punches to limit the number of shots Cotto can land, despite being in a vulnerable position.

What was fascinating, was that when many would appear to be at their weakest, Mayweather was at his strongest. By rolling with Cotto’s right hand, and allowing him to hit the shoulder, this opened Cotto up to numerous counter right hands. Mayweather bouncing off the ropes also allowed him to utilize his right uppercut.

Mayweather’s brilliance made Cotto only land 12 out of 68 total punches in that round.

This was not a walkover fight though. Cotto’s constant pressure limited the number of punches Mayweather could land too. He landed only 26% of his total punches despite an average 46% in his previous nine bouts.

In the next round, the sixth, Cotto would win his first round of the fight. He took the frustrations of the previous round and had a bit of success with his shot selection. The round resulted in a busted and bloody nosed Mayweather.

For the remainder of the fight, Mayweather would cruise his way to victory. With his crisp jab being heard all the way down the Las Vegas Strip.

Floyd Mayweather’s boxing ability will always be overshadowed by his past. Outside the ring, the stench of domestic abuse (which he served time for after his bout with Cotto) and his constant legal battles with the taxman will always follow him.

Even though he was a fantastic boxer, he has to be held accountable for his actions

After the recent sudden passing away of the mother to 3 of his kids, Josie Harris, who he referred to as “his rock”, “his sweetheart” in a series of Instagram posts, you know Mayweather is hurting.

Life doubled down on him a few weeks later when his uncle and former trainer, Roger Mayweather, passed away after a longtime illness. It must feel like the world is closing in on him.