Posted on 23 November 2020 by Colin Benjamin 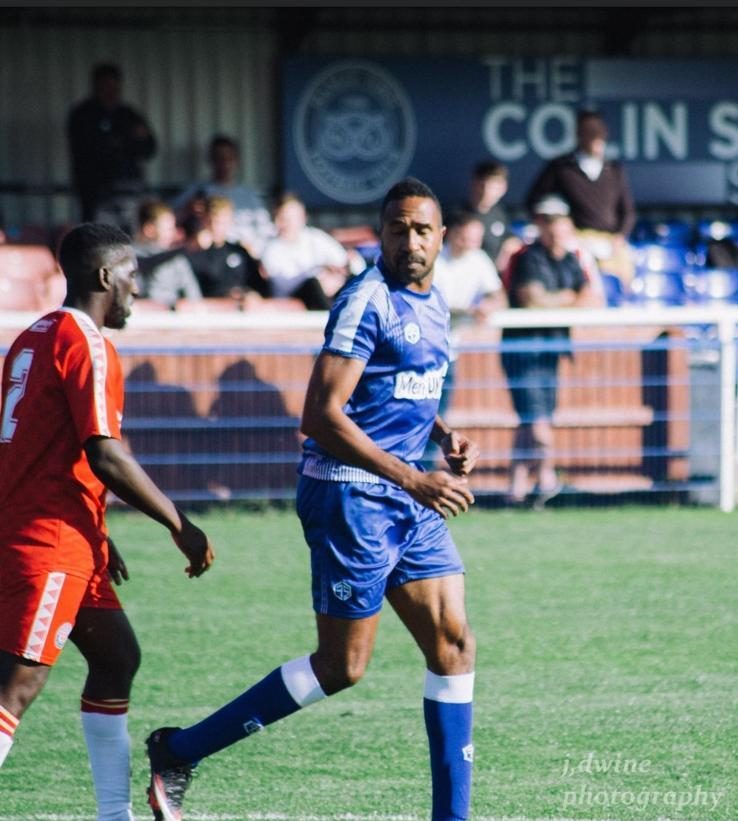 An insatiable love both for football and the Stoke-on-Trent community is what encouraged him to turn out for Hanley Town in the North West Counties League (NWCFL).

The 41-year-old made his return in the FA Cup, scoring in a 3-2 win over Redditch United propelling the club to the second qualifying round for the first time in the club’s history.

They fell in that round, losing 4-1 to Ilkeston Town, but a mere defeat cannot dampen Fuller’s enthusiasm.

“The passion is still there, once the ball is rolling and I’m on the football field, that’s what makes me tick and nothing else matters to me,” Fuller said.

“Hanley Town supporters are a mixture of Stoke and Port Vale (League Two) fans. That motivated me to come back out.

“Before that I was playing every Tuesday and Thursday on the Crewe Alexandra astroturf with former Stoke players, so I was already in good shape, hence I thought why not come back and play?”

Fuller admitted that, as well as quenching his undeniable thirst for playing, there was another big reason behind his comeback – local loyalty.

“On joining the club, the owners and I agreed that the signing could help give the town a lift. Stoke is my home away from home having been here 15 years now.

“We may not win all the time, but if the Stoke fans in the area and football fans in general can come and, just by seeing me play, make them happy, then that alone would have made my comeback worth it.”

The former Jamaican international is one of the few Caribbean-born players who had a long professional career in the English system.

As well as his beloved Stoke, he turned out for Crystal Palace, Preston North End, Portsmouth, Southampton, Ipswich Town, Charlton Athletic, Blackpool, and Millwall, as well as Hearts in the then-Scottish Premier League.

He also won 72 caps for his country.

Remember when he became a 6'3" @stokecity Messi against West Ham?

Christ almighty what a goal that is.pic.twitter.com/T07UdCRDfR

His native Jamaica (1998) and Trinidad & Tobago (2006) are the only two English-speaking Caribbean nations to participate in a FIFA World Cup.

The 2026 World Cup in USA, Mexico and Canada provides an easier path for Caribbean teams to qualify given the tournament will have 48 teams for the first time.

Despite this, in Fuller’s opinion one of the reasons that Caribbean teams have not competed on the biggest stage for 14 years is that players from the region no longer play regularly throughout the English football system.

“The experience of playing in England for players from the Caribbean is golden, with professionalism and training that is not seen in our region. This is no disrespect to Caribbean coaches, but this is just a basic fact.

“Jamaica and Trinidad would not have qualified if the Caribbean-born players in those teams didn’t have the level of English and European football experience, to mix with the overseas born players and the very good home grown players playing in the local leagues.”

Fuller credits European leagues for expanding the horizons of Caribbean players and hardening them for the challenges of CONCACAF qualification.

“We played the USA and Canada in places like Boston and Toronto in snow at minus temperatures, and in Mexico at the Azteca in front of 100,000 people.

“Our players now can’t experience that and challenge these teams in those conditions as we did when we came to Europe.

“We could argue about new FIFA rules and work permit criteria making it tougher to come here, but if your quality is good enough you will get here. Leon Bailey right now is in Germany [Bayern Leverkusen]. It’s a perfect example of this.”

English fans remember Fuller most fondly for his Premier League days with a Stoke City team who enjoyed a 10-year run in the top flight between 2008 and 2018.

While disappointed that Stoke aren’t currently competing in the Premier League, Fuller is backing the team to at least reach the Championship playoffs this season.

“No team has a divine right to play in the Premier League or any top league in any country. You have to earn the right, especially coming up from the Championship. Unfortunately Stoke haven’t earned that right since being relegated in 2017/18.

“Things are looking much better now this season and I’m expecting them to at least make it to the playoffs. James McClean is a key player, and I like what I see from the new manager Michael O’Neill who did a great job keeping Stoke in the Championship last season.

“Also, with the rich ownership in Bet365, they are one of the better financed teams in the league. Financial Fair Play (FFP) is against them a bit because the team can’t spend as much as they would like to.

“But being in the Championship isn’t all about spending money, rather the smart acquisitions you make to the squad.”

Whether it’s with Hanley Town or somewhere else, wherever Fuller makes the final sojourn in his professional journey, he intends to stay in football by going into coaching.

“I’m currently working on my UEFA B license, the completion is delayed a bit because of the pandemic. Coaching would be a natural progression for me because as I said before my love for football will never die.”

Who said the magic of the FA Cup is dead? @Tiger93Creedon describes the stories of the Third Round from @chorleyfc players blurting out Adele's 'Someone Like You' to @crawleytown Nick Tsaroulla's emotional interview after victory over Leeds United #FACup https://sportsgazette.co.uk/something-like-the-fa-cup/