Arsenal Fan TV and their Manchester United fan equivalent “The United Stand,” have come together for a live 24 hour telethon starting mid-day on Saturday 18th April, with all funds raised going to the NHS. In an unprecedented move of club fan tv co-operation, AFTV founder Robbie Lyle spoke of the live-stream telethon where all fans are asked to donate to the NHS via their Just Giving page – Football Fans for the NHS.

“We’ve teamed up with The United Stand. We’ll be raising money, we’ve got a Just Giving page and all the revenue from the videos, the live stream and any videos cut from the live stream is going to go to the NHS. We’re going to be encouraging people to donate to the Just Giving page. It starts at mid-day this Saturday on our channel AFTV and we’ll be swapping over channels every three hours, going right through the night,” said Lyle.

The two rival channels wanted to cooperate to raise funds for the NHS and play their part in tribute to frontline healthcare and other workers with this unique initiative.

Despite the coronavirus lockdown, Lyle speaks of being just as busy as ever. His recently broadcast documentary on ITV “Football Fans Under Their Skin,” was received with rave reviews with a hard hitting narrative in which Lyle wanted viewers to feel and understand what black and Asian fans had to, (and in some cases continue to) endure at matches.

“I’ve seen a lot of documentaries on football, but they’ve always been from a footballer’s point of view. So we see racism in football and how the players get booed and racially abused and it’s terrible. But I used to think to myself, when you was a fan, it was even worse because they were not only throwing bananas at you and booing you, they actually wanted to beat you up, they wanted to kill you.”

It was in a racially hostile 1980s environment when Lyle, a former surveyor, started to attend matches at Highbury and some away games. His friends perceived him as being “mad,” they knew it wasn’t safe for any black or Asian fan to go to games anywhere in the country, where often you’d also find recruiters for right wing organisations. Whatever the match, Lyle sadly knew that racist bile would be directed his way. 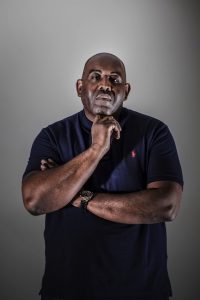 Lyle would often encounter racism at games in the 80s (R. Lyle AFTV)

“When you went to away games, it was common. Literally every game you went to somebody would walk past you… you black bastard, you black this, you black that.. that was regular, whether you were in a group, whether you were on your own, they didn’t care. Sometimes in the grounds, you’d look over into the other section where there’s a fan of the other club, pointing at you making monkey noises. It was common and that’s why a lot of black people didn’t used to go to football.”

Despite the open hostility, the tension, the fear for personal safety, Lyle was hooked on the game and nothing would deter him from following his passion. A successful figure on the reggae scene in his younger days, Lyle knew how to circumnavigate potentially volatile situations, so going to games became an extension of that sense. For other black fans however, Lyle concedes that racism deprived many of his generation. They steered clear of football grounds despite their love for football.

Shamefully, football did nothing to bring these communities in.

“I can understand why people wouldn’t want to go because it wasn’t a great place for a black person to be in those days because it was very dangerous. Even though you had black players on the pitch, it made no difference. There were certain clubs which were particularly bad like Chelsea, West Ham, Millwall, Leeds. These fans had been infiltrated by racist groups so they had a lot of racist fans and even the fans that weren’t racist joined in with the racist stuff.”

In the ITV documentary, Lyle wanted to gauge the feeling of racism in football today. But some footage didn’t get beyond the cutting room laments Lyle. Following last October’s abandonment of an FA Cup qualifying tie between Haringey Borough and Yeovil Town where allegations of racism by the Yeovil fans towards Haringey players was reported, Lyle set off to the west country to try to ascertain what was behind the ugly incidents.

“We interviewed Yeovil fans and that was very interesting. We found out that they were very embarrassed by the whole thing. There was a couple of them that felt that… I remember there was one guy we interviewed, he was an older guy who was saying that, ‘come one it’s nothing.’

“In the documentary, I wanted to show what it really felt like. We wanted to get out and speak to other fans. I thought the Leicester guys were brilliant, the Punjabi Wolves were brilliant. I love the Punjabi Wolves. When I went there, I thought it was going to be an Asian thing, but 70% if not more who were there were white. What you didn’t see in the documentary, there is also a downstairs to that part, packed. People come there and get a curry before  the game and have a sit down. It was brilliant.

“What those guys have done is outstanding and their fans are proud of that group.“

Lyle reflected on the footballing authorities inability to tackle incidents of player on player racism. Fans get banned straight away if found guilty of racist abuse, so why should it be different for players he reasons.

Leeds United’s goalkeeper Kiko Cassilla was banned for eight matches and fined £60,000 after being found guilty of racially abusing Charlton Athletic’s  Jonathan Leko in February, and that can’t be right says Lyle. “ He called the man by the N word. He should have been banned for life. Our message is we don’t tolerate that.”

Responding via his Twitter account, Cassilla said “I would NEVER use my words with a racist meaning.”

Asking players to walk off the pitch following racist incidents is not the answer to eradicating racism from the game says Lyle, who wants to see the authorities back up their words with substance.

“Why do the players have to walk off? What’s the point in having these governing bodies who are supposed to be in charge who are saying .. we take it seriously, read out this and when it happens they don’t do nothing. If you’re not serious, people will still offend. We need to have [racial] diversity [at FA, Premier League, UEFA, FIFA] and we need to be serious. When a football fan does it, he gets banned for life. It should be the same for footballers.”

Lyle has become a considerable voice in football following his setting up of AFTV in 2012. Without any filming or editing skills, he recognised the potential of his Arsenal channel from a friend who had the format on a boxing channel. His voice however has not resonated in some quarters, while at some away games, the chant “Arsenal Fan TV get out of our club,” can be heard.

Lyle’s defence is robust, and as robust as it was on Talksport last December where he called out former Crystal Palace owner and radio pundit Simon Jordan after he said AFTV should be shut down. That was “disrespectful” says Lyle.

“He said something like, if he was the owner of Arsenal, he’d shut us down. I’m like hold on a minute, what’s the difference between what we do and what you guys do on Talksport?

“Talksport invite fans to call up and have their honest opinions. We do it [too] but we just do it on film. You’re on a platform, it’s almost as if you can do it, but nobody else can do it. Or a fan is not allowed to have their opinion, the person who has their opinion has to be an ex-owner of a club, or ex-player? No! We pay our money every week, we go and watch football week in week out. A football fan 90% of the time watches their team more than the pundit.

“Why are those fans who have gone through thick and thin with their club, why are they not allowed to have their say? Why are they being told by people like Simon Jordan to be quiet? He can tell me about club ownership. “

“You can’t tell me about watching my football team week in week out because you haven’t been where I’ve been so that’s the point I wanted to make to him.”

Claims that AFTV feed off negativity is also given short shrift by Lyle whose channel has over 1 million YouTube subscribers.

AFTV follow Arsenal home and away and provide a fans’ platform

“ It’s absolute rubbish because win or lose, we’re there at every single game. The criticism is unfair because if you have a big game, that’s where you get your biggest views. If Arsenal play Tottenham or Man. United, Chelsea, there’s massive interest. If Arsenal lose to Norwich, that’s a shock. So the normal views that we get when people expect us to win that game, there’ll be a spike in those views because it’s a shock. It’s no difference to anybody else, it’d be the same for a newspaper, the same on TalkSport, and BBC 5 Live.”

Collaboration between Arsenal and AFTV has happened in the past, Lyle would like to do more, but says he remains puzzled why his channel is not allowed at the club’s press conferences when other clubs’ fan tv channels are invited to attend.

But for now, it is AFTV’s collaboration with The United Stand, Arsenal with Manchester United , which will occupy Lyle beginning on Saturday for a 24 hour telethon collaboration  for the NHS.

“They’re like soldiers on the front line right now and they deserve it.”