RugbyX may give rugby the revolution it needs. With fewer players going into 15s and 7s this new format, masterminded by Fiji’s former Olympic gold medal-winning sevens coach Ben Ryan, is a way to bolster grassroots rugby and to involve more people into the game. With both 15s and 7s being technically difficult and extremely tiring, Rugby X is short and simple and can teach beginners the basics of rugby in limited space with limited resources. It could save grassroots rugby, which is highly underrepresented in state schools, particularly inner-city ones.

The brand new, 5-aside, high-speed, high-intensity Rugby format made its debut at the O2 Arena in London last week. Spread across an afternoon and evening session over 16,000 fans turned up to witness a true spectacle. Fire, lights, booming music, dancing fans and end to end, non-stop rugby was on show at the world-famous venue.

Rugby X is played on a 55m x 32m pitch with an emphasis on skill over power. There are five players per side plus seven rolling substitutes and a single scoring unit, 5 points per try with no conversions or penalty kicks. Kick-offs are replaced by tap starts on the 5m line and line outs are replaced by quick throws made by a substitute.

Additionally, the matches are only ten minutes long with no half-times, there are uncontested three-man scrums and no changing of ends.

What did Technical Director Ben Ryan make of the first tournament?

The competition’s technical director Ben Ryan was extremely happy with the fast-paced nature of the new format and shed some light on the ideas behind the creation.

“We have no intention of this game ever trying to compete with 7s or 15s, it’s a really good entry-level to the sport,” Ryan said.

“I don’t see it ever competing with the World Sevens circuit, but I think as a one-off 2-and-a-half-hour indoor venue at international level I think it works, the signs are pretty good,” he said.

“I have been really pleased with the sessions and the player’s feedback has been excellent,” he added. 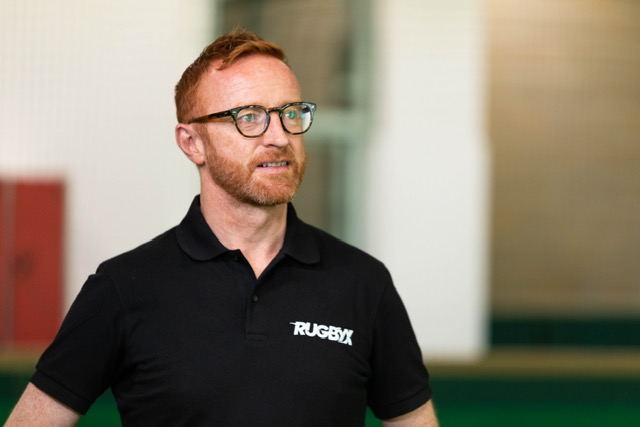 But what comes next?

RugbyX is all about getting people involved, whether as spectators and supporters or as potential new players. Ryan wants to expand RugbyX in order to encourage participation in all formats of rugby.

“If it works out, we hope to expand this next year with the other unions and start to do some really good development work in the grassroots.

“We want more participation, so it is only a good thing if we have a really simple tool to either come and watch and enjoy the game and then maybe go and watch 7s or 15s.”

Where is it being taken?

The plan is to expand RugbyX to as many places as possible, starting with schools and the youth of Britain.

“Earlier in the day we were teaching kids, who had never played rugby before, coming from inner-city areas, that really enjoyed the game and got the hang of it in half an hour,” Ryan explained.

“We are going to schools, particularly inner-city schools that do not play rugby at the moment to encourage participation.”

RugbyX has been created to be an easy entry-level to the sport, where you can get to grips with the basics of rugby in the easiest way possible. The format will look to expand into Tier 3 nations, like the Caribbean who lack the facilities for 15s.

“The Caribbean have already contacted us and talked about running this in the Caribbean because of lack of pitches and also an entry-level sport just to get them propelling into the 7s game.”

However, Ryan isn’t stopping there, he has also been in conversation with other organisations to grow the game.

“The prison service and local councils have also talked to us, some of the youth games that are available as well. There is a lot of interest and a lot of people here from various governing bodies that are coming to have a look and see if they fancy this being part of a program going forward.”

And the players and coaches?

USA co-captains Alev Kelter and Kayla Canett certainly enjoyed the tournament and they spoke to the Sports Gazette about their experience at the O2.

“I think this needs to continue and I’m excited for more girls to try it out,” Kelter said.

“We are just excited to be here on the first inaugural RugbyX tournament, making history and this won’t be the last.

“It was awesome, felt like a concert with the lights and we had fire going off before we came out, it’s definitely a professional setting and something I hope continues and it was extremely fun to play in.”

Co-captain Kayla Canett said: “It was a very exciting form of the game, you had to be turned on at every second.”

Emma Uren of England scored an incredible hat-trick in the final and outfoxed her opponent in the winner takes all shoot-out, unsurprisingly she was delighted at the result.

“It was unreal, it’s indescribable, we haven’t ever had that. I think what is so great, is actually having so many people behind us and showcasing women’s rugby that’s the biggest thing,” Uren said.

Uren could not hold back her excitement when asked if the team would like to play RugbyX again: “100%, the whole event isn’t something that you get every day, it’s not something that comes round often, a home crowd, your family and friends in the crowd supporting you and bringing everyone together it’s amazing.”

USA Men’s coach Mike Friday also complemented RugbyX and believes there could be a gap in the market for the new format.

“The atmosphere, the fast-moving nature of it, I think it has a lot of appeal. There is a lot of individual moments within the game, as opposed to the purest sense of the game,” Friday said.

“I think that there’s a gap in the market for this sort of razzmatazz and fast-moving part of the game. It will inspire the younger generation and also create a really fun exciting event which corporately would appeal to the cities as well.

“I think there’s a lot of synergies to what you see here with the darts where you create an event and then it’s all about how you attract the stars to come and how you convince coaches to release their players to participate.”

All the signs are positive for RugbyX and if placed and pushed correctly it may revolutionise rugby. For now, Ryan will be looking to grow rugby, RugbyX, and perhaps a RugbyX part 2.