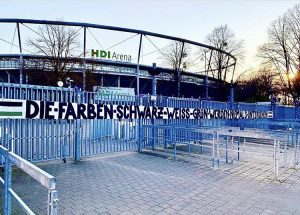 This is a routine that has been taken out of many athletes’ lives all over the world. Countless of hours training have turned to countless hours sitting around at home with nothing to do. For the first time since arriving in Germany, American striker, Sebastian Soto, couldn’t complete his routine. .

Only seven months ago, Soto had completed his first season in European football. He was the second-highest goalscorer at the U20 World Cup in Poland – had appeared three times in the Hannover first team in the 1. Bundesliga and had been one of Germany’s most prolific goalscorers at under-19 level. All of this seemed a million miles away after one of his teammates tested positive the coronavirus

“First day out of quarantine man!” he boasts to the Sports Gazette today.

Soto has good news for me: after two weeks in quarantine, he answers the phone on his way back from a test and can confirm the results came back negative.

Hannover 96 central defender Timo Hübers, was the first professional footballer in Germany to test positive for coronavirus. Although it’s reported he never was in contact with anyone of his teammates it brought a shock to German football on how serious the situation was.

“We couldn’t believe it, because we had a normal day training, and this was before it all blew up” Soto recalls.

Hübers became one of the 37 000 cases of coronavirus in Germany after attending a local event. Luckily, he had not passed it on to any of his teammates.

“We had a meeting before the training started. The coach was with the doctors and said one of the guys had tested positive for coronavirus.”

Soto and his teammates had to straight away get tested and wait for the results that came the next day. He admits that they had jokingly spoken about one of the teammates getting the virus prior to finding out that it actually did happen.

Significantly, Germany has a lot of cases, but this countered by an extremely low death rate. There have been 200 deaths from 37 000 cases – a mere 0.6%. This is a result of the extreme measures Germany has gone through to test thousands of people, which allows them to identify cases quicker and stop the spread of the virus. Testing more people instead of just testing those who are really ill also has decreased their mortality rate.

Soto explained to the Sports Gazette the extreme measures the club, government, and police force went through to make sure the squad remained in quarantine.

“I thought it wasn’t so serious but the first day they said, because we have cars from the club, they were telling us that the police know which cars we have and our license plate numbers and if they see you outside you could get arrested because the government said the whole team must just stay in quarantine. So it was very serious.”

Danny Clark reported earlier how athletes kept busy, the club has assisted players to ensure they keep fit. Soto hints a bit of frustration with the situation and rightly so.

“Not having to play football for that long is tough and the club gave us a stationary bike and all your exercise and fitness of the day is sitting on a bike and working out with weights because I have weights in the apartment. After a few days, you like “Man I’m sick of this”. I just want to step outside”

He admits besides his workouts provided by the club, the quarantine has given him time to jump on the consoles.

“Of course man, I play video games (laughs) what else can I do, I play Fortnite. I play with my friends in Holland and other friends who play in Germany so it’s a good way to keep in touch” he says.

As an 18-year-old in a foreign country, it’s not easy being alone in a situation like this. He fears for his family back home and remarks about how his grandparents are so terrified they don’t even want to step outside. But Soto is a big boy, he has overcome adversity like this before and an “it is what it is” psyche allows him to push through.  After all, he left home at 15 to achieve his dream.

Soto is coming off the back of an elite performance with the USA U20 Men’s National Team at the World Cup in Poland last year. He came tied 2ndin the top goal-scoring charts after two braces against Nigeria and France.

“It kinda changed my life a little bit. The experience was so big, playing against the best, they were the best in the entire world and that’s the level you want to play at. It’s that and also realizing you up there as well – It was life-changing” said Soto

Prior to that, he was incredible at under-19 level in Germany scoring 17 goals and six assists, earning him a debut with Hannover 96’s first team. He understands the Olympics postponement is not something you want to be postponed but he is aware of the positives to take from it

“It is what is, but for me, I have another year of professional football to get my name out there more and progress.

The virus will go away, people will go back to their daily lives, athletes will play again, and Soto will find the back of the net once more, a joy he cannot put into words – a joy this long time out will make even sweeter.

In translation: The colors black, white and green will never go under.