Posted on 20 June 2021 by Nathan Frazer-Carroll 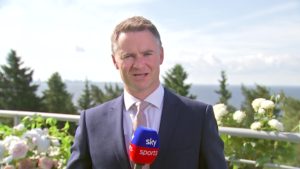 On Sunday June 13 England kicked off their Euro 2020 campaign with a 1-0 victory against Croatia.

Cries of ‘it’s coming home’ echoed throughout pubs around the country as fans watched the three lions record their first ever opening fixture win at the Euros. The life of a dedicated England correspondent is less carefree however.

Rob Dorsett has worked for Sky Sports for the past 16 years and has become one of the country’s most prolific and reliable England Football correspondents in the process.

Rob describes his job up as demanding but very rewarding. Prior to the Euros, he covered the 2018 World Cup held in Russia. During the seven weeks he spent there, Rob didn’t get to go to a single game and continuous demand for live reports meant he stayed on British Summer Time for almost the entire tournament.

As gruelling as it that sounds, Rob emphasised that things could be a lot worse. “I remember the dark days where England journalists couldn’t get anywhere near the team, I’d take an eight-hour time difference over no access and poor results any day” said Rob.

Rob recounted the years of Fabio Capello’s reign as England manager saying: “It was just so difficult to do the job. He didn’t trust the press at all and his communications team were also quite suspicious so that was pretty much that.”

Capello did have some reason for his distrust. Throughout his tenure he saw his team hotel bugged by journalists, major scandals surrounding the private lives of Wayne Rooney and John Terry and publicly stated his annoyance over England scandals.

Since then England has moved in a new direction, one that is more inviting for journalists. “Under Roy Hodgson it changed a great deal, he and Gary Neville had a philosophy where they would ask the journalists to come on the same plane as the team, the idea being, if you have to sit next to the players and get to know them, you’d be less likely to write negative things about them the next day” said Rob.

Rob claimed that the change Hodgson and Neville made, paved the way for Southgate and the relationship England has with the media now.

“It’s gone up ten-fold, in terms of access and our ability to talk to the players since Southgate has been in charge” said Rob.

England fans will be hoping the national team can emulate their 2018 successes and perhaps go even further. There is no doubt that Rob will be crossing his fingers too.

“In Russia it was easy because we got all the way to the semi-final, nobody had a bad thing to say about the squad or the camp. There were actually a lot of tabloid journalists out in Russia looking for scandals and front-page stories. A lot of them came back home because there just weren’t any stories like that for them” said Rob.

But it is far harder to be an England journalist when they’re performing badly. “The audience for newspapers and broadcast media almost expects journalists to give England a hard time if they’re not playing well” Rob said.

Despite Southgate giving journalists greater access, there are still reporters who set out to expose scandals wherever they may be. Phil Foden and Mason Greenwood were the latest England men be caught out having breached England’s social distancing measures whilst the squad were in Iceland in September 2020.

However, Southgate’s handling of that situation was firm yet empathetic, warning that their behaviour would not be tolerated but trust can be rebuilt.

This kind of approach is different to what England fans have seen before. Previously players had been given very little protection from the media meaning issues were handled in the public eye instead of in-house. An approach that English players will likely be thankful for.

England have great chances of success at Euro 2020 provided they’re at their best and it seems clear to Rob that positive stories lead to a positive mood in the camp. Perhaps this is a turning point for the relationship between English press and the players the players that represent them. We can only hope.