When the Nepal Open Swimming Championships take place next year, a new winner will be crowned among the women, as multi-event national record holder Sofia Shah will not be present.

At this year’s championship, Sofia managed to attain a medal in every event she raced in, winning gold in the 50m butterfly, the 50m, 100m and 200m freestyle, the 200m backstroke, the 100m breaststroke and bronze in the 50m and 100m backstroke. 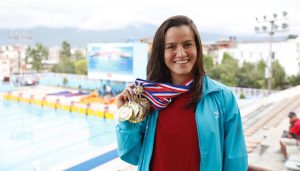 Only a handful of swimmers in Nepal possess the potential to succeed, but the lack of investment in the sport prevents them from fulfilling this. Consequently, many swimmers drop out, choosing to focus on education to provide for themselves in the future.

Sofia explained: “I honestly have no idea where to even begin with Nepal. There are a lot of things that need to happen first as a country before sports can even be considered important enough for funding.”

Sofia decided not to represent Nepal moving forward. Instead, she has moved to the United States to study and capitalise on the facilities and training regime that will improve her on a daily basis at Pepperdine University.

“I believe that I am now in a system that allows me to maximise my potential in and out of the pool,” she said. “The swimming team has a clear structure, motivated and caring individuals who genuinely want to be there and great coaches to help us achieve our goals.

“The coaching staff are very passionate about what they are doing. They’re certified and experienced to train athletes to achieve world-class results.”

As a student-athlete, Sofia’s university is extremely understanding of the demands of her swimming career, providing support, athletic advisers and academic tutors.

She said: “The facilities are probably the largest noticeable difference. The opportunity to swim twice a day year-round makes a huge difference on fitness levels. The advanced coaching styles, nutrition, weight training, and healthcare also make a very big impact.” 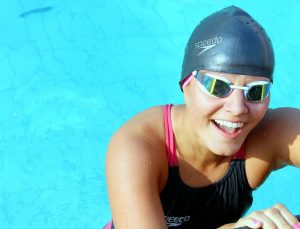 The lack of funding is not the only reason why Sofia decided to not represent Nepal, though.

Her Nepalese roots had been questioned previously due to her appearance and, for a long time, she refused to comment. But enough was enough.

“I loved swimming, but in Nepal it’s not a sport, but a dirty political game that stripped me off my passion,” Sofia explained.

“I no longer want to represent a nation that doesn’t have its own residents and its own people at heart because it’s a constant war that none of us know how to nor have the energy to win.

“In order to address issues, we must recognise and bring to light what the issues are.”

Unable to swim year-round in a 25m pool in Nepal, with only one leaky Olympic regulation pool, Sofia’s level stagnated. All she had was a 20m outdoor pool for five months of the year.

“After a certain point in third world countries, you cannot improve unless you look elsewhere for support,” she said.

But overcoming obstacles has always been key to Sofia. In 2015, for example, she experienced a 7.8 magnitude earthquake — killing 9000 people and injuring 22,000 — during which she had to sleep in her car as it was unsafe to go indoors. She was consequently unable to train. 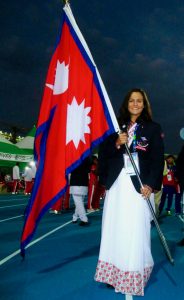 One solution to the funding issue, Sofia suggested, is that FINA extend their scholarship programs to outside their time qualification standards, mainly because many swimmers in third world countries cannot make the time standards they have set.

She said: “There could be more efforts on a local level in raising and managing funds to build proper facilities and potentially hiring a higher level certified, elite coach to bring the time standards up to par to the international level.”

Swimming, though, is expensive. Athletes need swimsuits, swimming gear such as kick-boards, goggles and caps, as well as racing gear with a short lifespan. For anyone to succeed in the sport, they have to somehow finance this equipment, as well as high-quality coaching, strength training, healthcare and nutrition.

“Swimming is not very popular in Nepal. Most people don’t even know we have a swimming team. We were fortunate to place in finals and win some medals at the last South Asian Games which allowed us to gain some recognition, but not much,” she said.

Although there are some great swimmers in Asia — specifically Japan and China — swimming is still not as well known as football or other big team sports like cricket, although athletes from these fields usually don’t perform as well as the swimmers do internationally.

When it comes to recognition as a professional swimmer, many factors are questioned. “The term pro would require endorsements,” Sofia said. “None of which any Nepalese swimmers have received”.

She continued: “We do not get paid to compete in our sport like it’s a job, most of us take part purely for the love of swimming. It’s a very hard process as there is not much funding for our sport and the Nepal Swimming Association does the best they can with the funds they have available.

“Nepal has very little support for athletes and the coaching that the swimmers receive from the national coaches is correlated to coaching mentalities that were acceptable in, maybe, the 1940s.

“It’s almost impossible to gain the same recognition and respect that our male athletes receive. It has gradually changed thanks to a few of us on the swimming side, but even then, our male counterparts will receive much more media attention or praise from the association.”

Although Sofia believes that money and funding towards a development program would be useful, she said that when it comes to money, people lose sight of the swimming.

While finances are an important factor, perhaps the more pressing matter  is the way in which the association is run.

Sofia said: “There needs to be a complete change in members on the Nepal Swimming Association voted by the swimmers of the national team. The swimmers should nominate the people who they believe would best run the association.”

In Sofia’s opinion there needs to be clear policies on duties for each officiating member and if they cannot uphold their duties, then they must be voted out and another person re-elected.

She continued: “Parents of swimmers should not be allowed to partake in the association or vote on decisions.

“Our largest obstacle is the old-fashioned mentality and self-interests of the current members in the association, and nothing can move forward or change if they cannot change.”

These problems in the way swimming is run in Nepal forced Sofia to say goodbye to her dream of representing Nepal. It had reached a point where it began to harm her personal swimming career. She announced this decision on Instagram on April 16th.

“Over the past year of reflection, I have now officially decided that I will no longer compete for Nepal. I say this with a heavy heart but also with a heavy sigh of relief.

“To those still swimming for Nepal, kudos to you because I know how much you bite your tongue to keep your dreams alive. I’m not remaining quiet about it any longer but I understand that you need to. Its time things changed for the future of sport in our country.”

The federation did not address the concerns Sofia raised.