The Spanish Minister for Consumer Affairs, Alberto Garzon, has proposed a series of measures which will mean that gambling firms will no longer be permitted to appear on the front of Spanish football shirts or inside football stadiums. The announcement will see the tightening of marketing opportunities for the gambling industry in Spain.

Garzon’s proposal includes a ban on gambling advertising for events taking place before 8pm and prohibits using the “name brand or trade name of a betting operator to identify a sports facility or entertainment facility.” In addition to this, “no sponsorship activities may be carried out that involve substituting or adding to the name of a team or sports competition or of any other entity outside the sector of gambling and betting, the name or commercial name of an operator”.

Currently only three sides, Real Valladolid, Villareal and Real Sociedad, are without a commercial partnership with a betting brand in La Liga, with nearly half of the league featuring a gambling company as the main shirt sponsor.

The new measures, which were first drafted in February as part of Spain’s ‘Royal Decree on Advertising’, are expected to be in place as early as the start of the 2020/21 season, so long as they gain the necessary approval from the EU in Brussels, something which is thought to be nothing more than a formality.

Impact on the Spanish Leagues

The announcement would see Spain become the second major European league to ban gambling-related sponsorship and advertising, after a decree was passed in July 2019 banning all Italian sporting leagues from gambling partnerships.

There is cause for concern about the impact this crackdown could have on Spanish football, especially due to the financial uncertainty that the coronavirus pandemic has brought. The proposals will force clubs to look elsewhere to find the lucrative sponsorship deals but finding these in the current climate will be more complex than usual, leaving the clubs in a precarious position.

Spanish sports paper AS have reported that clubs could lose up to €80m if the advertising is prohibited, with teams such as Sevilla, Valencia, Osasuna, Levante, Leganes, Alaves, Grenada and Mallorca set to be the league’s biggest losers. The main club sponsor for each of these sides is a gambling firm, and you will find the logos embellished on the front of their shirts. La Liga will also have to find a new regional partner, as it will no longer be able to to work alongside betting firm Sportium.

Whisperings of change in the UK?

But the industry’s tightened grip on football has not gone unnoticed and has come under scrutiny from campaign groups who believe that gambling advertisement in football is at saturation point. A review of the 2005 Gambling Act is promised under the Conservative party manifesto and there is cross-party support in the Commons calling on clubs to outlaw gambling sponsorship in football. A recent report published by a House of Lords Select Committee has also called for the end of gambling sponsorship in football. 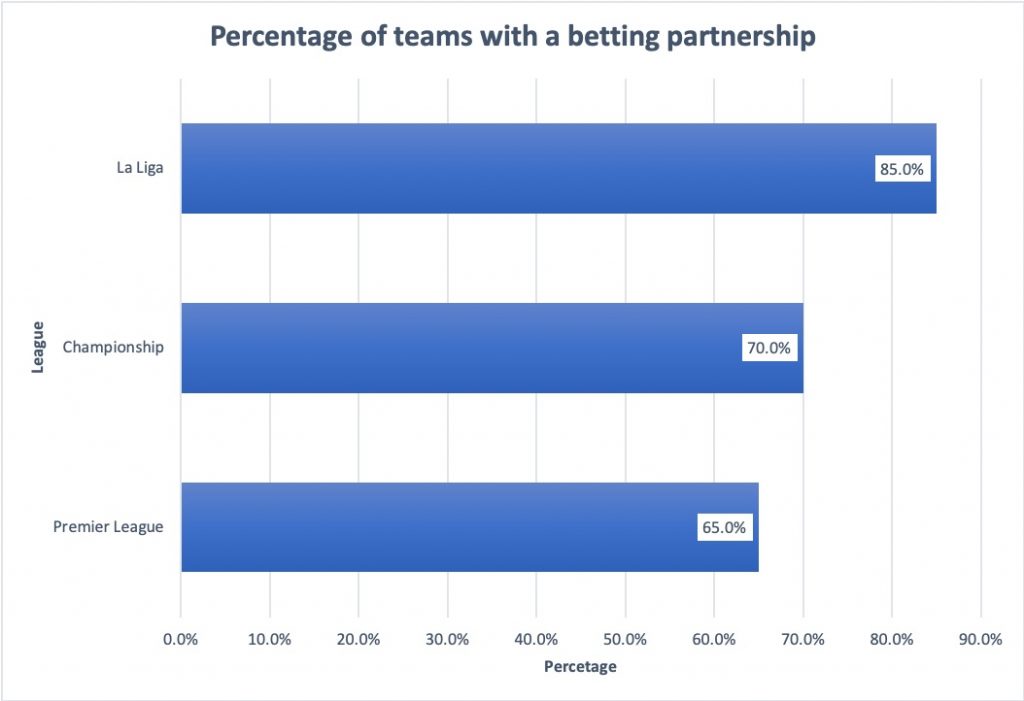 The Committee’s recommendations form part of a 192-page document which warns more needs to done in the UK to prevent gambling-related harm.

“There should be no gambling advertising in or near any sports grounds or sports venues, including sports programmes,” it read.

The report has said that clubs below the Premier League should be given until at least 2023 to find a new sponsor and similar flexibility should also be exercised for other sports.

“Removing betting sponsorship entirely would not unduly harm Premier League clubs but it would very probably have a serious effect on smaller clubs.

“We, therefore, think they should be given time, perhaps three years, to adapt to the new situation. They would not be allowed in that time to enter into new sponsorship contracts with gambling companies, but any existing contracts could continue until they terminate, and clubs would have time to seek alternative sources of sponsorship.”

Chair of the Committee, Lord Grade of Yarmouth called on the Government to take more action and be proactive in regulating what is a deeply unregulated industry.

“Most people who gamble, enjoy it safely. However, gambling related-harm has made the lives of two million people miserable. It leads to hundreds of people each year taking their own lives, leaving families and friends devastated.

“Urgent action by the Government is required. Lax regulation of the gambling industry must be replaced by a more robust and focussed regime which prioritises the welfare of gamblers ahead of industry profits.”

“We have nothing to lose.” Thomas Frank and Henrik Dalsgaard seemed positive ahead of @BrentfordFC’s playoff final against @FulhamFC.

Brentford take on West London rivals Fulham on Tuesday evening for a place in the Premier League, take a look at Brentford’s club captain @PJansson5 thoughts before one of the biggest fixtures in the clubs history ⚽️

In the Whole of Ireland we only have 1 tv presenter of colour.If the Irish media companies were serious about diversity they would provide opportunity’s through internships and work experience.If we don’t get diversity in the Irish media now then when will we?🇮🇪

One last game at Griffin Park. Promotion within touching distance. Can Thomas Frank do what no manager has done with Brentford and get them to the promised land of the Premier League?