Posted on 2 November 2020 by Mitchell Marshall

The furious crash of arms pounding the water, two blurs flying along the surface, fingertips extended to graze the wall hundredths of seconds before any other. Once every four years our hearts race with anticipation for the finish of a swimming race between athletes that have suddenly become the avatar for our national pride in the most important moment of their lives. To prepare for that Olympic moment The Sports Gazette spoke to swimming writer Liz Byrnes to get the lowdown on how the sport has dealt with a tumultuous 2020 and what we can expect in Tokyo.

Byrnes has been writing about swimming for more than two decades; her work has appeared in The Guardian, Reuters, and The Times among many others. She is also the European correspondent for Swimming World magazine and has an ongoing role writing for the International Olympic Committee. Covering three Olympic Games and 15 World Championships she is embedded in the sport even when the eyes of the world have drifted back to football and the latest singing competition.

Chefs without a kitchen, musicians without an instrument… professional swimmers found themselves unable to propel themselves into the water from Friday 20th March, when pools shut down across the United Kingdom, until Saturday 25th July. 128 days and counting with another lockdown coming Thursday. Which begs the question: how do you become the best in the world when you can’t practice your craft?

The IOC’s Olympic 365 initiative surveyed 4,000 athletes from 135 countries and 56% said that their biggest challenge was finding ways to train effectively. In this instance Byrnes is an optimist.

“It is amazing really, the way that people have adjusted. I think it shows what can be done. I think we’re very adaptable creatures,” she said.

Great to have a pool to train in at my house! Thanks to my best mate @edwardbaxter98 for sorting out with @bhtubs Putting some great sessions in without putting anyone at risk 🙌🏼🙏🏼 pic.twitter.com/bohtx7Lxax

Byrnes cites the example of Team GB star Adam Peaty, who had a flume pool flown in and lifted into his backyard with a crane, allowing him to swim against a current in limited space. His coach Melanie Marshall also linked swimmers for remote workouts over Zoom.

“Talking to them I think the main thing they needed was to maintain their fitness levels, so a lot of them went about that in a different way. So Ben Proud, he made himself a barbell out of concrete! And he is a proper sprinter as well, he needed to keep his strength up.”

A homemade gym calls for a homemade barbell! 🏋️‍♂️ Keeping ontop of your training routine these weeks needs some inventive solutions so check out how I’ve managed to keep the consistency at home! 💪 Make sure to share your original ideas with me by using the #hometeam #createdwithadidas #heretocreate #stayathomechallenge

Beyond physical training Byrnes described how the mental challenges of training during the COVID crisis may adversely affect some athletes, but she insists that the ‘creme de la creme’ will take it head on and go quicker than ever before.

“Some of it will play into the psychology of it. People like Katie Ledecky are like ‘right, it’s not what I was expecting, but I accept it’s off. I’m gonna take a little bit of time to reset but then I’m going again, bring it on. What can I do in this year to make me even better’.” 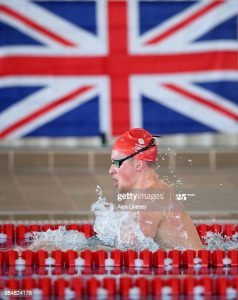 After a disappointing showing in the 2012 Games, Team GB revamped their coaching and leadership. This led to a shift in mindset and Byrnes believes that it’s now harder than ever to make the team. “I think it’s very competitive, I think it’s really hard to get on that team because they’ve raised the bar…there is a real emphasis on doing your pb [personal best] at the major competitions, there’s no room for sentiment at all.”

The real question is whether or not this will lead to more podiums.

“Next year for British medals I would be looking mainly at men at the moment, although there are a few women actually that would have something to say about that. I think with the men they have very good relay teams, whereas with women it’s individuals like Freya Anderson, Anna Hopkin, Siobhan O’Connor. You never know, a lot of them are top six at their events.”

For individual men Byrnes said the standout name remains Adam Peaty, who will look to defend his world record in the 100m breaststroke. Byrnes says he has transcended the sport with his personality and social media. “He’s just all about winning and he’s not ashamed of that.”

Despite Peaty’s popularity, there are times when Byrnes will have an exclusive story with him, yet no mainstream newspaper or sports website will want to publish it, which highlights that, in media terms, swimming is something of a ‘once every four year sport’.

Nevertheless, Byrnes continues to plug away – she has the access because of relationships she can build when nobody else is paying attention. While the largest media outlets parachute a reporter in during an Olympic year, she is on the front line as swim

These athletes are looking to find more support and competition in the other three years and 11 months of an Olympic cycle, and last year may have heralded a new dawn. In 2019 the International Swimming League was formed with five teams in North America, four in Europe and one in Asia.

Byrnes says the swimmers really love the ISL because it gives them another chance to compete, and for journalists it’s one more chance to get the word out. But will it make the common sports fan pay more attention? “If it’s going to get any attention it might be more so next year, in the wake of Tokyo.”

You can follow Byrnes @LizByrnes14 on Twitter to see all her work on swimming and football. She will be in Tokyo writing for the in house media news service.