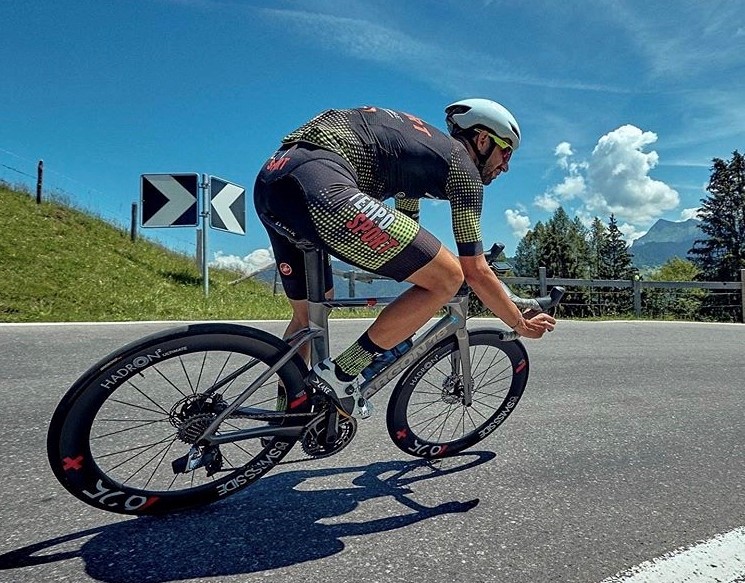 In 2014, Ahmad Badreddin Wais embarked on a dangerous getaway journey from his war-ravaged home in Syria.

Wais left behind the country he was born in. The one he grew up in. The one where he discovered his love for cycling and trained every day.

The journey proved to be long and torturous.

In fact, it wasn’t until five months later when Wais arrived at his final destination, that he would eventually gain his refugee status.

This final destination was Switzerland. A fresh start. A new life.

Wais was a student in Damascus when the Syrian Civil War broke out in 2012.

Despite the mounting unrest and violence, he continued to reside and train in the Syrian capital through 2013.

By this time, his family had already fled their hometown of Aleppo for neighbouring Turkey.

In Syria, military service is compulsory, with men aged 18-42 required to serve.

“For me, it was a really hard situation to stay there,” says Wais.

“I was wanted by the military and it was clear that I didn’t want to be part of the war.”

Wais had bought himself some time by going to university, but the prospect of being forced to enrol in the military was only a year away.

With this in mind, and the ever-increasing violence in the country, the only way for Wais to escape the war was to flee Syria.

Rebuilding a life and a career

The five-month journey from Damascus to Switzerland understandably took its toll on Wais, both physically and mentally.

Exhausted, he temporarily put his career on hold.

It was this subsequent period of recuperation that proved to be the most difficult part of transitioning and adapting to life in Switzerland.

“The biggest challenge in my life was to continue cycling in Switzerland,” he explains.

“It was a hard time because I had to start again from zero which was really difficult.”

Reflecting on the other challenges he faced integrating into a new community and a different way of life, Wais pays particular credit to the powerful tool of sport.

“Sport is very, very important in my life because it helped me to stay strong in Europe and to continue with my life,” he admits.

“It helped me to keep challenging, to keep moving and to keep my mind open.

Wais returned to competition in 2017, and quickly rediscovered his love for cycling.

“Cycling is very important in my life and I am thankful for it,” he says.

“It allows me to forget all the hard times like the war, and also having to leave my country and travel very far away from home.”

With an established training schedule and some semblance of a normal, settled life, Wais competed at the UCI Road World Championships in 2017, where he finished an impressive 60th in the individual Time Trial.

Clearly encouraged by his performance after three years away from competition, Wais returned to the World Championships in 2018 and 2019.

Further levels of impressive consistency followed at both events, attracting the interest of many involved within the sport.

His biggest achievement on the road, however, came earlier in 2019, when he finished ninth in the individual Time Trial at the Asian Cycling Championships in Uzbekistan.

It was after this particular performance that Wais was approached by Gonzalo Barrio, Project Manager for the Refugee Olympic Team.

Aiming for the Olympics

Wais is now one of the 50 athletes currently listed as a Scholarship-Holder on the Refugee Athlete Support Programme ahead of the Tokyo 2021 Olympics.

While inclusion on the shortlist is only a first step towards securing a place on the final Refugee Olympic Team for next year’s Games, Wais remains appreciative of the extra support he’s received.

“Before when I was riding for Syria everything had to be organised by myself, but this year as a Refugee Athlete Scholarship-Holder I’ve had big support from the Olympic Committee [IOC].”

With the Tokyo Olympics, like all major sporting competitions this summer, postponed because of the coronavirus pandemic, Wais will now have to wait until 2021 to find out whether he has a spot on the final Refugee Olympic Team.

However, as he explains, the added year of preparation may well prove beneficial to his chances.

“For other athletes it’s not great, but for me it’s actually better.”

“I’m happy to have one more year to train for the Games and to get to a higher level.”

Wais is currently training for the UCI World Championships that take place in Italy at the end of the month, and admits this year’s event will have added significance.

“In the past years I have been riding for Syria, but this year will be special for me as I will be with the Scholarship Refugee Olympic Team,” he says.

“I will do my best and it will be a great chance to find out where I need to work harder for the Olympics.”

Looking ahead to next summer, Wais has stopped working part-time to ensure he is fully focused on achieving his Olympic goal.

As he explains, this was an easy decision to make considering the enormity of the opportunity.

“The Olympic Games is something very special for all athletes and something we all dream of.”

“I would feel really happy and proud to be with this team.”

With each of the other 49 Scholarship-Holders similarly having their own aspirations and motivations, Wais is under no illusions that securing a spot on the final team will be touch-and-go.

However, what can be guaranteed, is that Wais, having already overcome so many challenges in life, will give it his very best shot.

He reflects this very sentiment with one final, concluding statement.

“It will be hard work, but I will give all I have to be there.”