Arsenal 1 Leeds United 0 (Nelson 55) Arsenal had to fight to see off Leeds United in the third round of the FA cup at the Emirates stadium on Monday night. Reiss Nelson's second half goal proved to be enough for the Gunners to claim the win which earns a trip to Bournemouth

https://soundcloud.com/peter-white-185942145/phil-hay-and-jon-mackenzie-discuss-marcelo-bielsas-impact-at-leeds-united A week has passed since the city of Leeds blew a huge sigh of relief, as its football club announced head coach Marcelo Bielsa is to stay at Elland Road for at least another 12 months. With minimal changes to a playing squad that finished a lowly 13th in the previous campaign,

Sergi Canos inspired Brentford to an impressive victory at Griffin Park that leaves Leeds with a huge mountain to climb in the fight for automatic promotion to the Premier League. Neal Maupay struck his 27th goal of the season on the stroke of half-time, before the impressive Canos doubled their lead shortly after the hour

The stage is set for arguably the biggest game in the Championship season so far as Leeds United entertain promotion-rivals Sheffield United at Elland Road this Saturday lunchtime. The fixture has been earmarked by many as the most significant game in Leeds’s recent history, including stalwart defender Pontus Jansson who has 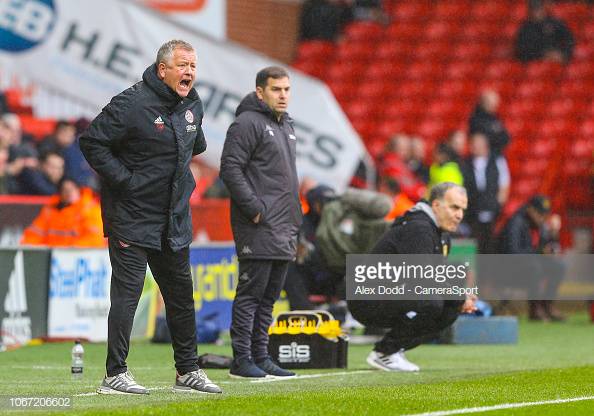 Chris Wilder has taken a leaf out of Marcelo Bielsa’s book by making a key tactical admission ahead of Sheffield United’s clash with Leeds United. He revealed leading striker Billy Sharp will start the match at Elland Road after being left on the bench for the Blades’ previous two matches against Rotherham and Brentford. Breaking