Posted on 5 April 2018 by Matthew Horsman

The beauty of the Commonwealth Games lies in the number of athletes competing who can genuinely class themselves as amateurs right at the top of their sport.

Zach Courtney, a man mountain from the Scottish capital of Edinburgh, certainly falls into this category.

Currently studying podiatry at Queen Margaret University on the banks of the Firth of Forth, Courtney is on his way to his first Commonwealth Games to proudly represent Scotland on the Gold Coast as a weightlifter.

He receives no funding, and is only able to devote the amount of time he does to his training due to the generous student loan programme in Scotland, but for Courtney it’s all worth it to get the chance to compete on the big stage.

For a large part of his childhood the Commonwealth Games were the target – but in a different sport altogether.

“I was a British age group medalist for swimming when I was younger,” Courtney explains. “I started doing a bit of conditioning work at school when I was about 12 or 13 and then I really got into it and I really enjoyed it.

“I spent so many years doing swimming I just fell out of love with it – I didn’t really want to do it any more.” 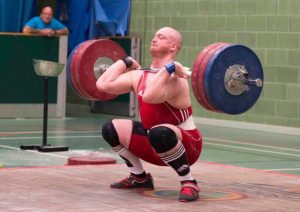 Having lost his passion for a sport he excelled at, Courtney needed a new challenge and found his inspiration while sitting at home watching the television.

“I watched the 2008 Olympics,” he said. “I watched this guy in my current class at the moment called Andrei Aramnau and he was just unreal! He snatched 200 kilos when he was 18. That’s a world record – no-one has got near it ever since.

Courtney is only turning 24 during the games, but he has been training like an elite athlete for so long he feels like an old head on young shoulders.

“When I was swimming I would probably do four hours of swimming a day,” he said. “I was 12, whereas now I would say I only do between eight to ten hours of weightlifting a week. There’s a big difference.

“It’s easier going but it’s a lot more mentally and physically taxing even though you do a lot less.” 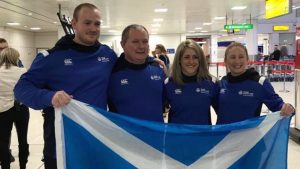 The role that the short, sharp nature of a weightlifting training programme is playing on his body became evident when he suffered a freak injury on a night out that cast Courtney’s entire involvement in this month’s games into doubt.

“I stumbled down some steps and I felt a tweak,” he said.

“This was mid 2016 and my lifting was really good back then – I was a lot stronger but not as technically good, not as efficient.

Despite recovering to be able to post good enough scores to qualify for the Games – the problem has still not been properly fixed.

“The qualification period was from September 2016 to September 2017 and it was killing me the whole way through. It’s better now but its not like it was – I still don’t back squat because it hurts.” 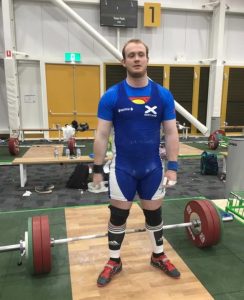 Logically, throwing hundreds of kilos of metal weights over your head isn’t a great idea if you’ve still got a sore back, but for Courtney the Games come as a chance to redeem himself for missing out in Glasgow four years ago.

“Should I have made the team? Back then it was on a total so you had to get a 300 kilo total and if you made it you went.

“At the time was I capable of making that total but my technique and efficiency and my lifts weren’t anywhere near as good as they are now.”

Rather than dwelling on the past, Courtney is the sort of athlete – and man – who chooses to see the positives and can’t wait to make his Commonwealth debut.

“The good thing about the Commonwealths is that it will be ‘balls to the wall’,” he said. “Everyone will just go super heavy so it will be good to watch.

“My lifting has been getting so much better, so much more efficient over the last two years. I’m not as strong as I was so all I need to do is just fix certain things out, get my back more mobile, theres a lot to work on which is quite promising.”

Courtney himself intends to go ‘balls to the wall’ as, despite using this games to build up his experience, he believes that winning a medal is not hugely out of reach.

“The Commonwealth Games is a funny one,” he explained.

“Gold medal – no. The gold medal will be quite a bit higher but the bronze medal varies a lot.

“I’ve had a look at the last 20 years of Commonwealth Games and it really depends on what people lift.”

He acknowledges the obvious nature of the statement with a chuckle before explaining in more detail.

“In weightlifting you get three snatches and three clean and jerks,” he said. “It really depends on who makes what lifts, but I think if I lift to my ability I would be somewhere between 6th and 3rd if I lift well – if I lift really well.” 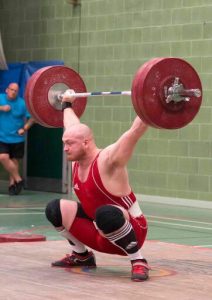 As our chat comes to an end, we begin to focus on the elephant in any weightlifting room – doping.

Before the Olympic Games in Rio in 2016, male and female athletes from Azerbaijan, Armenia, Cyprus, Kazakhstan, Moldova, North Korea, Romania, Turkey, Ukraine and Uzbekistan were all banned because of failed doping tests.

Four years previously, at London 2012, the 94 kilo weight class was a source of much public embarrassment for those attached to the sport.

The fact that Zielinski was then subsequently banned from the 2016 games because of doping highlights the farcical nature of the presence of illicit drug taking in the sport.

Courtney recognises the problem but remains pretty philosophical about it.

“There has always been a problem with doping in weightlifting,” he said. “It’s like that in any sport. But UKAD are pretty good on it.

Asked if it frustrates him that he is competing against people that he knows are cheating, Courtney pauses before delivering his final line.

“The way I see it is as long as I’m clean and as long as I lift to the best of my ability then I can’t really ask for much more.”

His response sums him up as an athlete, as a man, and – fingers crossed – as a future Commonwealth Games medalist.