Posted on 21 December 2020 by Lukas Flottmeyer

It’s an early Christmas gift for basketball fans and a holiday work trip for players. Just 71 days after the Lakers clinched the 2020 NBA Championship, games are back underway tomorrow.

This season will look a little different with just 72 fixtures per team – traditionally 82 – and the first ever play-in tournament to decide the final playoff seeds from each conference.

The league has a great explanation about how this will work, but should it be attempted at all? Two Sports Gazette writers take a side:

Mitchell Marshall: OK, we get it. COVID wrecked everything: the NBA doesn’t want to lose money and they couldn’t hope for ticket sales until Easter. It’s still inexplicable for a league that executed a flawless COVID bubble to decide they need to rush back to thousands of people flying across the United States when a vaccine is on the horizon. They could only schedule half the season to start!

Lukas Flottmeyer: Surely, money was the main factor for starting the season on Christmas. But we shouldn’t forget that the NBA AND the National Basketball Players Association (NBPA) agreed to start the season earlier than expected. Is it smart to fly in the middle of a pandemic through the US? Possibly not, but it’s the players’ responsibility to remain COVID-safe when staying with their loved ones. Understandably, athletes don’t want to play a 72-game season in a bubble away from their home, wife, and children. However, by scheduling just half the season, the NBA made sure to have the option to reschedule games that have to be postponed because of COVID-cases.

Mitchell Marshall: Scheduling half the season is a singular responsible idea but: Money. Is. King. The NBA gets a lot of due credit for progressive stances and putting players well-being first. That has clearly hit its limit. 72 games is exactly what they need to get all of the TV contract money. Which seems more important than proper rest or waiting for revenue from tickets. However, mass rescheduling like we’ve seen in the NFL and MLB is inevitable. One breakout and a full week has to be reshuffled for at least three teams. Players agreed to it because they don’t want the salary cap to go down in coming years, so they have to risk it . Owners needed to be the responsible side on this one.

Lukas Flottmeyer: It’s not just the league or the wealthy players and owners who’d lose money; the team staff, league, and arenas would be hit the hardest. The latter might even cease to exist. How does a security guard who’s working at Madison Square Garden explain to his little daughter that Santa has no New York Knicks jersey for her? How does a shop assistant at the Staples Center explain to his son that Santa has no new LeBron 18 sneakers’ for him? How does a sound technician at Dallas’ American Airlines Center explain to his kids that Santa has no new headphones for them? By starting the season near Christmas – one of the most important days in every NBA season – the NBA makes sure that a lot of workers are able to return to their jobs.

Mitchell Marshall: First of all, nobody wants a Knicks jersey right now. Dear parents of New York – coal is just as useful as a Julius Randle jersey. The NBA has actually talked for years about moving the start of the season to Christmas. That way they can own part of the summer viewership where the only competition is baseball most years. Yet after ratings were terrible during great basketball in the bubble they may want to go back to normal. Meaning back to back short off-seasons. So LeBron won’t be the only one complaining come next fall. More injuries are on the way, doing great harm to the fringe players with shorter careers. 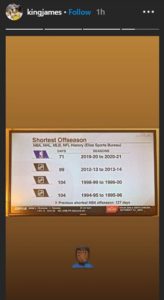 Lukas Flottmeyer: We see it in the Premier League, the Bundesliga, and elsewhere that this year’s seasons are more demanding than others. Off-seasons are shorter, there aren’t any long breaks between games, and the crowds that get the extra 10 percent out of a player’s performance are still missing. Though, we shouldn’t forget that a lot of NBA players haven’t played or trained since March. The NBA is not just LeBron James and last year’s champion Los Angeles Lakers: the NBA is Matthew Dellavedova and the Cleveland Cavaliers as well. Like everyone else who had to work at home the last months, players are desperate to go back to their facilities to train and play. Detroit Piston’s centre Andre Drummond recently admitted that he felt miserable and mentally drained; and he won’t be the only player feeling like that.

Mitchell Marshall: Eight teams haven’t played since March, another six since August. Half the league is coming back from a much shorter off-season than normal. It can’t be a choice of who to cater to. It just means another season with frequent nights of ‘load management’. I can’t wait to turn on the Lakers vs. Clippers game where Kawhi Leonard and LeBron James sit out and Anthony Davis plays 15 minutes.

Lukas Flottmeyer: The NBA safety protocols for this season seem well thought out and manageable. The league did everything they could to make players, staff members, and – if allowed by the accountable state’s government – fans safe. After a safe and entertaining bubble at the end of last season, we should trust the NBA’s judgement and cross our fingers that their protocols will work out again.

Mitchell Marshall: We can absolutely trust the NBA as much as any league to take all precautions. Travel parties will be half that of a Premier League team and 20% of an NFL team. There will still be breakouts and the chance for serious long term respiratory damage if it hits the wrong guy at the wrong time. The league will purchase a vaccine as soon as that is a viable option, but the season could’ve waited until January 18th for a clearer picture. That is Martin Luther King Jr. day and the original planned restart. However, ESPN reported that the NBA would lose $1 Billion in the long term if they waited just that single month. I understand that it trickles down to the humans making less money in the industry, but we are also talking about the long term health of everyone involved. The league considered starting as late as March but somehow tomorrow we have basketball.

Lukas Flottmeyer: The short off-season and – especially for the playoff teams of last season – the reduced time to be in mental and physical shape for the new season could add an interesting element this year. Can a team like the New York Knicks profit from a long absence in the playoffs? Will Luka Dončić produce more magic? Finally, will the Toronto Raptors – who play in Tampa Bay this year because of stricter rules in Canada – be able to cope with their makeshift circumstances in the sunny state of Florida? An exciting season is awaiting us, and everyone should be excited to finally start watching NBA games again.

Mitchell Marshall:  I remember being in downtown Salt Lake City the night the world came to a halt as Rudy Gobert tested positive in Oklahoma City. You could see the looks on strangers’ faces as they glanced up from their phones and the whispers spread like wildfire. Twitter lit up and everyone I knew at the team and in local media went into a frenzy. (Full disclosure: I have previously worked for the Utah Jazz)

All this time later, I sit in London under the recently invented ‘Tier 4’ restrictions as football leagues in Europe crack on. I am excited to be entertained by basketball. I just still have to wonder if it’s the right thing, or just the inevitable.

Let us know what you think about the NBA season and join the conversation on Twitter.

One thought on “The NBA Is Back!… But Should It Be?”