As a football club, Brentford boast one of the most statistically conscious and astute models in the country.

The club’s emphasis on using data to analyse player performances, as well as to recruit undervalued players with potentially huge sell-on values, has been the driving force behind them reaching, and surviving in, the Premier League.

We looked at the numbers behind the Bees’ impressive 13th place finish and ahead to what Thomas Frank must do this summer to avoid the dreaded ‘second season syndrome’.

Brentford’s fairy-tale signing of free agent Christian Eriksen in January was not just romantic. They needed him.

After a limp home defeat to Newcastle, in which Eriksen made his debut as a late substitute, Frank’s side were on a run of one win in 11 games, 15th in the league and looking over their shoulder.

In their remaining 11 Premier League games with the Dane, Brentford won seven and drew once to ensure survival was guaranteed with two games to spare.

Eriksen’s creative influence on the team can be seen clearly in Brentford’s expected goals before and after his arrival. 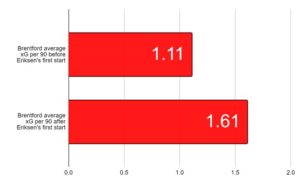 Since his return to the Premier League, Eriksen’s creative output per ninety minutes compares favourably to almost any midfielder in Europe’s top five leagues over the last year.

His instant and impressive impact on Brentford’s season was underlined when he was voted Brentford’s player of the season by readers of the BBC Sport website despite only playing his first minutes in February.

One thing Thomas Frank and his staff did not do during Brentford’s dip in form over the winter was panic. They appreciated their fixture list during that period was difficult and their data-based approach indicated this dip was likely just temporary.

Frank’s team has exuded the same calmness he has, refusing to overreact and allow nerves to enter their game when matches are not going their way.

Only Liverpool, with 20, took more points from losing positions than Brentford’s 15 all season.

As well as this, Brentford scored 31% of their goals in final 15 minutes of matches with only Brighton and Watford registering a higher percentage. 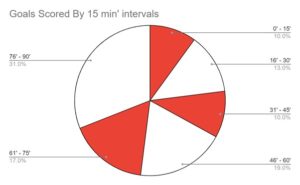 It was the Bees’ willingness to fight to the end that ultimately saw them score the goals that secured their top-flight status.

Another Danish Christian, this time Norgaard, has been equally as important to Brentford’s success this season.

The 27-year-old defensive midfielder has played 35 times this season, seamlessly transitioning from the Championship to the Premier League.

He has made the most tackles, and tackles in which the tackler’s side win the ball, in the entire division, whilst also being in very high percentiles for other key defensive statistics when compared to other midfielders from Europe’s top five leagues.

Norgaard’s importance to this team going forward was emphasised in January, with his impressive performances being rewarded by a new four-year contract. His value to teammates and fans also reflected this with him being voted Brentford FC Supporters’ and Players’ Player of the Year.

For years now Brentford have been regarded as set-piece innovators. They were one of the first English clubs to employ a set-piece coach and dedicate significant time practicing them during training to maximise their chances or scoring in game.

The Bees utilise different strategies from corners and free kicks depending on the position and opposition but almost always have at least one player on the goalkeeper and three or four deeper in the penalty area looking to attack the ball.

In Ethan Pinnock and Mads Bech Sørensen have two players with long throws that have been used to create chaos in the opposition penalty area.

Thomas Frank believes emphasising set-pieces gives his side an edge and the stats this season back him up. Only Liverpool, with 99, made more completed dead ball passes that lead to a shot attempt than his side’s 83 last season.

Brentford scored 16 out of there 48 goals last season from set pieces, with just the top two of Liverpool and Manchester City managing more.

A Look to the future

Ivan Toney was no doubt the main man when it came to goals for Brentford last season. The 26-year-old registered 12 goals and five assists. Only Wilfried Zaha, with 14, scored more for a team that finished in the bottom half of the table.

However, a three-game absence through a thigh injury in early February showed how reliant Brentford are on his goals. The Bees only goal in that period was a late consolation in an away defeat to Arsenal and they failed to register again the following week against Newcastle as Toney made his return as a second half substitute. 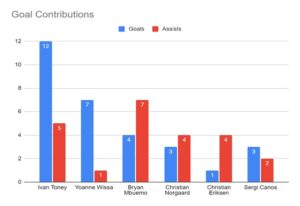 Toney’s strike partner Mbuemo, whilst impressive in spells, only scored four times in the league making signing a reliable finisher imperative should Toney pick up any injuries next season.

Thomas Frank has the luxury of many of his key players safely under contract so widespread changes in the summer are unlikely. Two other areas that should also be considered vital to strengthen in however, are goalkeeper and right-sided defender.

Loanees Alvaro Fernandez and Jonas Lossl have returned to their parent clubs after both flattering to deceive when first choice keeper David Raya missed four months through a knee injury. Should a similar incident occur next season, a suitable backup is imperative.

Winger Sergi Canos was used as a right wing-back for much of last season to varying degrees of success and after moving to a back four, Frank opted for Christoph Ajer to play on the right. With Ayer likely to move back into centre-back next season there is a clear area for the Bees to strengthen.

Finally, there is the small matter of trying to keep hold of Eriksen amid interest from many of the country’s elite clubs. In the Dane Brentford have a genuinely world-class player and, although it will be difficult, they must say anything, and offer everything, they can to convince him to stay. He’s that good.

Stats and data courtesy of: