Posted on 7 December 2018 by Darren Barnard

Britain. 1926. A year remembered for the general strike and the birth of Queen Elizabeth II. A horse-powered country that was still recovering from the devastation of the Great War. Millions were still restricted to strict rationing. Just 8 miles away from Hyde Park corner a new social hub for the wealthy had just been founded, Ham Polo Club.

In arguably the most rural location possible in the city, just on the outskirts of Richmond Park, sits the last remaining polo club in England’s capital. Originally known as Ham Common Polo Club, it boasted one full size ground and two smaller grounds, along with the first Argentine 10 goaler, Johnny Trail as a regular coach.

You might be wondering what on earth is a ten goaler? Each player receives a handicap based on his polo skill. In the UK this is awarded on a scale ranging from minus 2 to 10 with 10 being the highest. It is so difficult to attain a 10 goal handicap that less than two dozen players in the world have managed it. They are all Argentinian.

Many clubs struggled to continue in a war-torn Britain throughout the late 1940s. Ham Polo Club would have also been forced to close it gates forever if it wasn’t for one man. William Francis Walsh, universally known as Billy, was returning from his service in 1946 and found the owner of the stables where he worked had died. The stables were now on the market.

Walsh decided to buy the stables and revive the club under HPA (Hurlingham Polo Association) rules. It is widely considered that Billy, along with Lord Cowdray and Arthur Lucas, were solely responsible for the rescue and continuation of polo in post-war Britain.

Walsh helped run the club in the decades that followed before his death in 1992. Since then, numerous prominent figures have sat on the committee including the late Leicester City owner, Vichai Srivaddhanaprabha, who was club president between 2008-2012.

Two of the men responsible for running the club today is vice-president, Col. Geoffrey Godbold OBE, TD, DL and chairman Howard Davis. They’ve had to cope with depleting number of members during an ever-changing economy, particularly the 2008 financial crash.

“Memberships are down, primarily because of the financial crisis, not entirely because of that, there were other things too.” Davis said. “What happens with these things is people get excited, they’ve got money, they want to do something. They particularly want to pose at polo and show their friends – how silly they are.”

Eventually the numbers reached a plateau over the last decade. Although there’s been a slight reduction in members more recently whilst smaller clubs such as Ham have experienced difficulty in hiring Argentinian grooms that are willing to work for six months in the summer. This is more attractive to the clubs economically compared to a UK groom who is going to want the security of working 12 months of the year.

It is common knowledge that polo is a sport for the rich but what exactly are the costs?

Godbold lays them out: “HPA is about £200 for the year – you’re talking money the whole time. The insurance is third party, they provide that but then you would have to get personal insurance which is going to be another 100-200 pounds even if you just do it for the season. So you’re going into the hundreds of pounds just to register to play.”

Not quite jumpers for goalposts. On the other hand that isn’t what polo was invented for. If you want a cheap, cheerful, casual-commitment sport, polo certainly isn’t the one for you.

Davis added: “It’s a lifestyle thing and lifestyle things are always naturally time-consuming and if not all-consuming. But that’s the beauty of it because you can bring your kids along, you can bring your friends, you can have Sunday lunch, you can play or not play as you wish in a club like this. It’s a real nice way to live your life. It’s more than just going to the park to play football on a Saturday morning.”

The inclusiveness of family and friends is something that the sport and Ham Polo club prides itself on: “Polo is something that is very inclusive.” Said Godbold. “You are not creating grass widows, you’re including them and they get fed very well.” 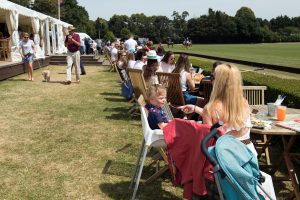 The sport goes beyond the skill of what you are doing. It is also about the thrill of moving at highly-dangerous speed on a horse combined with the cathartic rush of surviving once when the game has finished. In this sense, it is comparable to being a Formula-One driver.

Davis described the rush of polo: “You’ve got a hard ball being hit by people at 60mph. I recall the adrenaline buzz building up as you’re going to play and then that wonderful feeling afterwards, regardless of whether you won or lost, the relief of being back on the ground in one piece is really what the excitement is about.”

At which point Godbold interjected: “The problem is the adrenaline buzz becomes addictive and people keep on playing, long after they should have stopped and long after they can financially afford it. That’s one of the dangers of polo.”

The extortionate costs of playing  prevents most players playing all-year round. Ham Polo club has matches, competitions and events from the beginning of May until September. The majority of people go back to their day-jobs because they can’t afford to play summer and winter time-wise and financial-wise.

To play all year round, you will have to move from country to country that includes the States, Argentina, Dubai and many more.

Davis reiterated: “Imagine if you want to play in three countries –  you have to have ponies in each, places to stay which means having your own lodgings – you’ve got to be a serious high-roller and there are people with serious money in polo, why wouldn’t there be? That’s the whole point. However – most people in polo are not in that league.”

There are around 1700 registered players based in the UK and the number of individuals who can actually afford to play 12 months of the year is likely less than a third of that figure. In other words, you have to be very good at polo and very wealthy to be able to cover the costs.

One individual who falls into that category is Adolfo Cambiaso. The Argentine is a registered at Ham Polo club and is widely considered the world’s best polo player.

Godbold discussed Cambiaso with delight: “He would be earning over a million in fees for playing. He would spend a lot of the winter playing in America; the fees there are out of this world. It’s mostly competition and selling horses which they’ve all done and demonstration matches for charity and things like that.”

Whilst travelling across every corner of the globe, Cambiaso also finds time to clone ponies. This has created an ethical dilemma. Traditionally polo was about having a mixture of horses and training them to be ridden competitively.

Davis is against cloning: “It’s too scientific. It’s losing the charm and the way it was always done is going.”

Godbold agreed: “It’s going to damage the competitiveness, you have one team that is purely got brilliant horses produced by Adolfo.”

Cambiaso is one of the ninety or so Argentinians who make up the top hundred polo players in the world. This dominance dates back almost as far as Ham Polo Club. In the fifties and sixties they were briefly rivalled by the Indians because they lived where polo was first played after Britain’s colonisation.

Godbold said: “I can remember going to Cowdray in the fifties and Prince Phillip was playing – so it was obviously quite a high focus day and in the pony lines all the Indians were dressed in turbans and their riding kit and all the Argentinians were dressed in gaucho’s kit.”

Like all sports, polo has adapted and evolved over the years. Yes, there’s a healthy market for the elite members of society to turn up play recreationally such as Prince William and Prince Harry. On the other hand, more dedicated polo players are now swapping the post-game champagne for a gym session to maintain their fitness. The commitment has increased drastically. At Ham Polo Club players will be playing up to four times a week. There’s also been a rise in equestrian sports such as hunting among the wealthy so they can transfer skills they learn from them across to polo.

Although the world may look entirely different from 1926, whether you’re paying or spectating polo, it’s an opportunity to escape and engage in a sport like no other. This is exemplified by the success of Ham Polo Club. Polo is here to stay.