Posted on 2 January 2019 by Darren Barnard

Sydney Cricket Ground. 1999. Over 40,000 Sydney-siders are cheering on Stuart MacGill as he takes seven wickets to seal another famous Ashes series victory for the Australians. Tens of thousands in the stadium are following every ball intently on their handheld radios.

Fast forward two decades and one of those spectators, Adam Collins is now a cricket correspondent for the Guardian, Wisden and ESPN Cricinfo to name a few. Collins insists that cricket on the radio has forever been the soundtrack of the summer for him and many other Australians. Himself and The Final Word podcast colleague, Geoff Lemon are the voices that children listened to whilst they were running around the house, whilst their parents wash the car or even for fans who have made the pilgrimage to the UAE to watch the Pakistan v Australia Test series in October.

Although they were not the first freelances to buy the rights, their achievement should not be understated. Guerrilla Cricket purchased the rights for Ireland’s inaugural Test match against Pakistan last May. More recently, Collins and Lemon followed in their footsteps and purchased the exclusive radio rights for Australia’s first Test series since the ball-tampering scandal that shook the world of cricket in South Africa.

But how did a cricket journalist afford these rights in a cricket world that consists of superpowers such as Channel 9 and ABC?

Collins said: “I realised I had the means at my disposal, albeit on the credit card, I’m not going to pretend I’m wealthy, I’m not. I knew there was a way of monetising it, commercialising it. I had a confidence we’d be able to secure the money back once we got the rights and once we had paid for all the talent, which was a very expensive process with my limited amount of money.”

When compiling a team he insisted on a balance between former professionals who could refer to their expertise on the game alongside correspondents who could offer a journalistic element, who not only reads the play but also guarantees the listeners are having the picture painted for them. This was achieved by recruiting the likes of former International cricketers Mike Hussey and Bazid Khan, along with Peter Lawler who has been an Australian cricket correspondent for over 15 years.

The true commentary gold dust is when illustrious broadcasters have learnt the craft post-cricket such as the late, Richie Benaud. Unfortunately, not all cricketers who pursue a career in TV and radio commentary are as comfortable and eloquent in front of the mic as the former Australian all-rounder.

When asked about the imbalance of former professionals taking up all the seats in the commentary box, Collins answered: “You can perhaps look at Channel 9, they have received criticism of their broadcasters and how insular it got in some quarters, not all of them but some parts of the show became boorish. That would have potentially be evened out if there was a greater emphasis on a decent compliment of people who are journalistic broadcasters.” 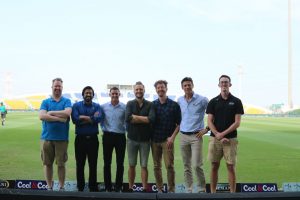 Criticism towards the insular nature of cricket commentary boxes isn’t unique to Channel 9, who recently lost the Australian TV rights to a combination of Channel 7 and Fox Sports. It is just as relevant when discussing the dynamics of commentary teams in the UK, such as Sky. In Australia and England it can be very difficult for journalists to breakthrough due to the longstanding teams that have been in place across all the major broadcasters.

One of the creative ways individuals have overcome this is producing a product that is an outright alternative to the more traditional and stereotypical manner of broadcasting. This is catered to by the likes of Guerilla Cricket and WhiteLine Wireless, which is where Collins and Lemon first picked up the mic.

The UK-based cricket writer stressed that he didn’t intend on the Pakistan v Australia Test series sounding like a backyard operation. By no means is that a pejorative, but he had an altruistic belief that Test cricket should be on the radio. Therefore, when the opportunity presented itself for reasons such as the ball-tampering scandal in the South Africa series that preceded it and other logistics, he saw a window of opportunity.

Collins certainly hasn’t lacked an entrepreneurial streak in his cricket-writing career so far. Prior to becoming a sports journalist he spent nearly a decade of his life working for the Australian prime minister and deputy PM. Dedicating the majority of your time in your twenties is a commendable sacrifice for anybody, although to give it up in order to move into a profession where there’s less money and less job-security could be considered a greater sacrifice.

On his time in government and whether he would return to politics, Collins said: “I work a lot of hours now but nothing compares to what we did collectively during those six years we were in government. That was full on. That was very stressful. The short answer is no. I wouldn’t trade it back in to work as a political adviser again.”

Around the beginning of 2015, Collins made the decision to make the plunge and work as a cricket writer for six months for West Indies Tour of Australia and the first two Tests matches of the Ashes. He would then come home and figure out whether he would be able to pay his mortgage and reassess his situation. It quickly became apparent that he would be able to sustain a living in his new career.

Despite the success of Collins’ career to date, he is not ignorant of the fact that he did have some structural advantages when first setting out that he may have taken a while to appreciate. He admitted that his first piece came about through virtue of leveraging off contacts from his former political life to get it published. In turn, the piece went viral and subsequently morphed into a weekly column with ABC during the 2013/14 Ashes.

Collins admitted that the advantages of starting out as a freelancer were not limited to his former political career: “I’m a straight white male from Australia who is of a certain age. I wouldn’t want to be a non-white woman coming out of university trying to do what I do in a blokey sport like cricket, that would be hard initially.”

The Australian’s risk-taking, business development and nuance has undoubtedly helped establish him as one of the leading writers in cricket today. This is not unique to Collins either. His Guardian colleague, Vithushan Ethantharajah originally graduated from university with a degree in chemical engineering and is also considered one of the leading cricket writers at the moment.

There is an argument that a surprising amount of people can actually make an affordable living at the rudimentary level of the game and although the barrier of entry for cricket writing is quite low, it is a whole different question of actually being any good at it. Collins added: “You don’t just become a good cricket writer because you like cricket and you don’t just become a good journalist because you watched the Newsroom. You need to work on it and develop the craft.”

His intuition and strategical nous helped him establish a partnership with Wisden to make the broadcasting of the Pakistan v Australia Test series possible. He stressed the fact that the Pakistani cricket board only sold the rights to him because they had faith in what he was doing and claimed it would have been embarrassing for them had he been a charlatan.

Collins on why he opted for Wisden: “What they contributed was the brand name giving us credibility, social media platforms. More to the point, I wouldn’t have done it with anyone but Wisden, I’m part of the family there. Theoretically, I could have done it with anyone, that’s my point, this is something where the knowledge and power doesn’t all reside with me.”

The knowledge and power may not all reside with Collins but he has certainly laid out a template for future journalists and companies who may aspire to emulate his business model. Could more journalists follow suit?

“I wouldn’t say I’ve opened a can of worms, that would be overstating it, but a lot of people have realised it is possible. I think I have got a business model that is sustainable, repeatable and profitable. I think I will at some stage be able to collaborate with existing platforms. You don’t need the set up of a traditional radio station to do what we did in the UAE.”

Collins definitely had advantages being the first-mover in the market and being able to produce a commentary team with a wealth of knowledge due to the contacts that he has formed over the years.

Nonetheless, he has definitely presented the possibility to other journalists working in the new media to break down barriers and broadcast at the highest level of the game. Hopefully a sea of change is on the horizon for more podcasters, writers and presenters to work at the upper echelons of the game.

Ultimately, it’s impossible to predict the ceiling for aspiring cricket journalists. Collins pondered: “How long it’ll be until the podcast becomes the broadcast in regards to the amount of people you can reach compared to being on the radio on a live analogue media.”

On the other hand he reiterated: “I don’t think many people will be jumping from podcasts to the commentary box unless they’ve got some kind of breakthrough that Geoff and I had.”

What cannot be disputed is that this makes cricket more accessible and a broader experience for people than it has been in generations past.